Game modes for this mod:

Campaign: Play in Tron City as The Renegade. Complete all objectives to win.

Team DeathMatch: Play in the Tron City. Kill all units on enemy team, use disc or another selectable weapons in the armory

Run/r: Run! avoid, destroy and jump some obstacles to reach the Goal. Use Companion, Jetpack and disc. Random runway everytime you play. Bonus Zone too!!!

Objective: Play in the Simulation Sea (Program Side), Deffend your lightjet until arrive to portal, use back o front turrets.

Elimination: Play in the Simulation Sea (Sentries Side), Destroy the lightjet before arrive to portal, use fighters.

Vehicle CTF: Play in the Lightcycle Arena. One flag, 13 random goal regions, 5 minutes of game, if team points are == add 30 secs to timer until =/=

Survival: Play like virus team, infect all sentries to win

Wave: Play in Tron City. A group of programs try to survive to the infection in the system defending the portal to get out. Prepare your defenses, they came for you...

Hunt: Play in Tron City. Sentries and Programs have to Kill all infected programs. Clean the grid! Each enemy that you kill will play yor you a short time.

IMPORTANT! YOU NEED THE 1.3 PATCH TO RUN THIS MOD 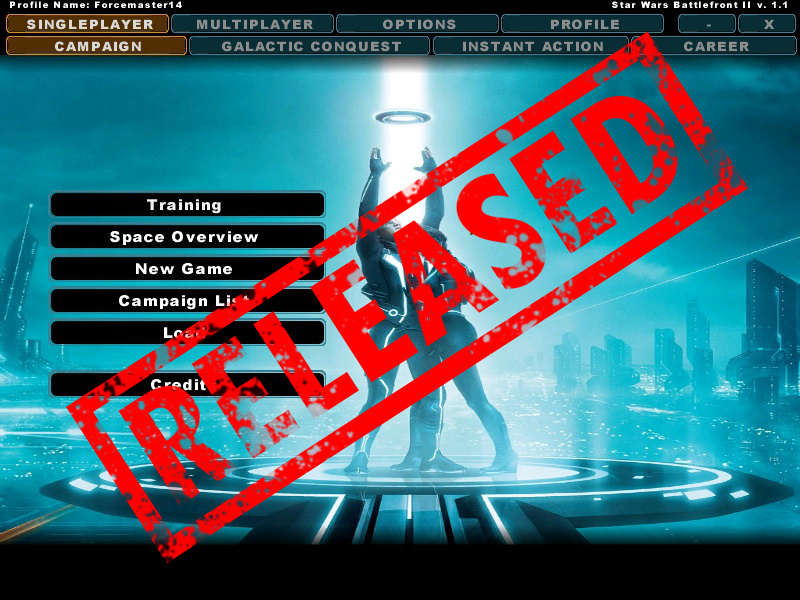 I am pleased to present the new version of my mod, TRON: THE GRID. It has been the fruit of a work of years, of investigation, trial and error but in the end I feel that it is decent enough to present it to the community. I know that there are people waiting for this mod for years and that perhaps they lost hope or faith in my work, but I can assure you that I never forgot what I had started. The long pauses between the advances are because, like everyone else, I have to work to live and not all the time can be to play. Anyway, here we are after a long time.

One of the things that I think is the best of this mod is that I try to create new game modes, weapons, characters and everything necessary to give it the best possible visual appearance and an entertaining experience based on the successful TRON franchise.

It is not a perfect mod, it still has many errors and some are due to the visual load that the engine must handle with such transparency, reflection and lighting maps for the aesthetics of the subject. It probably crashes at some point, it is very possible. I have played each map from start to finish without any problem, but sometimes it crashes in the middle of one. So no problem with that. I know the weaknesses.

I want to thank the MODDB and GAMETOAST community for continuing my work and for supporting me with their faithful comments.

Maybe in a while I will review it again and publish a new improved version. I still have ideas for this mod.

The maps of the TRON LEGACY era are only SIGLEPLAYER
Those of group play are those of the TRON MULTIPLAYER era
If you play multiplayer with the wrong era, the game will crash, because it uses scripts that are not compatible with online gaming.

Campaign: Inspired by TRON UPRISING, try to free civilians and defend the city from the occupation of CLU. I highlight the work I did with the recognizer patrols, if you stay in the range of your search I don't think it will survive. Hard and complex programming to achieve it but the result left me quite satisfied.

Conquest: It is still the same method, get close enough to a command post to capture it. What changes here is that buildings near the controlled command post are affected by the color of the equipment that controls it (BLUE for PROGRAMS and ORANGE for SENTRIES) only in the individual mode. In multiplayer mode the buildings remain the same.

RUN / r: Perhaps this is the strangest game mode created for this old game, but I am very proud that it is functional starting from a shooting game to create something totally different.
I have never played original RUN / r, I have only seen videos, but I wanted to get as close as possible to the emotions that caused me to see the constant change of the path while the character was running, so I wanted to start a new game every time you use What happens will be different, the order of the segments of the track, the appearance of the prizes and the enemies, everything is random but linked together. At the same time I had influences from SUBWAY SURFERS, a game that inspired me to include HOVERBOARD as a game element (not easy to do, I assure you). I hope you enjoy falling through each hole and trying again every time and seek to enter the secret area where you will find much more fun. There is an easter egg.

Objective and Elimination: If you saw the 2010 movie, remember the scene of the battle over the ocean of the simulation, the good guys try to flee to the portal and the bad guys knock them down, that's what it is, play as a passenger of the plane that defends the ship with the turret (as SAM did) or play as a black guard to try to tear it down before they escape, (like RINZLER). In both cases I hope you enjoy it. The tapes of the planes are also an advance in terms of programming for this game but very complex to generate without the game crashing.

Vehicle CTF: When you think of TRON automatically think of MOTORCYCLES, then you will have the opportunity to get on one and try to cross in front of your opponent before he faces you and crashes in a spectacular way. As it is a game, you must have someone who wins or loses, so there is a turn-based CTF system based on regions, enter the region of your team's flag and then go to the point that the game will point to score points (they are 13 and are random, not always the same).

Race: For years I heard about projects of racing game modes but never imagine how difficult it is to turn a shooting game into one where you step on the accelerator. Although the AI ​​of the game is not the best for this, it can still be considered useful in these cases. They may not have your heels on the run but at least they will start with you. This mode was initially intended for multiplayer, but you can have fun touring the places. I advise you to try the first person mode for vehicles, it is another experience.

Survival: Maybe you played TRON 2.0, well, there I saw many characters and weapons that I found interesting to include, also TRON: EVOLUTION was a source of inspiration. Hence the idea of ​​including the INFECTED, they are a local faction but enemies of all and the character they kill makes him one of them ... you can try by eliminating by one of them in the conquest mode and see how the virus infests its character and now it can infest others. Well, the meaning of this game mode is to infest all the enemies until they are all from your team. but it will start alone ... you must make the indicator of the opposing team reach 0.

Wave: Do you like zombies? maybe you sit in a movie of them when you see infested come from everywhere to reach the portal ... they do not come for you ... only that you are in the middle, they want to leave the network ... the portal It is your chance. Here I introduced a turn that seems interesting to me, there are 4 memory modules in the scene, each one controls a type of soldier of his team, if the enemies destroy him they infest him ... then you will not be able to select that unit until you clean the bank of memory with the tool. All characters have tools. So be careful not to destroy it, a unit that you lose is one that plays for them.

CTF 1 & 2 flags: The traditional system but with the weapons and the environment of the mod.

Hunt: this is a hunting competition where if you kill the opponent you lose points, you must kill the prey (intected units)

Hope you enjoy it.

RUN/r Game mode description This is a new game mode for SWBFII, not easy to make but fully functional. Is not my attempt to make a copy of TRON RUN/r...

A quick overview of mod status. Modelling, scripting and news.

The biggest mod stories on ModDB for the week of November 16th 2019.

this is the last version of my mod . I've working for years on it . hope you enjoy it. maybe you will find some bugs onit due the complex of this conversion...

ijust discovered your mod man and i gotta say you are very underrated. It's insane that this mod is even possible for a game that was released in 2005. The amount of work that has been put is honestly amazing and you deserve appreciation. I know it's beem released for a while now so maybe you won't read this comment. but either way , great work man!

Thanks dude. Really appreciate your words.

So just tried the campaign and it says to go to city and find elevator then marker is in middle of the street. After looking for 20 mins decided to come here and ask where is the elevator and what does it looks like?

There was an update that released earlier this year. What changed since then?

Hi! the first released of this mod was some years ago in gametoast...maybe the worst...very buggy, but that was a test for multiplayer mode. I think there changes all, also the gamemodes included in the first version has been improved.I've added new gamemodes and some of thencan be played online without problems.

There are two eras, Tron Legacy and Tron Multiplayer. Try it.

Hey! Thanks to the Autor for this article: rockpapershotgun.com/2019/10/28/modder-superior-best-mods-star-wars-battlefront-2/

Hello! Been waiting for this mod and super excited to play! Just downloaded it and installed. I know it's in because the select screen looks like the Tron screen you gave it but I'm having trouble finding the maps and gamemodes for it. What are they titled under?

Map will shown in light blue.

Weird. I have the patch already installed with a few other mods in the game. Not sure why I don't see the Tron one. I know I put it in the correct spot and the Tron logos are popping up on the screen, just not seeing any of the maps with light blue...

I'll mess around with it some more to see if I can get it to work.