Tidal Wars is an enhancement mod for C&C Generals Zero Hour that will bring you the new genuine naval warfare. Sets in alternate version of the Generals universe, after the event of the original game, the unstopping threat from GLA remnants pushes US Navy to take a daring decision, with the invention from Evans Corporation, the conflict enters a new chapter.

The Chinese taking control the South East Asia. The Japanese are surely not taking this lightly. Within days after the Chinese departed to Philippines, the Japanese Self Defense Force made the decision to unveil one of their top secret projects.

The Chinese decision of taking control of the situation in South East Asia is not only causing an uproar in the said region but also the whole world. The Japanese, being the closest neighbor are surely not taking this lightly. Within days after the PLAN task force departed to the Philippines, the Japanese Self Defense Force made the decision to unveil one of their top secret projects, the "KanKore Project".

This project consist of the resurrection of the sunken ships in form of "Kanmusu" a.k.a. "fleet girls" by fusing the soul of the ship found in the wreckage of the said ship with a suitable female human as body vessel. Many wonders why it must be females. Probably because ships are addressed as "her" so they are more compatible to females? Nobody actually knows why. But nonetheless the result product of this project gives the fleet girls immense power that equals, if not exceeds, to the original ships.

This project was actually started a few decades ago. At that time, the Imperial Japanese Navy encountered mysterious sub-creatures that emerged out of the oceans and started attacking their fleets. Now not only must they fight against the Allied forces, but also against these creatures. When the IJN counterattacked with their full force, their conventional weapons were completely ineffective against these sub-creatures. However after a sub-creature was captured and undergone a thorough dissection and analysis, weapons which were effective against these creatures were able to be developed. However, it was determined that only females can use these special weapons. Those who were found to be compatible were quickly drafted. This was the birth of the first "fleet girls". 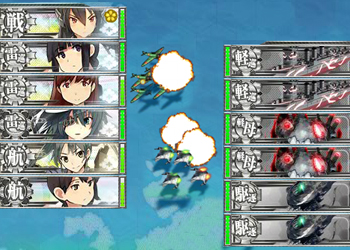 Portrayed picture of battle between fleet girls and sub-creatures

The results were excellent. It forced those sub-creatures, who thought themselves invincible, to extinction. The Japanese rapidly regained their command of the sea, and this project was kept perfectly secret during the World War II. Although the Japanese won the battle against these sub-creatures, they still lost the war against the Allied forces. The number of casualties on the fleet girls keep on adding up. Unable to ignore the losses of the fleet girls any longer, and following the defeat of Japanese by Hiroshima and Nagasaki bombings, the project was forced to stop.

In late 2013, this project was secretly being revived. Following the abandoned prototypes they were able to resurrect several ships such as Fubuki, Shimakaze, Tenryu, and several other IJN ships in form of fleet girls. Although there was no solid proof about their current existence, the rumors were spread through the internet and caused a major influx of Japanese Maritime Self Defense Force recruitment applicants. Until today, the JDSF at last announced the existence of this project. 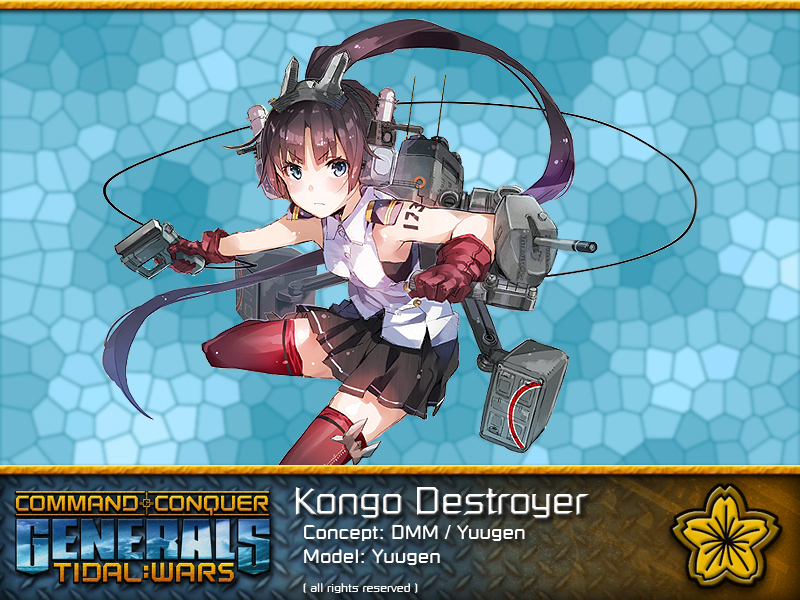 Bearing the same name as their great battleship during Imperial Japanese era, the new Kongo-class destroyer served as the core ship of Japanese Escort Flotillas. With the recent modernization of the Aegis missile equipments in late 2000's, the ship continues in service to protect the Japanese seas as theater missile defense role, with the primary intention of countering North Korean ballistic missiles.

This ship was sunken in 2012 near Hawaii on RIMPAC joint mission while investigating a fallen alien spacecraft. Now she has been revived to aid support to US Navy in the recent Philippines conflict. 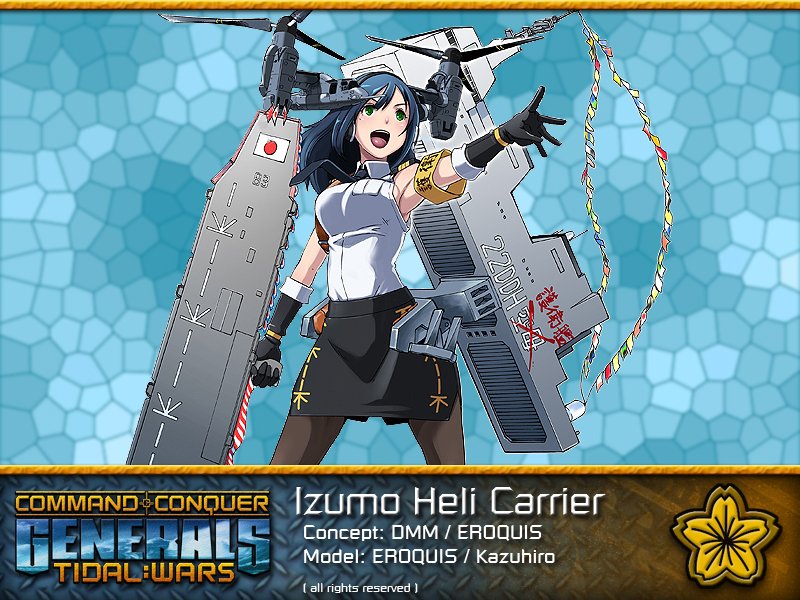 Izumo probably is the largest surface ship the Japanese have since the World War II. Able to house to fourteen V-22 Osprey helicopters, this ship's primary mission is anti-submarine warfare and border-area surveillance missions. Though labelled as a destroyer, it bears a strong resemblance to a conventional aircraft carrier. First ship were built on 2013 and when first unveiled it raised Chinese eyebrows that they called it an aircraft carrier in disguise. Thus the Japanese officials said it will be used in national defense, as cited in the unveiling interview:

Despite being a fairly new ship, one of these ships were sunken by the GLA when they have full control of Hong Kong in the recent Global War on Terrorism event. She were resurrected shortly when USA and Chinese begin to expand their controls in the Pacific Ocean (thanks to Evans SCV technology). And now, against all odds, she was commissioned to guard the East China Sea around the Senkaku islands region. 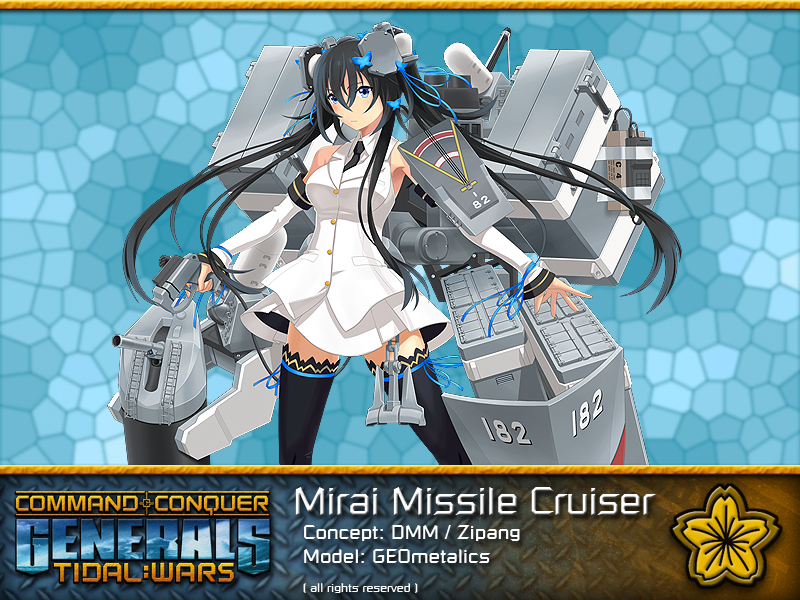 Yukinami-class guided missile destroyer is the newest, most advanced destroyer in the Japan Maritime Self-Defense Force to date. Although it is essentially an improved version of Kongo-class destroyer, it is often mistakenly classified as a cruiser due to its large size that it have an aircraft hangar addition on its back. JDS Mirai is one of these ships.

Mirai, when set sail from Japan on a training exercise with US Navy, encountered a strange meteorological anomaly and lost contact with her sister ships. People believed she were gone forever. But apparently, Mirai was transported back through time to 1942 on the eve of the Battle of Midway. This made the ship's weapons alone enough to change the course of World War II, and equally potent the knowledge of future events on board. While the ship is trying to find way to back to the future, a series of unfortunate events made the ship sink after a stray hit from an American ship, and there was no survivors on board.

With the recent founding of Mirai wreckage in Pacific Ocean, she now has been reborn to protect the motherland once again.

Sorry that we have to postponed the GLA update to give you this really important piece of information about this mod. We have decided that we are adding Japanese Self Defense Force (JSDF) as the 4th playable faction. This was due to our theater shifting to the Pacific region instead of the Middle East, and the Japanese suits this role better rather than Evans Corporation private army.

As you can see above, the JSDF consists of only fleet girls as their water units. This will gives you special feeling when playing JSDF in snowy maps. Aside these ships, they also have other units planned as well, such as the remarkable 501st Witches airforce division and Senshado battle tank forces. More details about them will be revealed in the future. So stay tuned, Generals!

If only this wasn't a joke and somebody made an Arpeggio of the Blue Steel mod, that would be great.

I hope you arent too disappointed :) It took N5 a lot of time, and he even said that he will dont do April Fools joke next year :)

This is absolutly the best joke I found this year...
And also, could it be that you to are into These Kind of things ^^
"Strike Witches" "Kantai Collection" "Girls und Panzer" xD
Sorry had to Name what I thought ^^'

Actually no. Both me and N5 arent much into these things, but N5 said "heck, why not?" and so he did that :)

while not really into these things, I'm still aware of them.
and yeah "why the heck not?"

fun fact: if there was a KanColle mod for generals I'd dust off ye olde disc just for it

So you're a huge fan of kancolle eh n5?

Yep, for a minute; I really felt into that XD
April Fools!

Also, all three ships' lore is a reference of something. 2 are referencing a film, the third is not and is little more difficult. Can you guess? ;)

So when do we get Gensokyo faction?

Oh, I knew it. The best idea of Resident Evil: Afterlife's song was very choice from A Perfect Circle band which track called "Outsider" remixed to Renholder's Apocalypse Remix. KanColle was a very strong ship girl anime since January 9, 2015 until dubbed by FUNimation in June 27, 2017 in honor of it's previous screening of Transformers: The Last Knight.

The song was likey to be proved in A Perfect Circle band that had taken from the album of Resident Evil: Apocalypse soundtrack but KanColle could have that trailer.