What you've heard is true! Tiberian Sun Rising Lives! Reawakened from stealth mode we keep marching on and today we share with you the GDI Firestorm Defense Shield! And Nods Subterranean APC check it out with more exciting updates to come soon!

We do indeed LIVE! Rumors of our defeat have been greatly exaggerated and are merely propaganda spread by the great oppressor. We've been back in development for some time now we apologize for the delay in bringing you up to date with our progress. We have some very exciting developments coming up that we can't wait to share with you and we praise your continued support, loyalty and faith in this project. We make this for you the fans your continued support, input, feedback and even criticisms (keep them constructive please) means everything to us and we thank you. I'd also like to thank my fellow team members both new and old for their hard work and continued support that combined with our amazing fans is what keeps driving us forward!

Its time you saw the future, while you still have human eyes!

We've been monitoring Nod's activity for just over a Year now and the situation appeared to be settling down until recently. But now we're seeing more activity's among the splintered factions of Nod the stage seems set for another power battle among high ranking officers fighting for power within the Brotherhood. We're bringing you back on Active duty Commander we need you to gather more intelligence on the current situation and we'll be briefing you on the latest developments get you up to speed.

Years of research & development have paid off there has been a breakthrough in our defensive technologies and it is now been added to your arsenal Commander approved for testing under battle conditions, we're calling it the "Firestorm Defense Shield". The system is made up of two components the "Firestorm Generator" and the "Firestorm Wall Sections". GDI Commanders are recommended to deploy Firestorm Wall Sections forming a perimeter around the entire base these are reasonably flat
surfaces vehicles & infantry can easily traverse over when inactive. For activation the Firestorm Generator requires a surplus amount of a base's power reserves so additional power plants are recommended to ensure no defense or manufacturing structures are affected. Once activated the Firestorm Generator generates an impenetrable barrier across the Firestorm Wall Sections that will
destroy any aircraft, missiles, projectiles trying to pass through the field
this includes any vehicles or organic matter as well. 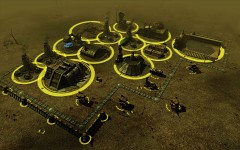 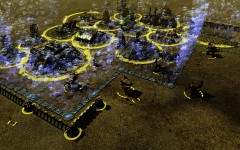 This is a very effective counter-measure against the Brotherhood's Missile strikes when an EVA unit detects an incoming Missile activating the Firestorm Defense Shield will protect the area enclosed by the Firestorm Walls. The system does have its draw backs however the Firestorm Generator can only
stay active for a limited period of time requiring time to cool-down and recharge its priming capacitors. It is important to take note that friendly aircraft also cannot pass through the field and you should be mindful of Nod's subterranean vehicles that could bypass the field by travelling under it and surfacing in your base we recommend keeping Mobile Sensor Array's deployed to detect any subterranean activity in the area. 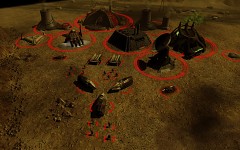 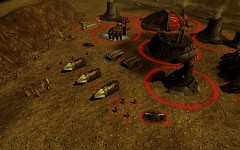 We have new Intel on Nods activity Our satellites managed to capture these image's before Nod forces managed to set up a Stealth Generator in the area. Intelligence from our source within a Brotherhood faction reveal this is a new Armored Personnel Carrier redesigned as a subterranean troop carrier. The vehicle can dig underground and travel vast distances making it much more difficult to track Nod's troop movements or predict where they may emerge. Deploying pavement across your base's should be sufficient to stop these Subterranean APC's from surfacing however this has been untested and we've yet to see if Nod have any surprises for us in this regard our source has been known to withhold information in the past. We'll keep you informed as we gather more information about this discovery as we learn more.

Awesome update, it's great to see this mod staying alive

Before this article i thought its impossible to remake TS on CC3 engine completely...

do subterranean apc's move instantaneous or do they have to travel the distance like in tibsun. (would be really cool if they do)

They can burrow underground and stay there moving around like it would above, only below ground.

transmission received! the commanders are glad too hear this news.

Does this confirm that building is going to be grid based?

Why would you want grid-based building? I like being able to freely place my buildings.

Then again, RA3's building-placement system was pretty good. As long as I can rotate my buildings, I'm good with either grid-based placement or free-placement.

I still think they'd have kept it free-roam placement due to the limitations of the engine. I'd imagine Pavements would work like changing the tile on the ground and access permission of subterranean units. But I'm sure they'll show us in time.

I really do hope free-roam placement stays. It was such a derpy move backwards with a grid-based system all over again.

It's still free-roam placement, which allows for some very creative firestorm configurations :).

How's the FPS when you turn the FS on?

So the Firestorm defense shield will really be able to repel Nod's super weapon -
The Multi Missile?

This update should be enough to keep the impatient trolls away: "oh this mod is dead" etc. The mod lives and it looks awesome.

Oh man, it's great to hear you guys are still around!
Truth be told, I never managed to get a firestorm shield generator working, I was never very good at Tiberium Sun...