Third Age - Total War is a total conversion for 'Medieval II: Total War - Kingdoms Expansion' that brings you into the world of Middle-earth.

If you have installed Medieval II into another folder, please select the folder manually. 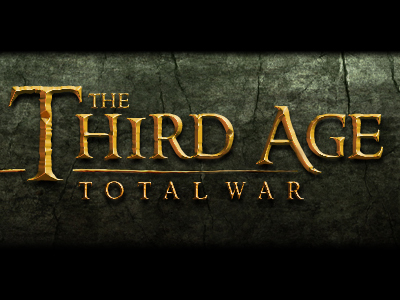 *Oh cool a Balrog, some screens would be nice XD

Sounds good I'll try it out

Nice release. Looking forward to what you can do in 2010!

Absolutely amazing! thankyou so much, this mod and its updates are amazing!

minor problem ive encountered.
Prince Imrahil's display pic in the campagn menu is glitchy, and always comes up as a random display pic, such as a farm, or a random unit etc.
and the wall surrounding minas tirith disapears when u zoom into the max on the campaing map

yea ive noticed that first thing too.. and when hes in a battle he doesnt even show up as a general unit he shows up as swan knights.

sometihng weird has just happended when i downloaded patch 1.4 i can no longer make battles with the battle tool and also on custom matches i cannot do sieges as it just turns of TATW can anyone help me?

very good patch again but can we use now bombs during a siege with isengard? i have seen a video about it.

I just finally acquired kingdoms, not many retailers sell it anymore and so far I've been having some major issues with it, so I've wiped the mod off and installing it again over out-of-the-box version of kingdoms. Let's see if it works

I finally got it to work.
==ATTENTION DEV==
I found abug in the game that causes it to crash about ten turns in. It concerns a Rhun character named Ulfast, his movement in round 9 caused my game to crash, that is till i bribed him, then the turn went through just fine

thanks for the note and especially for reporting what the reason was. :)

I just heard about this problem from another guy and it is indeed Ulfast who is causing this problem...

There will be a little "bug-fixer" today or tomorrow, who will also fix this...

When I download it (1.4) it's only 174 Mb big and says it contains invalid data :o any explenation?

whenever i try to enter or play a battle whether its in campaign or a custom....it says medieval total war 2 kingdoms has encountered an error and needs to close. any way to fix this?

I have same problem as merry+pippin!

this a known bug, which can't be solved unfortunately.

But there is a work-around for this problem, see here:
Twcenter.net

It says how to play custom battles. So I am guessing I can't do sieges in campaign?

Is that true or outdated?

Grassy plain worked fine for me.

How Rohan beat the Harad's elephant's I have no idea >:D

Yes! been waiting for this! Looks like i'm not going out side for a couple days!

I'm kinda new with this mod. In fact, I haven't played the original medieval II at all, but got it to play this mod!

I've noticed a difference in gameplay between patch 1.3 en 1.4

When under siege, you're armies start to decrease. Is this normal? I haven't noticed this in patch 1.3, just the latest one.

In the vanilla version of the game this happens to.

Thx for the reply!

Gz, moddingteam. You are making a great job. You make a super mod, i like it.

I downloaded and installed all of those patches and the game won't work properly. I mean I can actually launch the game itself, but when I am trying to play any of the campaigns the game starts to load and when it should be finished it simply crashes and closes. I can play a custom battle, but the field where i should see my units, command panel etc. is all but white, what should i do?

I am having problems with the game crashing when a faction is taken over. I am not sure if it is a problem with 1.4 or a Sub Mod (real combat). It occured when I was playing Mordor and took over the last Silvan settlement.

What do you mean by not save-game compatible? Does this mean I can't save? or is it that saved games from previous patches won't work? If I can't save I don't want to download it.

will i be able to save my game in this patch??

and also i would like to know if it is possible for you to make helms deep, minass tirith, and isengard like they are in the movie? =) that would be soooo nice :D

I,m thinking there working on it but not for sure and if they are then its going to be a while for custom battle maps, as for save thing I,m not for sure...

ok, i have tried and saving works fine =)

I cant get it to work =(. I bought my kingdom expansion pack through steam could that make it not work?

Go to my profile and look at my blog and make sure you followed ever step here Moddb.com then go here to make sure you have done everthing you need to do for your steam vertion to work Twcenter.net then if you have any problems then leave me a message, Hope this helped....

Glad I could help ;)

will somebody help me, i get all thats needed for the 1.4 patch but it crashes before a battle, but i am able to play 1.0 without, but no other patches, also in 1.0 when i select a settlement my game crashes with an unspecified error

Go here Moddb.com and read my blog and make sure you have installed everything correctly, if not then you will have to reinstall, also if you have any sub-mods installed it might be having a conflick with other sub-mods so the best bet is to uninstall and reinstall by following my instuctions...

hi guys, i played 1.1 fine, and only downloaded 1.2/3/4 today, when i installed all of them, i just went straight to 1.4 and when i click on it it says "medieval total war has encountered an unspecified error".

i play on steam and so re-name the third age total war file as americas in the mods section, wondered whats gone wrong? i've reinstalled all of the patches twice in order, and still the same problem

i've even downloaded the 1.4.1 and its not helped, and now it doesnt even say unspecified error! so annoying!

Look at my Blog here and make sure you installed everything correctly Moddb.com if you have do everything word for word on the install and you are still having problems then try to uninstall everything then reinstall and see if that works, if not, then go here and ask for help Twcenter.net