Who And When
"The Trenches" is a World War I mod for the Half-Life engine. Included in our first release are the British and Germans, two large players of the "Great War". Players will be able to fight for their homelands with six different weapons on many locations on the Western Front with two different kinds of gameplay.

Game Play
Rush over the top with your teammates or stay in your trench to pick off enemy troops in "Trench Capture" gameplay (tt) and cover the advance of your army to in territorial push (tp) play.

Special Features
The Trenches will have some features that will make this an even more unique mod than it already is. Some of these features (for the first release) include:

Multi-Country Team Select
You can choose from 6 countries that were involved in the First World War. Only two will be available in the first release, but we do plan on more.

Well, it is time for some new news on this page, don't you think? With Morphew unable to update the site regularly, I will be filling in a bit to keep you all informed on our situation.

We are currently still working diligently on getting 1.1 released, and we are honestly closer than ever. To hold you all over for a bit, I figured I would make this news release a 2-part facet.

One is the release of tp_city, made by our mapper extraordinaire Hawk. It can be downloaded here or you can browse on over to the Downloads page and get it there as well. Remember, this is a custom map for The Trenches 1.0b.

Now to the other part of the post, 1.1 media. While we have been fairly skimpy with the media on the front page, we have been posting more and more on the forums. I figured I would share a few of those pictures with you as well as one never before seen outside a few select people. Here they are: 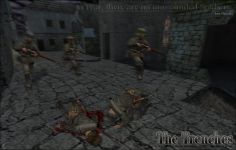 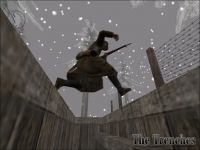 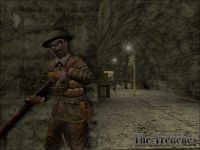 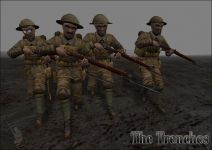 Top-left: Launching a signal flare into the sky.
Top-right: A flare that has gone out, floating down. The Luger is jammed.
Bottom-left: A misguided flare on the ground lighting the immediate area.
Bottom-right: Carrying the Bergmann MG-15nA LMG.

Remember! The shots of 1.1 should be considered as work-in-progress. The content shown within is subject to change before release.

So you are still waiting for The Trenches 1.1. We are also. But I want to clear things up a bit. Some people spread the word that the release will be...

Dear community and visitors! Today I write to break the silence which overwhelmed the homepage for a long period of time. I don't want to babble around...

Not many people can sit back and bask in the warm glow of a modification they released, not to mention one which has received as much praise as The Trenches...

News from the soggy front

After the map picture update we had now some ingame action. In the following pics you can see our new TT 1.1 Playermodels in action. The map seen on the...

Full version co-op\single player game. Start off with a machete and dual pistols, in this thriller trench game based in WW2. The object is to defeat the...

Last released beta for The Trenches. Expect lots of bugs.

The Trenches Beta 1.0b Linux Patch

The latest patch for The Trenches World War I Half-Life modification. Requires the full 1.0 Beta to work.

The Trenches is a Half-Life mod that takes place in the World War I time period.

The latest patch for The Trenches World War I Half-Life modification. Requires the full 1.0 Beta to work.

The Trenches places you in the shoes of a soldier from the British Commonwealth or the German Empire. The game takes place during the later half of the...

I really wish there was a linux verion of this. that would be so poggers. like an actual linux verison.

wtf? this totally ruined other mods i cant go into singleplayer mods well i can but they crash at a loading screen all i did was put the file into half life 1 folder and it makes every other game into multiplayer so every single player game is ruined who ever made this PLEASEEEEEEEEEEEEEEEEE Respond

what the hell happened? i downloaded the mod and its like a virus most other mods are unplayable because it forces you to play them in multiplayer and thats not possible in most of my mods and best case scenario its just the music which bursts my ear drums

The Trenches is an option up for voting on mod of the week right now!

Please someone make bots for this mod

I got to play this game back in it's hey day I guess you could call it. It was not very populated even back then, but it was fun. Felt like the Battlegrounds in a sense, but still held to it's own merits. Had this game been fully realized we could of had true trench warfare with whole squads rushing over the open field as a wall of bullets were fired to stop them. Or mortar rounds, gas attacks, tanks even could of been included in some form or fashion. What a shame it was not meant to be. Anyone still play this game though?

I've also made an exe file to act as a standalone so u can play the game without having to move files
Here's the link: Mediafire.com
the server is added in this "standalone"

Multiplayer
Tags
Embed Buttons
Link to The Trenches by selecting a button and using the embed code provided more...