Ladies and Gentlemen, i have the pleasure to present: 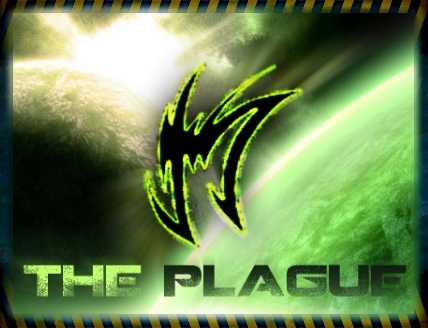 The Plague History:
Everything we are, is the result of a long and incredible proccess called Evolultion, strange and beatiful, defined by "any change across successive generations in the heritable characteristics of biological populations. Evolutionary processes give rise to diversity at every level of biological organisation, including species, individual organisms and molecules such as DNA and proteins".
And thanks to that diversity, the evolution let to the most intelligent lifeforms grew up, explore, advance and colonize the inmensity of the universe, filling it with the beauty of the life with his smart creativity.
But what happens when evolution takes another way? What happens when it leaves the way of the intelligence? What happens when it choses to exploit other capabilities of the life? What happens when it choses instinct, and it triumphs over intelligence and let it keep advancing without limits?
The Plague happens.

That is what happened in the star system CA-0218-NM-5, also knowed as CANMUS-5, an island full of extremely active life, far enough of those intelligent lifeforms to grew up without even let them notice its existense. Far enough... to dont let to The Plague escape from its lonely prison.

After entire eras of continuous evolution, The Plague managed to travel throught the space, and invaded almost every planet of CANMUS-5. After that, when it consumed every resource of the now corroded worlds, and there was nothing more to invade, to fight or to eat... The Plague started a "long campaign against the food crisis", and a long hibernation cycle. For several standard decades, seemed that this was the final fate of the plague, total extintion.

--A poor Nomad cruiser that tried to escape from a battle recieved the impact of a Rift Generator, the FTL device was activated at the same time that the ship recieved the powerful energy shockwave that exited from the momentaneous rift, overcharging it and making to the heavily damaged cruiser jump right inside the closing dimensional rift. All of that, happened in a extremely short time, less than some hundredths of a standard seconds. But was enough to accelerate the ship at such speed, that it was escaping from any kind of understanding... the immeasurable speed make possible to the ship pass throught the momentaneous wormhole generated by the now corrupted dimensional rift... and just one or two seconds after, the nomadic cruiser exited from it.

No one in the crew was able to even wonder what happened, the only thing that they knew, is that they exited to a non-known area of the universe, and that they were traveling at a FTL-like speed in normal space... in some seconds they entered to a strange star system, and managed to avoid a catastrophic collision with an asteroid that passed so fast, that when it appeared in the long range lidar, it was already passing at their side.
After around 3 standard minutes, the engineers of the ship managed to reduce the speed enough to begin able to land in the planet that was in their way...

The landing was catastrophic, the already heavy damaged ship broke in two parts before even touching the land... the smaller one exploded seconds after finished the landing... creating a HUGE fireball, caused by the cargo bay that was prepared for a long battle...
Less than half of the crew suvirved... but what they were going to face now made them wish that they had crashed with that asteroid some minutes ago... --

The now awoke and frenetic Plague started to try to assimilate those strange devices, trying to understand for what and how it fell off from the stars.

Some decades later, a Rebel Battle Fleet encountered a strange swarm of spatial beasts that was exiting from FTL, they had no time to even retreat, the entity was not letting them escape... They were only able to send a SOS transmission with the only transmission that the entity emmited before eating the fleet... a strange patron of sounds that lately, and thanks to the best of the best in "Unknown lenguage decoding and traslation group" of the Rebels, was traslated revealing the objetive of that strange entity:

The Plague Backstory:
As i said many times, i'm wanting to make the second Modding Contest, but this time you will have to build a specie, a race of organical spaceships with insectoid/beast shape. After that everything will run as with Praetorian Industries, but this time i'm wanting to make a race of the size of a DLC, i mean, no more of 15 hulls, but with an extra of around of 40 new modules. All of this focused to create a race with a REALLY different look, a very different way to play, and therefore, a new gaming experience for the players of Gratuitous Space Battles.
I've already prepared a lot of ideas for new devices for this new "universal threath", and just today (03-01-2012) i've coded the first module.
Praetorian Industries v1.1 will be released in some time, as fast as i write a "guide" and fix any bug or OP issue. I mean, PI is not going to be affected or delayed by this new project. And this project is meant to be completed in no more of 3 months.
Update: Slowly slowly catchey monkey the progress of the mod advanced a lot, 5 months have passed since the start of the project (very delayed due university) but now The Plague idea is taking shape and more and more closer to the final release.
Update 2: Several months of Zero modding activity just ended, i finally found some free time to deal with The Plague mod, i expect to launch the mod in less than 2 months ^^

> Gratuitous Modding Pack
If you want to make your own mod, here you have a great source of visual and sound stuff, it was used to make this mod:
Positech.co.uk

> The Ghosts Mod
The invisible hand of the Ghosts is claiming for vengeance... Stills as WIP.
Positech.co.uk

The Plague is now avaliable for download! Enjoy playing with the hordes of deadly insectoids that this mod offers

mine says its missing a sounmd files.

Hmmm, thats a common problem when you click "no" to "overwritte files?" window, this MIGHT be your solution:

That should fix it. If not, tell me.

Very strange, as far i know some people tested it without problems. Do you own all DLC's (except campaing) and the last version of GSB?

Also, if the mod is crashing the game, a little error message should pop up, if so, what it says?

This mod based on Frank Herbert's epic Dune saga, features a struggle to control one planet - Dune, Arrakis, a barren desert wasteland which is valuable...

This is a Stargate mod for the (best) turn based strategy game (Civ3C) of the world. In the mod you can play in the milkyway galaxy with the nations based...

A long time ago in a galaxy far, far away.... The story occures some years after the Endor Battle, after the destruction of the second Death Star and...