Work in progress! READ INSTALLATION CAREFULLY OR FACE ETERNAL DAMNATION!
Remember This is a work in progress, there will be bugs!

This is a total conversion that adds all the game of thrones factions, including The White Walkers and other fantasy creatures such as giants. The focus of this mod will be on the fantasy part.
It adds tons of new troops created from scratch, factions such as The North, Southern Kingdom (Lannisters etc) Dothraki, Unsullied, The Vale, Dorne, The Night;s Watch etc etc.
Characters from the show are added, with the correct familes and clans in their faction as well as fiefs from the show.


The White Walkers have come all hope is lost unless someone can unite the kingdoms to fight against them. And even then it might not be enough.

This mod replaces most in game factions with game of throne factions as well as adding white walkers.
It takes place sometime between when Ned Stark was executed and the North starting fighting with the Lannisters.

The White Walkers are not an easy foe. Wights are tough, very fast runners and hard to escape from, but killable with the right skills. Then there are the Famed White Walkers, almost invincible, normal weapons will barely hurt them, perhaps youll be lucky to find some of the mythical Dragonglass on your travels or even better.....Valyrian steel.

Do not expect a walk in the park, this enemy has purposely been made extremely difficult to defeat and the mod is still a work in progress.
My main focus is on the White Walkers, I MIGHT add other game of thrones factions but right now I am working on the important enemy I want in the game.


Although the main purpose of this mod is to add White Walkers as a foe, I have also included the option to play as them with an alternate start although they are very OP and that’s just for a bit of fun if you feel like becoming a super OP character.

DragonGlass
Very powerful but brittle, it will break after a few hits and is automatically repaired after the battle, use it wisely, acts a throwing dagger or spear with very short range, youll need to get close to them and aim for the head, will kill most White Walkers in a single hit or two if you hit the armour first.
Current list of dragonglass weapons:
Dragonglass Spear
Dragonglass Dagger
Dragonglass Arrows.

Ice Weapons
Only White Walkers use these and the only way to obtain them is to use the alternate start detailed below in installation, very deadly and OP.
I don’t like the appearance of these weapons right now, once it’s possible to import models into the game when the mod tools are released these weapons will then receive a Visual Overhaul.
Until then, the models Ive found in the game files will act as a placeholder.

Night's Watch
The Night's Watch cant be recruited (they remain neutral to ALL except a permanent war with the White Walkers. You can still recruit them if they are taken prisoner by enemies, they are armed to the teeth with dragonglass and valerian steel, having them will sway any fight against the White Walkers in your favour, but their numbers are low.

- Adds new Wight units, as well as the factions from the show. Split into The North, The South, White Walkers, Baratheon, Dorne, Targaryen (dothraki and unsullied), The Night's Watch and The Vale.


- Adds and changes all Sturgian heroes to white walkers, even the females and their leader is now the Night King, also buffs them and their weapons, you can defeat them without special weapons but its very hard, overwhelming them might be the only option or a powerful throwing weapon, Dragonglass and Valyrian Steel should kill them in one or two hits if hit in the head, it has special damage modifiers to do more damage than the stats show.
White Walkers are also armed with throwing spears as well as close combat weapons, they are highly powerful ice spears. But apart from that they have very few if any ranged weapons, use this to your advantage.

- Giants added, both living and undead. Undead are slightly tougher.
Giants are very slow, very hard to kill and do massive damage, they are also very expensive to recruit and feed but are worth the investment most of the time, just dont let them get surrounded as they can be overwhelmed, they are basically the tanks of designed to soak up damage but using tactics you can run circles around them and shoot them if you get the chance.
Giants will also appear in villages located in the North only, and the character creation screen is bugged as the only way to add the giants i could find was replace some of the children models with a larger size, so this also shows up in the character creation screen.

-New skins and hair and eyes, become a White Walker in character creation and slaughter any men that cross your path, however it will be fairly easy as the Wights and White Walkers are pretty OP.

- Custom start for playing as a White Walker, to use it, start a new game, Select "The White Walkers" then continue until you reach the screen where you choose your starting gear, then select skirmisher to see that you will now start with the White Walker weapons and armor.


- Troop trees changed and overhauled, The North have giants as their special rare unit and Southern Kingdoms have King's Guard.


-A few things are placeholders until models can be imported, until then I have used assets that fit the best.

Installation
Mod works with version 1.4.2, I would recommend a new game when first starting this mod due to the large amount of changes it will probably cause you problems and crashes if you don’t start a new game.
1. Move Modules folder to your Bannerlord folder, when asked to overwrite, select YES, the files that are replaced contain backups in the same folder for unInstallation.
2. Install a launcher that allows for you to change the load order, if you dont, it will crash.
3. Use only the following load order, nothing else will work:

"The Long Night - Custom start " is OPTIONAL, this is because it will conflict with any other mods that are custome starts, if you already have a custom start you like to use, just ignore this file as you dont need it to play. 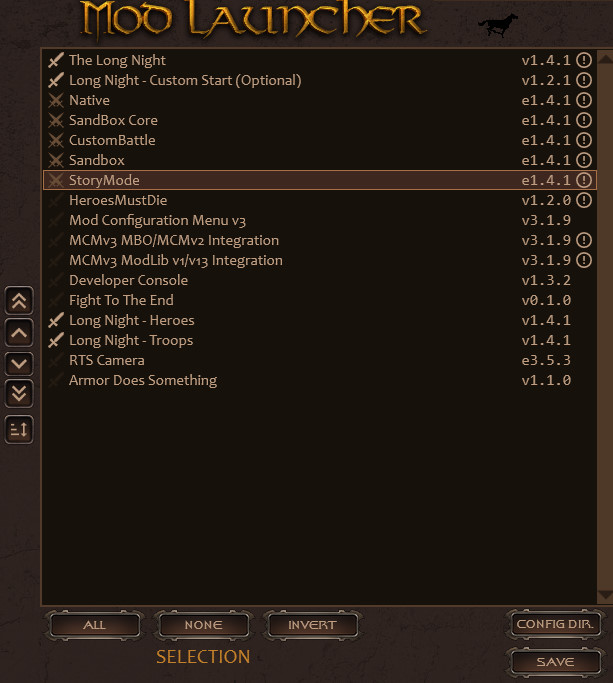 
IF INSTALLING WITH VORTEX!
I couldnt get vortex to work with any mods for me so I used this launcher:
Nexusmods.com
This is what I recommend to install and change the load order with

Magic is currently in the works and will follow the rules of the show, not too flashy but helpful when needed.

Some Banners are placeholders and will be edited at a later time, the same goes for some characters, their faces will be modified to resemble closer to the TV Show at a later date.


Until the tools for editing the game are released, I have to do everything manually so importing new models is very hard if not impossible.

Visual overhaul of many of the mods features, including ice weapons.

Rotting wight skins when I can replace textures.

More white walker creatures such as undead horses and ice spiders and maybe even dragons, again, when models can be imported and a model importer is build by someone.


The Night King will be overhauled when I can get a model imported for his spiky head, right now he is bald.


Known Issues and bugs
1. Custom game does not work with this mod, it will crash, it is for Campaign only.
2. Smithing for Valyrian steel is bugged, so dont use it at the moment, its not working when selecting the items and may crash and some dont fit correctly yet, I will fix this in the future.
3. Character creation screen will be bugged once you reach your child years and will appear as a giant.
4. Currently Daenerys Targaryen age has been increased to stop you from marrying her, if you do it crashes the game sometimes due to taking over her faction, ill try and fix this if possible so currently her age reads in the 40s to prevent you marrying her.

Credits
BenjiG91 for helping out at the start.
begginfokillz I used the data in the heirloom mod as a basis for learning some things and used small parts of their code as a starting point for my own alternate start (which mod permissions state I can use assets from that mod as long as I credit it)

To promote The Long Night - Bannerlord - Game of Thrones and grow its popularity (top mods), use the embed code provided on your homepage, blog, forums and elsewhere you desire. Or try our widget.

Quick hotfix for 2 major issues, Thenns should no longer appear as giants and some settlements have been fixed that were causing issues with recruiting...

A game of thrones mod focussing on the White Walkers and magic and other fantasy elements by replacing all in game factions. Mod works with version 1.4.2...

A game of thrones mod focussing on the White Walkers and other fantasy elements by replacing Sturigia, they are a very tough enemy added to the game...

A Feast For Crows

A Feast For Crows is a modification for Mount and Blade: bannerlord, based on the TV Show Game of Thrones and The Books by GRRM.

The world of Game of Thrones will be coming to Bannerlord, Join the ranks of one of the many Lords or Kings in The world of Westeros, become and outlaw...

Jötnar of Sturgia adds a new race of troops to the Sturgian Principality, the troop tree consists of a total of 15 troops spread across tiers 2-6, as...

Silmarillion is a total conversion modification for the game, Mount&Blade II: Bannerlord. It is going to be based on the famous books of J.R.R Tolkien...

Separatist Crisis is a Singleplayer total conversion of Mount & Blade II Bannerlord, that brings the Galaxy of Star Wars during the Clone Wars Era into...

Kingdom Under Fire: Bersia at War

A total conversion that is bringing the Kingdom Under Fire universe to Mount & Blade II: Bannerlord.