What if GDI and Nod failed to defeat CABAL during the Firestorm Crisis? With both organizations destroyed by CABAL, nothing was stopping the rogue AI from conquering the world, replacing humanity with cybernetics. The Forgotten, out of the way for much of the Firestorm Crisis, now find themselves being hunted down, conflicted between fortifying their sanctuaries and actively waging a guerrilla war for their own survival. The years of unchecked Tiberium growth would also eventually attract the Scrin, expecting Earth to be devoid of hostile life. Their ignorance would only end up thrusting them into the war between CABAL and the Forgotten mutants, a dangerous situation due to their unpreparedness but their desire for the Tiberium Ichor drives them to destroy anything that stands in their way. A new Tiberium War is about to begin between CABAL, the Forgotten, and the Scrin. Conquest, survival, addiction. For whom will you fight for? 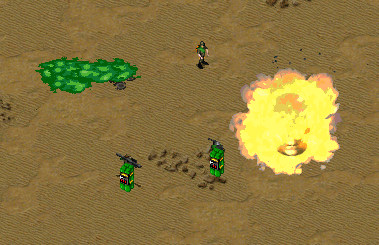 The Mad Bomber is a much needed rework of the then named Sapper, who is basically this mod's version of the Crazy Ivan.

As the Sapper, it pretty much did the usual Ivan things on top of being able to earn experience points, which is where the problem came in. At Elite rank it benefited from cloaking just like Marauders and Hellfires/Spirits and it's special ability is to C4 structures. Thus you got a unit that could demolish entire bases with nearly no risk of retaliation. This has since been changed.

It no longer gains experience and instead of a C4 ability it now has a sabotage ability. It will infiltrate structures of foundation size 3x3 or larger like a spy and completely destroys them at it's own expanse. Otherwise it will use timed charges on smaller structures. These time charges are also enhanced with Tiberium, dealing 25% more damage than standard time charges and will release Tiberium gasses on detonation.