Gera, a city in the US has been abandoned for five years due to an attack of biological terrorism. The attack was done with a bioweapon developed by engineers commissioned by government. Terrorists sabatoged the weapon, causing a meltdown and destroying most of Gera's population. The city has been quarantined until now. Gera is currently occupied by a small cell of the terrorists responsible. They have been conducting psychokinetic experimenting on humans- creating a clone army and mutating the human genome. The military has been tasked with infiltrating one of these research facilities. Your squad will be dropped on the roof of the research labs in the city hall. It won't be easy- good luck, soldier! 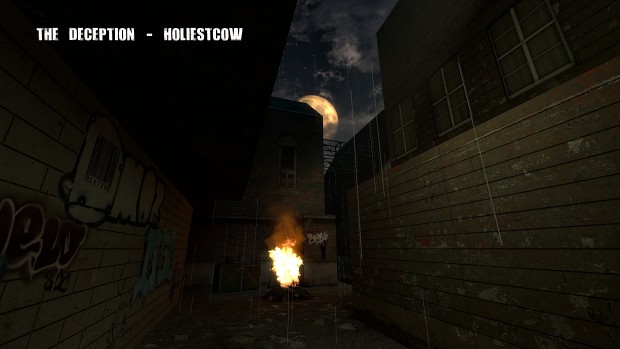 Much better from Sasha

This looks really better than the other, with the boxes and so on it looks filled up and feels better. Ah and I love rain :3

Id add an orange glow from the fire, and will we see some fresh graffitti decals? These are used in so many HL2 mods (and HL2) that they get old quick. That nitpicking aside, its pretty good :)

The orange glow has already been added. Some custom graffiti will definitely be added, its just not on the priority list yet.

I love the skybox with the moon, a beautiful new texture! :D

Rework from before - Been busy finishing the Infiltration chapter but i decided i should take that old crappy picture down.