We're happy to officially announce the next addition to Stargate Empire at War: Pegasus Chronicles today!

We're happy to officially announce the next addition to Stargate Empire at War: Pegasus Chronicles today! 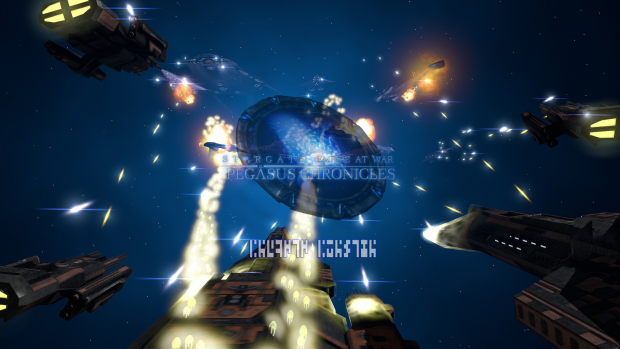 Many of you have hoped for a chance to take part in the long lost and forgotten war between Ancients and Wraith that took place many years before the Tau'ri first visited the Pegasus galaxy. For quite a while we have been working on a story-driven space-only galactic conquest that takes place during this ancient war named "Pegasus Prelude" to offer you a chance to shape the past due to your willing.

This first galactic conquest for Pegasus Chronicles can be played both as Ancients and Wraith to relive the rise of the Ancients, their war against the Wraith and finally their demise.

At the moment the entire team is working hard together with the beta testers on ironing out the last remaining issues with this galactic conquest. If everything goes well we will have a release before October! Enjoy the teaser trailer once more to shorten the time.

Also as of today our Youtube partners will also start releasing their first impressions on this new addition to our project. Stay tuned!

Very exited! Shall we expect ground combat of any kind or is it space combat only ?

We have said multiple times that it will be a space-only GC. It's even stated in this very article:
"we have been working on a story-driven space-only galactic conquest" :p

So no ground combat yet, sorry :( But we're on it and it's making good progress!

It is space-only for a simple reason: Ground part would need more time to be done than we already invested for this GC. Consider the Ancients need then a full set of ground buildings (approximate 5 to 10 buildings) plus some infantry types and maybe vehicles. Not to mentioned all the ground maps for every planet. We currently working on the ground part for Tau'ri, Wraith and goa'uld to get the main factions ready besides of this and other GC's. We have unfortunately not the men power to manage that too. Maybe sometimes in the future when the main factions and non-playable factions are completely done, we will give the Ancients ground stuff too and upgrade this GC, but not yet.

This is going to be fantastic! Are we going to be able to play ancients VS wraith in a campaign for multiplayer? Or will this GC be single player only?

It is just single player. But we preparing a surprise for the multiplayer fans after this release. ;)

Hey guys,
This looks awesome, can't wait. I appreciate the hard work that goes into this.

I do have one request, can you make this version/update Ultra-Wide Screen compatible? I've tinkered with the settings for awhile and cant make it look right.

Hey Mapper,
I've been there numerous times, and based on what I've gathered from there and other sources, it may be possible; however, no one has tinkered with it enough yet to say it can or can't be done (compared to eyeinfinity).

Based on my tinkering, it might be possible. Only thought comes to mind is make the game look crunched in 16:9 and adjust the monitor to stretch it making it look normal in 21:9 ultrawide. I am busy for the next few months so I cant try and see if that works.

Let us know if you happen to find anything.
I don't have a widescreen or UHD monitor so I can't perform any real tests regarding that matter.

The shield hit effects in EAW are determined by the color of the projectile hitting it( Which is actually more "real") There is no way to change that.

I was just watching one of beta testers on YouTube for the GC and I have to say it looks like the best GC I have seen in years! The only thing that I noticed is that when the drones are fired from the corvettes they look too big, for some reason they look bigger than the ones from the bigger ships. I would say the size should be cut in half. I don't mean to be picky, I just did not know if that was the way it was supposed to be or if it was a bug. Otherwise the closest to perfect mod for SWEA I have ever seen. Great Work!

Thank you Thore95,
We will have a look at the drone size.

great game! i love it! a few questions, how long do you have until missions expire/fail? also when wraith attack "taranis" despite winning the battle with zero or very minimal losses- the planet loses the Tech 5 Space station. this is after the "protect taranis until 'destroyer ship' research complete" mission. also after i won the space battle attack on taranis and my tech 5 space station disappeared i built it up to tech 5 again, next time they attacked i had a tau'ri (earth) space station instead of a lantean (ancient's)... i won that battle with no losses and that space station disappeared so i had to rebuild it a third time lol. my stations never got attacked and never lost their shields