Stargate Empire at War is a total conversion for the Petroglyph game Star Wars - Empire at War. It changes nearly everything, units, buildings, sounds, maps and all the other stuff. You need Empire at War with Patch 1.05 to play it. For more information read the readme, which you will find in the archive. Have fun!!!

Posted by MerlinGalgotta on Dec 1st, 2008

Yes, finally it's here! We have just released the Stargate - Empire at War Final 1.0!
First of all, please read the readme which you will find in the archive, before you ask questions and post bugs. It contains a lot of information about the installer and known bugs. Thank you! 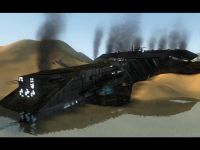 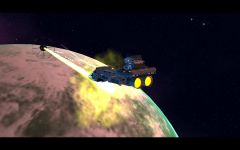 Most of you will already know it, but here is a description of this mod:
Stargate - Empire at War is a total conversion for the Petroglyph game Star Wars - Empire at War. It changes nearly everything like units, buildings, sounds, maps and all the other stuff.

You can play as Tauri or Goauld, but you will also find all other known factions like Wraith, Asurans, SystemLord Alliance, Lucian Alliance, Ori, Replicators and so on and so forth.

We have also added new galactic conquest maps with events, so you can play through the timeline of Stargate. Furthermore we have added a complete new game mode, called the "BBS" mode, which means "Build-Base-Strategy". More information about it can be found in the readme! 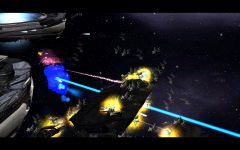 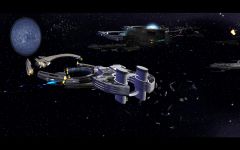 Some words about the english version:
the text file is not up to date so there might be a lot of [missings] and German text, but we will release the complete one with the hotfix, which should be released in a week.

Last but not least, we are sorry that there is only one download source at the moment, but because of private issues we haven't had the time yet to upload it to several servers. While the next two days, many more sources will follow, i will edit this news!

One request:
For the purpose of overview please post bugs and suggestions in the forum of our website
www.stargate-modding.com
Thank you!

Simply replace the files in your stargate mod folder.
It fixes the tech bug, now you can tech in Area 51!

Yay! (smiley face that contains an underscore, which is not permitted)

Hoo-ray!... The only problem now is that i have downloaded it but it wont install...

i have the same problem

Read the Read me, you now, the file that says READ ME!!, its a notepad file. Maybe me and spino are the only ones that read it.

not only you and spino..

No I read the "read me" files all of the time the trouble for me is acually downloading it I am having a bit of trouble.

oooh ya, hay Jhon if you havn't already did you down load the empire at war 1.05 patch? cause it won't work if you didn't. Hope this helps.

I have read the read me, i have the 1.05 patch...
whne i double click on the downloader it wont start instead it just freezes the screen...

You sure it might be your graphics card or did you wait?

ok i need help the game crashes when it loads up it makes it to the main menu then BAM blue screen of death. I have no idea whats wrong I can play EAW fine with no problems and the old 0.8 version of the mod works fine anyone have any ideas whats wrong?

I am having alittle trouble also, got it downloaded but after I hit to install it. It asked would I like to install it, I hit yes the setup screen with the crashed ship comes up off to the side of the screen and that is it been ten min. and nothing.??? help please Mark

I had a similer problem but i found out that the screen resolution was a bit off and the button were off the screen hope this helps.

Thanks I will see agian I was going to giveup for the night.

yep that done it for me aswell thanks mate

its working. that was it thank you

Well I spoke to soon got it installed but to get a short cut to get it to run that is another story. its 4am tired of trying, please if anyone else can help will try agian in the morning. want to play this but 8 hours of download and trying to get it to work alittle tired.

Does the shortcut link to stargate.bat or are you trying to use the SW:EAW default shortcut?

I may going to try uninstalling sw:EAW and reinstall it would not even let me lunch the star wars part of the game will try that. what shortcut should I use? and how did you set it up?
Thank you for all your help.
Mark

Ok I got it to work reinstalling and useing the mod luncher and it works great. You guys have done a great job. thank you for all the time you put it to this for us.

My graphics card is up to date... it still freezes...

hi
i have a problem, when i play the large GQ(dont remember the name) the game lags all the time. Has this any reason or has it to do with the large numbers of planets? I have the german version.
Thx

yeah it does that no matter what system you have... it's got to do with the amount of planets

so how do u install if you dont have winzip

how can you not have winzip???
it comes with pretty much every Operating system (except most linux OS')

Download the free trial, just do a google search for winzip

YAY, I finally got it to work.

Other than some crashes which are to be expected... i got the english version... but everything is in german...

I noticed one of the songs is from Last of the Mohiqans(sp)?? The last battle song or w/e it was called... and I was like.. what!? Am I listening to stargate music or a movie soundtrack? lol

Hi!
First off all, this is a very good mod. Congratulate to the team!

I read the Read Me but I don't fing anything about this.
After I install the mod(english version) everything in the game is in german: the main menu, icons etc. Only some of the texts are in english: a few unit descreption, texts of events etc.

How can I change the language to english?

when i try to install it gives me an error messege and wont install please help !!!

have anyone been able to defeat the kullwariors at GC? nothing dameges them...? i thought there would be an special unit of upgrade at the Betasite but i didn't find it:/

Use anti vehicle turrets, they seem to be the only thing that can kill them

very nice but bug bug bugged !
first, Language ? all is German whereas i have downloaded english version.
2- a lot of "MISSING"
3- Many crash (3 in 10mn) !

and i add something: Music===> why is not stargate ? main menu music==>Black hawk down "leave man no behind" nice but its not stargate.

the best modification of the yeahr!
congratulation to the stargate modding team

my respect for this good job guys:)

the best way to kill Kull warriors is with carter and some anti kull guys.... their icon is normal sg troop except with little bullseye in corner (not sure if thats right but i know that there's anti-kull teams)

The English version has no English in it from what I can tell...great mod but annoying that I cant read anything, plz plz correct this

It isn't so bad. It's actually educational. Learn German and play a cool mod at the same time.

im all for "educational" but i would like English.
Also i tried GC and is their 2 buildings of each and i dont know what half do. but only played for a few hours so maybe i'll learn

have problem starting Stargate; have installed EaW with patch 1.05, down loaded and installed Mod, all with sucess, but when trying to start Stargate through the file stargate.bat nothing happens. anyone have any ideas?

Hi I downloaded the hotfix where exactly do i extract it to? I've tried a few things but nothing seems to work