From the makers of Thrawn's Revenge: Imperial Civil War, Ascendancy is a Star Wars mod set after the Battle of Endor in the Star Wars Galaxy. Fight for galactic ascendancy as multiple factions from this period in Star Wars history. 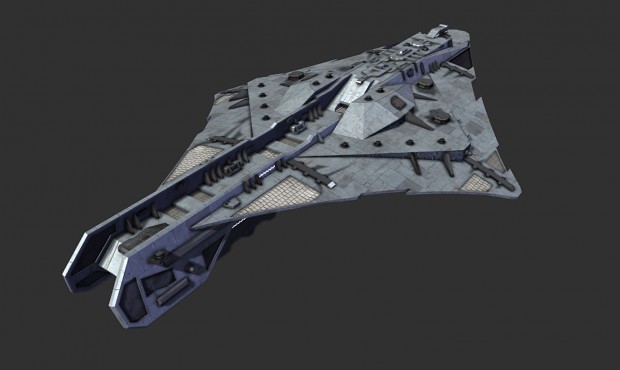 I kinda like this, but I hope not too many others get changed too drastically, as I rather like the way the EoTH looks now personally. (In terms of design)

Love it! Super ecited to see the rest of the overhaul!

"Hello. My name is Intego Battlecruiser. You killed my mothership. Prepare to die."

I always did feel that the Intego was just too blocky and lacking in elegance compared to how many of the EotH ships looked, especially compared to the fighters. I do like this one.

This one really does look like a high tech bunker of a ship with all of those straight edges and the thick looking layers. Amazing work.

Btw is that a hanger near the middle of the ship on top, along its central axis?

I like the design. It reminds me of one of those random alien ships the Enterprise would encounter in TNG. Well played, guys. Let's hope it rips through hull armor like butter.

I really hope to see more Ascendancy progress its one of my favourite mods in Sins, looking forward to the Hapans and the Eoth remake.

Nice looks very Halo like to be honest, getting some serious Covenant vibes

The Intego's path into Thrawn's Revenge has been a long one. It was originally designed several years ago with a very different model and released to ascendancy, but we never felt the model held up in Thrawn's Revenge. As we're restarting the Empire of the Hand's design process, the Intego made a good first target for that. The rest of the roster (except the Peltast) will be getting a similar makeover.