Welcome to this year’s first dev diary for Star Trek: Evolution! The year is new, but the goal is the same: To finish Evolution in this life! \o/

I managed to make some good work on War – Aftermath (WA from now on). I’m nearing completion of the starship models. I have only one more Klingon ship to make, a couple of Romulans to port and a handful of Federation vessels. I also started working on balancing and on the techtree. That’s the phase when I’m going to figure out what kind of new station models I may need.

WA will not only be an expansion of the timeline you can play through, but also another update of Federation Dawn. I can already tell you for sure that the techtrees will be revised. For example, some ships will be buildable for a shorter period of time, and then they will get only upgrades later.

I also started to work on the concept of huge space stations, like the Spacedock. I want to make these immense constructions to be unique, difficult and costly to construct, but once they are built, they will be extremely difficult to destroy and they will provide some kind of special benefit. I have many ideas floating in my head but I have to make a system that works well in an RTS environment and would be enjoyable and useful at the same time. So those who were asking for stations that are difficult to destroy, be prepared because your wish will be fulfilled.

Recently I was working on a new feature that will arrive with WA: Tiny ships. You may be confused, because there are already small ships, but while these are scouts of which you use one or two only. Tiny ships will have a much higher impact on the gameplay. Now, look at the image bellow. Those ships are right in each other's face. That's how small these ships will be. 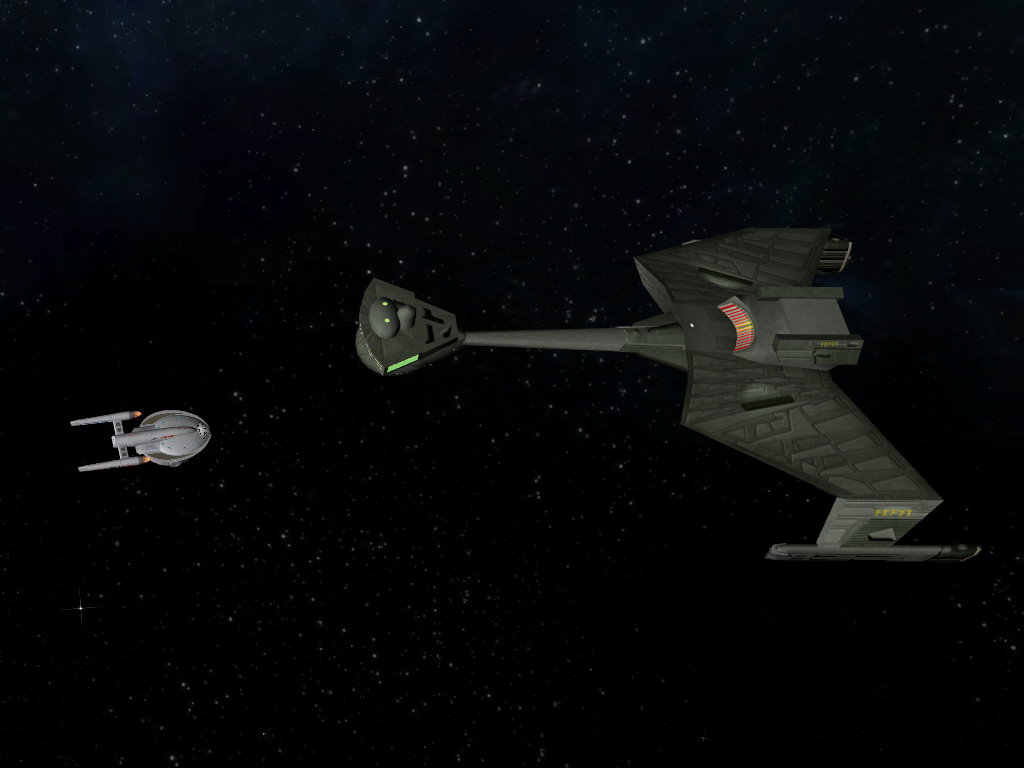 Tinyships were introduced in the second half of the General War, were used in great numbers during the conflict, but mostly retired soon after the ceasefire agreement was signed. Usually without a replacement class, as their roles were taken over by other ships or fighter squadrons. Tiny ships are barely bigger than a runabout (they will be implemented as squadrons), but just big enough to be classified as starships. They are usually 40-60 meters in length, never longer than 100 meters. They are manned by no more than 30 people, and they either carry weapons heavy to their size, or have other means to quickly get out of harm’s way. Unlike runabouts or fighters however, these are fully-fledged starships, capable of extended autonomous operations, far from friendly bases.

The Federation had concerns about the vulnerability of the Mercury Class scout even before the war broke out. These ships were fast, but often not strong enough to withstand enemy fire while turning around to get out. And if such a ship was destroyed, 179 souls were lost, an unacceptably high number for Starfleet Command. When the Romulans entered the war, the number of lost Mercury Class ships rocketed, often being victims of attack form previously undetected ships. With our current knowledge we know that these ships were cloaked. 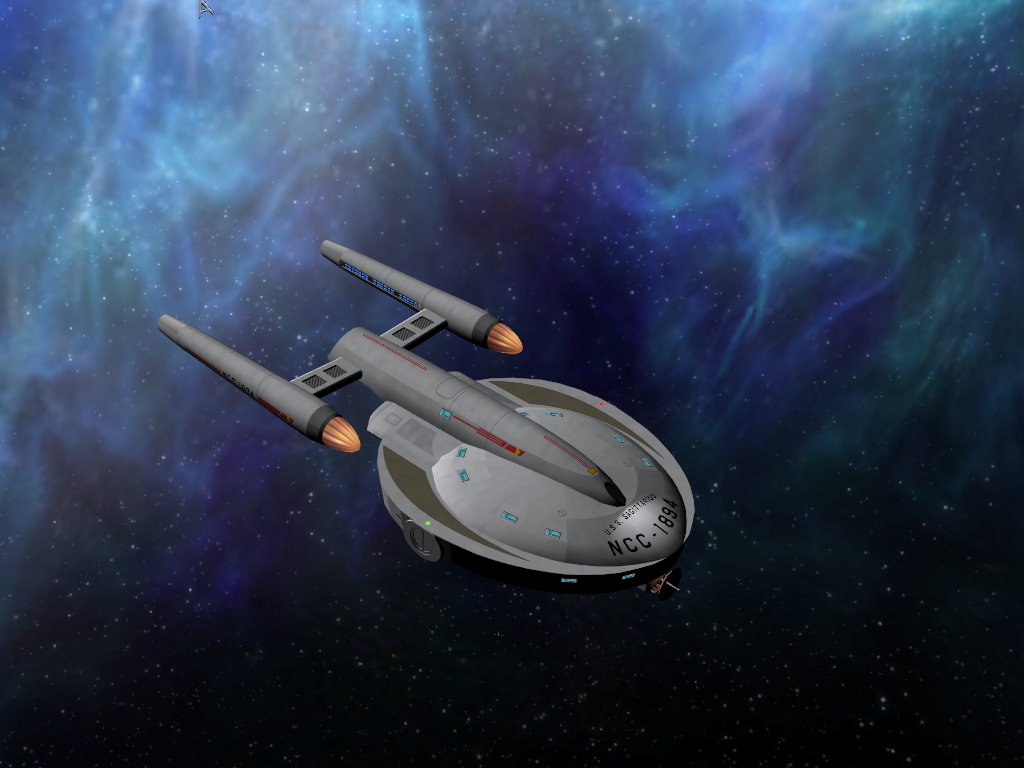 The order was issued for an even smaller, but faster scout to be built. The end result was the Archer Class, an extremely little vessel with minimal crew, but with the most efficient engines Starfleet could design. The Archer Class, just like almost every Federation ship of that era, is a generalized starship, equipped with both phasers and a torpedo launcher, alongside powerful sensors and engines. The torpedo, combined with great maneuverability means that it can defend itself against surprise, while its high speed makes it able to run away from a superior enemy.

Meanwhile the Klingon Empire decided to introduce tiny ships for a very different reason. The Klingons were involved in the conflict form the beginning, and lacking the economic background of the Federation, they struggled to replace lost ships and personnel. The Klingon Defense Force needed something fast and cheap to construct, easy to maintain, but something that can punch well above its league. Therefore they decided to build two types of gunboats, very small ships with a handful of crew and proportionally big guns. Obviously, these ships hit hard and die fast which is a very appealing concept to an honor-obsessed Klingon. 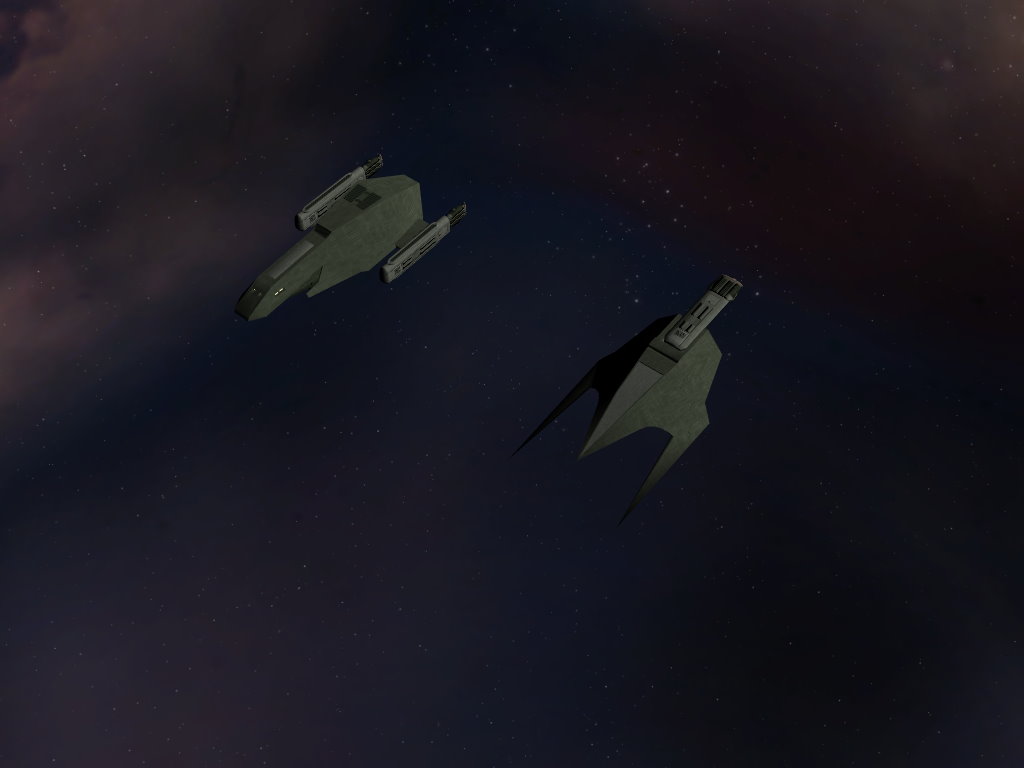 During the designing of these ships, simplicity and cheapness were the main goals. They are very basic designs, even by Klingon standards. They lack any kind of luxury, their minimal crews live in one quarter, they have no proper mess hall, science and medical facilities are next to non-existent. Their hulls lack any decoration and both ships have very basic shapes created of easy to produce hull panels. In exchange, these vessels are cheap, fast to construct and easy to maintain.

Not having any marking on the hull was actually a goal in itself in the case of the Kl’xenova Class. This ship is so different from usual Klingon designs, that the opponent may make a fatal mistake of confusing it with another faction’s ships. The ship has powerful engines and a single disruptor beam with multiple emitters, making it an excellent chaser of a wounded enemy. 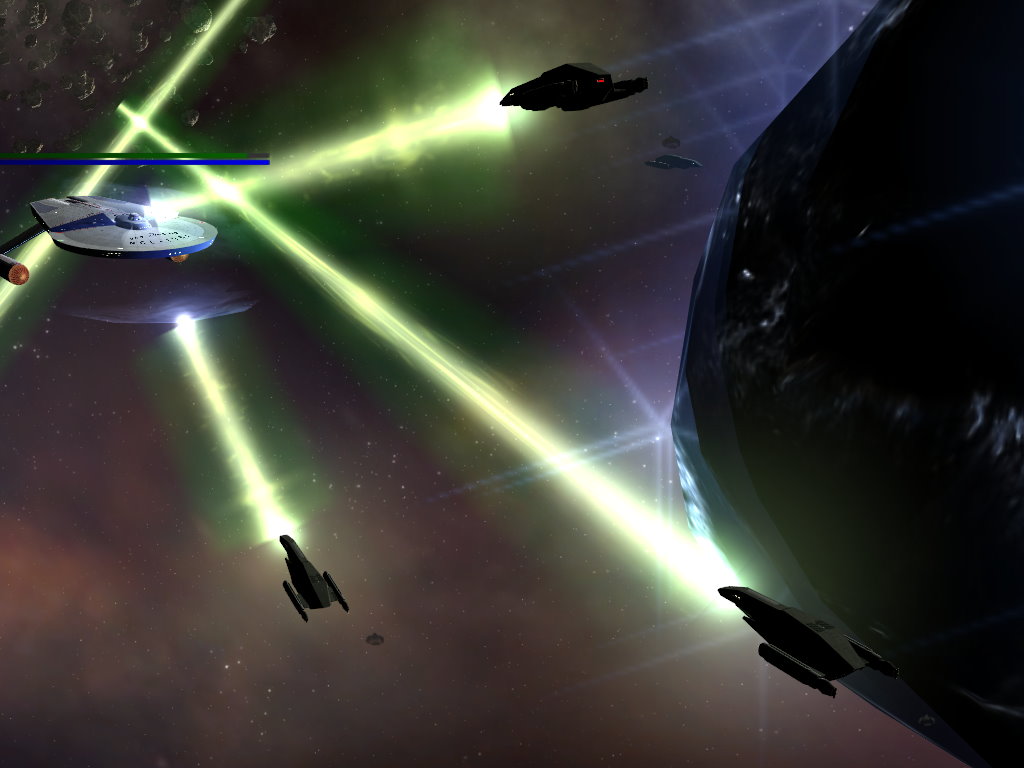 The application of the Kalath Class is very different. It is equipped with two forward facing disruptor beam cannons, strong impulse engines, but with a relatively weak shields and warpdrive. Consequently, this ship is designed for hit-and-run attacks, and is not suitable to make more than a couple of attack runs on the target. A usual strategy of Klingon gunboats was to strike a lone target with several Kalaths, and when it turns to flee, pursue it with Kl’xenovas until it is destroyed.

When the Romulan Star Empire entered the war, almost the complete Imperial Fleet was ordered on the Federation and the Gorn border, leaving almost nobody to patrol the borders in the Beta Quadrant. To quickly fill the gap in the border patrols, the Star Empire introduced the Sehin Morlatta Class, a tiny scout ships with powerful engines. Although it lacks the cloaking device – because of its size – the class was proven very successful. It turned out that it can cover more area in given time than the much larger Revastal Class scouts, which in exchange were freed to fulfill higher profile missions where their stealth capabilities were more valuable. 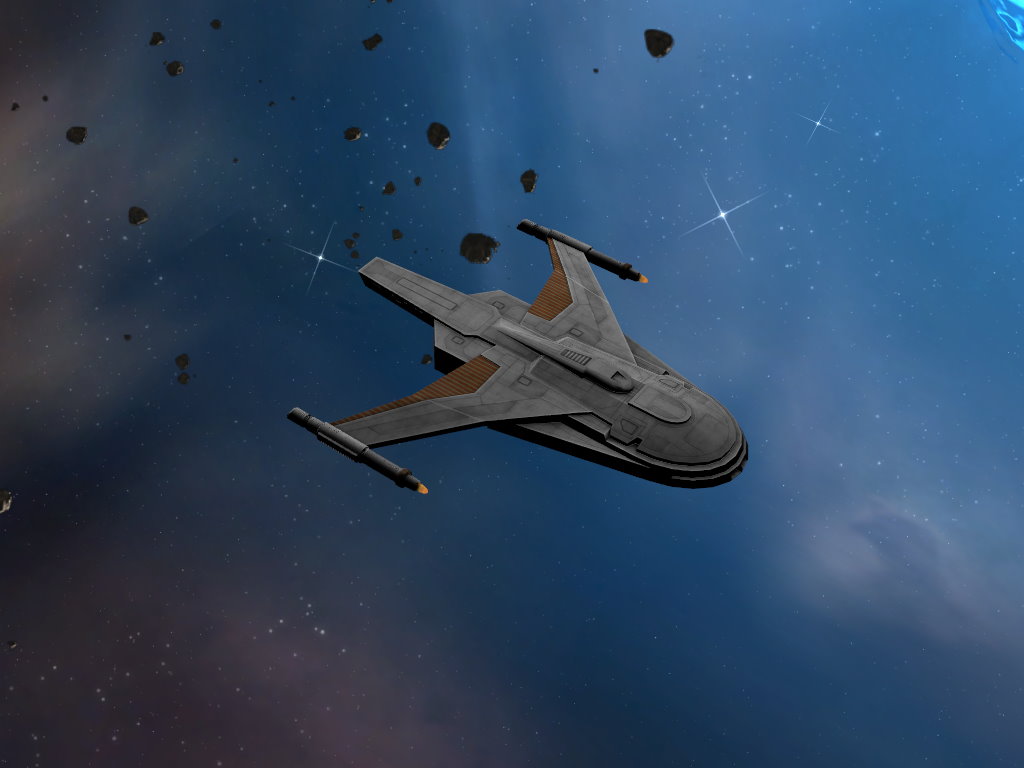 The Romulans also quickly recognized the potential of starfighters, but it was alien to their nature to fight in a coffin in space. They still needed something against fighter squadrons thogh, so the Imperial Design Bureau came up with a very small, but full-fledged starship. The Praetor Class gunboat is equipped with a single launch tube of a special plasma torpedo, designed to fight fighters. These torpedoes have extra sensors and seeker algorithm in exchange for much lighter warhead, but that still has enough punch to deal with a starfighter. In addition, if the computer realizes that it missed the target, it can still detonate the warhead with a powerful plasma explosion to still deal some damage. Of course these torpedoes are much weaker against starships, and the Praetor Class was rarely used for that. A single Praetor Class still has no chance against a squadron of starfighters, therefore these ships were constructed in big numbers and always patrol in wings of at least three. 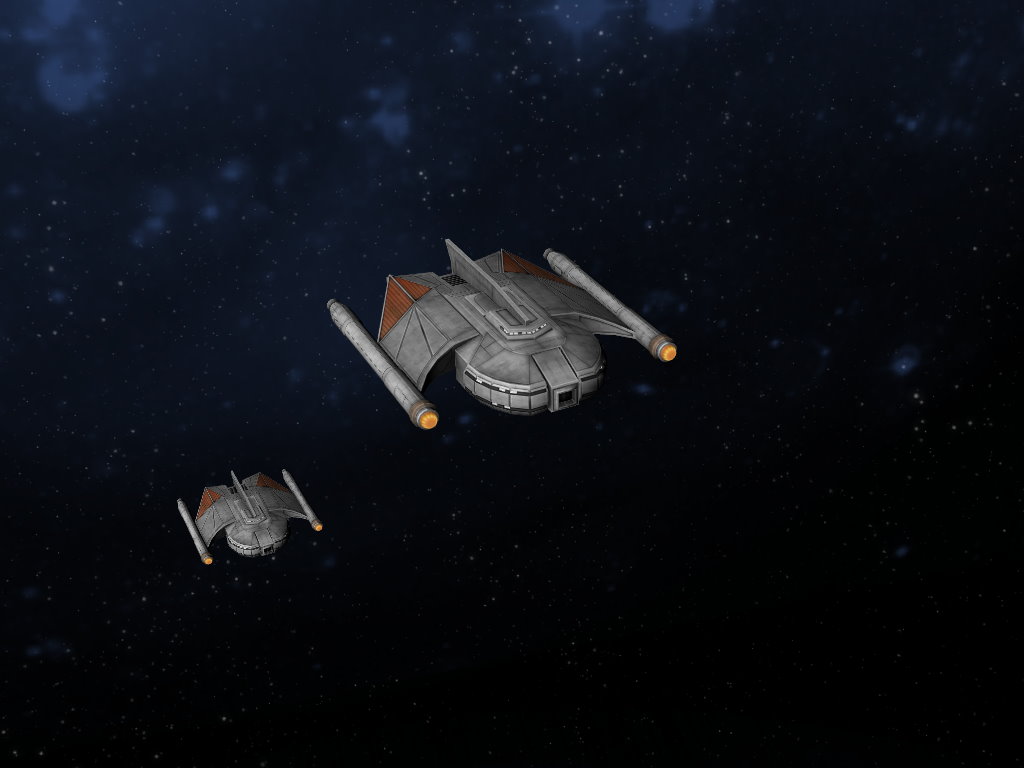 Interesting how the three factions came to the same conclusion for very different reason. The Tiny ships had a relatively short time to shine on the galactic battleground, but they have an unquestionable place in history. But why did they disappear so quickly? Military historians cite two main reasons. The first is the end of the General War. Surviving ships returned from the frontline and took over the role of tiny ships. The risk of confrontation and surprise attacks was reduced so bigger ships ventured into uncharted space. The other is the fast increase in weapon efficiency. Beam weapons became stronger, torpedoes became more accurate, and these drastically reduced the lifespan of tiny ships.

Still, these ships were a great success. The Archer and Sehin Morlatta Classes thwarted several assaults by providing intel about enemy movements. Klingon gunships not only solved the Empire’s economy deficit issue, but were also the first starships that successfully implemented swarm attacks. These ships served as a role model for ships that were designed to deal a heavy blow and hope that the enemy cannot shoot back, like the B’rel Class.

Tiny ships were introduced in Evolution to add another layer to the strategy. Scout-oriented ships are best used individually for exploration and monitoring enemy movements, while gunboats always should be used in groups to be effective.

When I check in next time, I hope I can confirm that modeling is done and that I’m onto coding. I will definitely talk about some other ships that are interesting enough. That, or the updates I’m planning on the already released materiel.