"Best Star Trek Mod for any game period."
Mod of the Year 2014 I Player's Choice
RSS Defending the Dream

We cover what changes Nemesis will make to the iconic United Federation of Planets.

Welcome to another faction update in the lead up to Star Trek Armada 3 - Nemesis. Today we're covering the iconic stars of the Star Trek universe. The embodiment of Gene Roddenberry's vision of a better future - the United Federation of Planets. 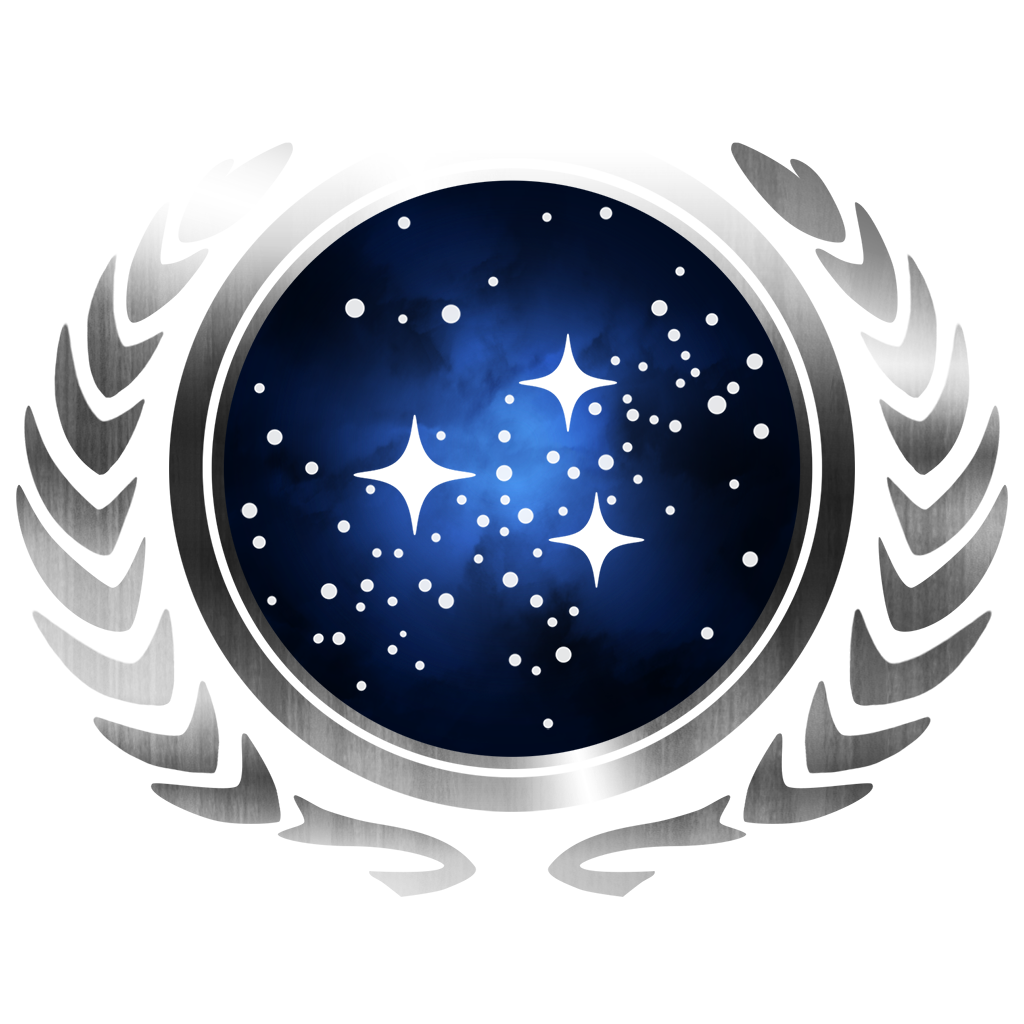 You'd be forgiven for wondering how else we could possibly change the Federation since the Defiance update for Call To Arms. To be honest, we were completely happy with the state of the Federation until we started working on Nemesis. And indeed, we still, for the most part, consider the Federation our most thoroughly fleshed out faction.

Nevertheless, there's always room for improvement and for the faster-paced gameplay we're hoping to achieve for Nemesis we felt some refinements to the Federation needed to be made. Most of the changes we've made have been focused around the Federation's research trees, rather than on their ships - expect some significant changes to the Federation's development progress when you start up Nemesis. 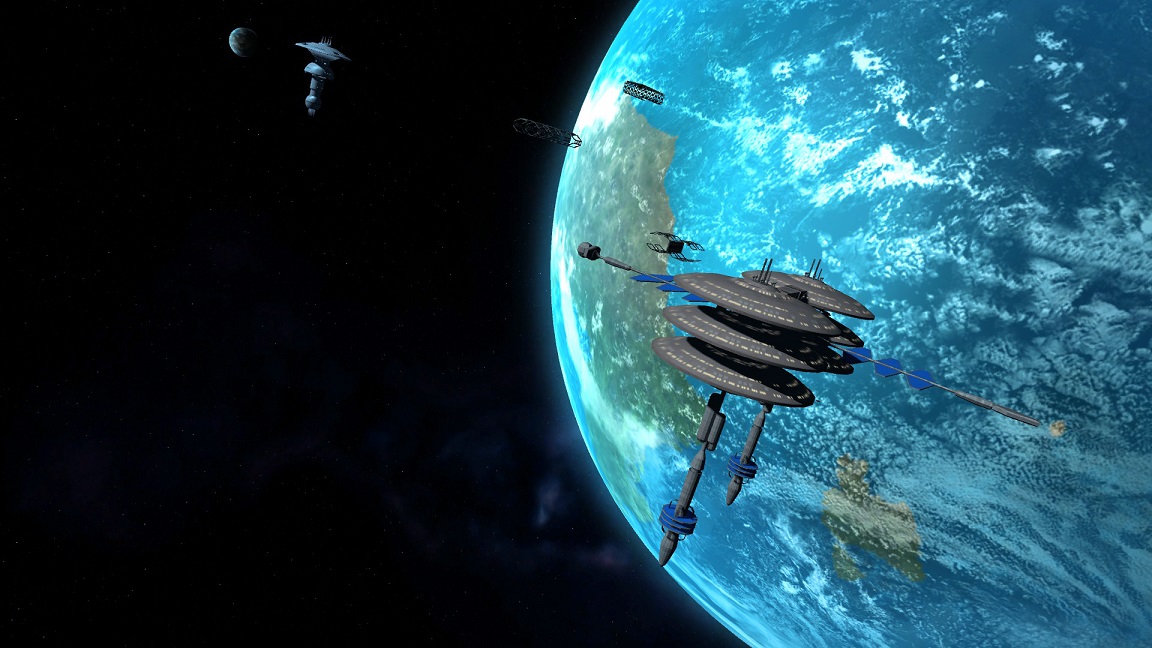 The most immediately noticeable changes made to the Federation's tech tree are to how Federation ship design research progresses in a kind of chain. Whilst progressively linking ship designs offered a feeling of technological development, we came to decide that linking everything together denied players choice in what they wanted to research and what they didn't. We felt that forcing Federation players down a mandatory research chain slowed down development, and that while the Federation's economy mitigated this somewhat, ultimately Federation players were disadvantaged by this. The new Federation tech tree allows players to skip most ship designs, so if you don't feel like researching certain ships that don't fit your play style, you no longer have to just to get to your preferred option. For example, you no longer have to deveop the Norway-class in order to gain access to the Intrepid and Steamrunner. 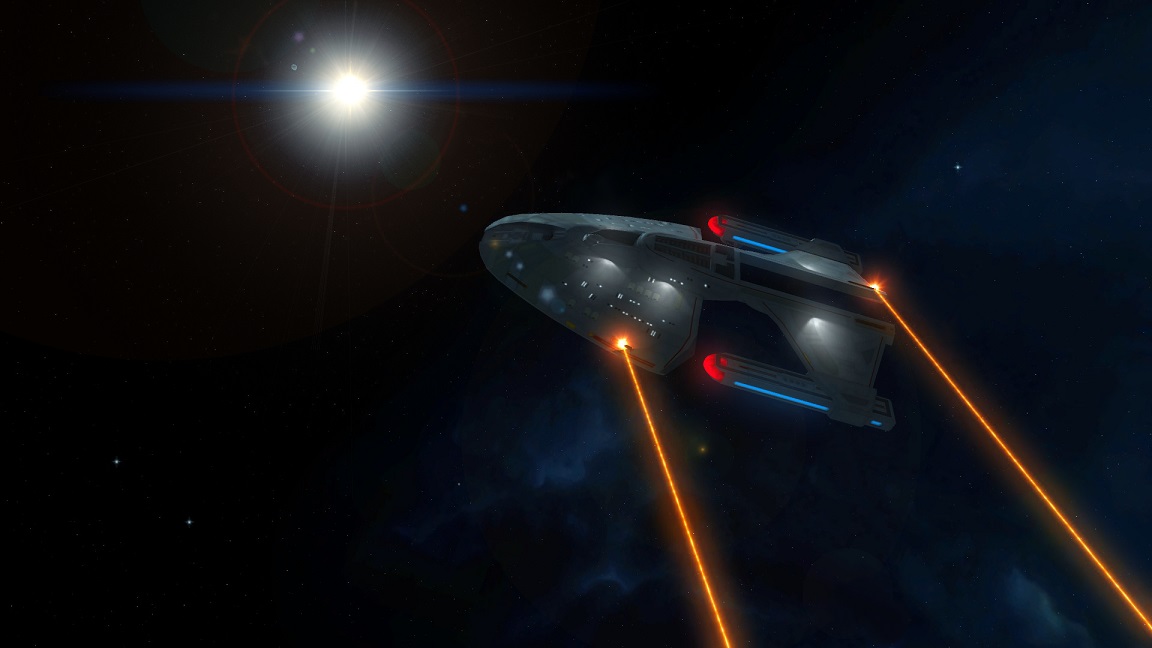 As for capital ship research, these may seem like small changes but we feel it dramatically speeds up the research process and allows players much greater freedom in which ships they want to be immediately available:

- The Galaxy-class now stands alone int the research tree, leading only to its own refit upgrade.
- The Phoenix, Nebula and New Orleans-classes now form their own short research chain.
- The Prometheus-class raider now leads to the Sovereign-class advanced battleship.
- Sisko now leads to the Typhon-class carrier, which then opens up the option to research the Defiant-class. 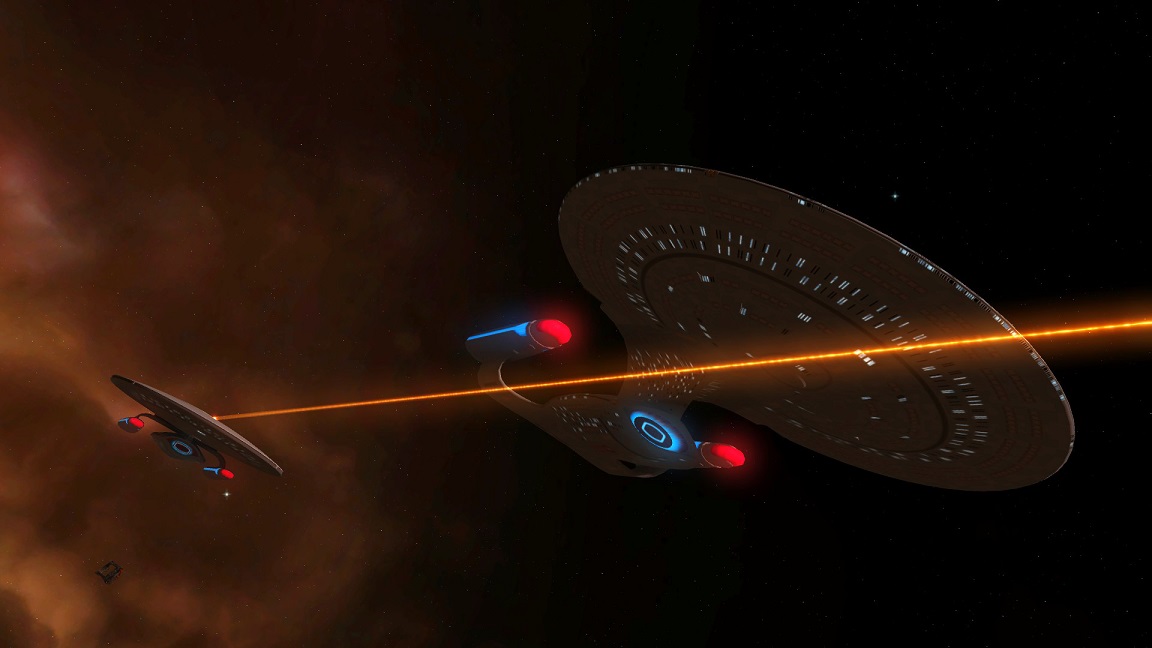 Hopefully this new order in the tech tree will both provide players with more freedom, as well as being relatively true to canon.

Other changes we've made have been to the Outposts - many players feel that they're not particularly worthwhile when compared to the full-fledged Starbases. That's understandable. Side by side a fully upgraded Starbase generally trumps an fully upgraded Outpost by a significant margin. While they still won't be able to match a Starbase in terms of firepower, armour or hull points, we're introducing new abilities to Outposts to make them more enticing to build. 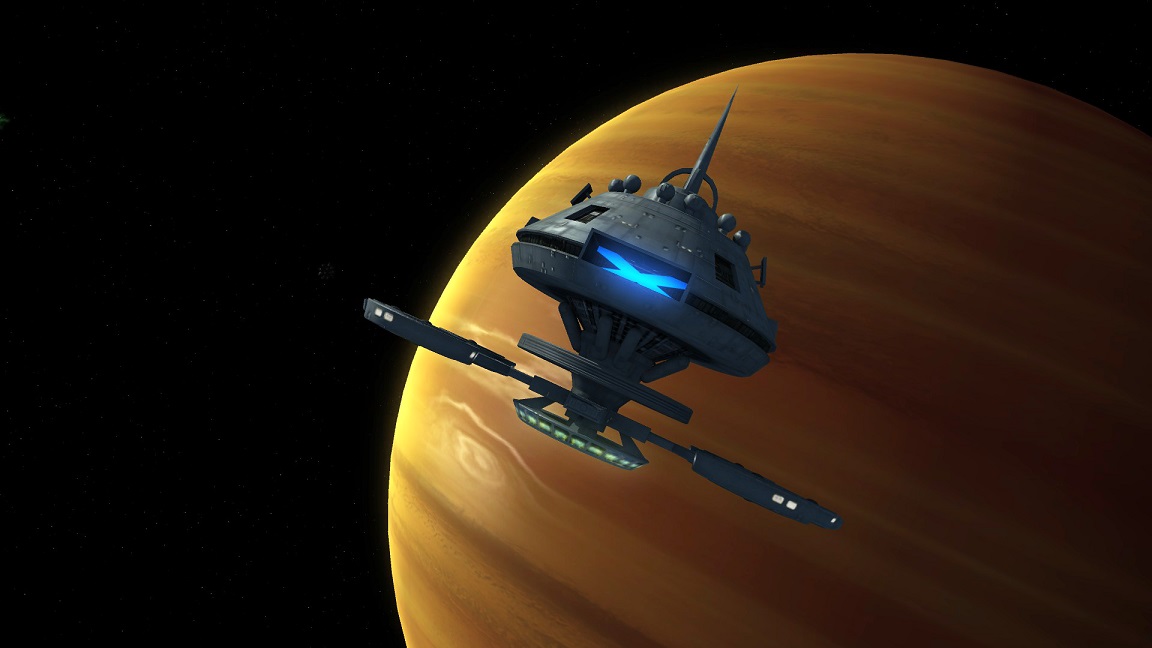 Federation Outposts can now be tailored in a number of useful ways. They can serve as defense hubs, enhancing the firepower and firing rate of nearby Starfleet turrets. Or they can be equipped with supercharged repair abilities - combined with a Nolan repair yard or two a Regula Outpost can now make for an extremely effective repair base. Keep in mind, though - a change we're making for Nemesis is for Starbases and Outposts to have limited upgrade slots. Choose your Outposts' equipment wisely.

With these changes you might be asking if we're making any changes to the Federation's ships. The answer to that question is yes, though most chages are minor. Some of the most significant have been to the Federation's hero units, specifically Janeway and Sisko. Janeway's USS Voyager is now further set apart from the generic Intrepid-class cruisers by having access to strike craft. In this case, a very special strike craft - Voyager can now launch that 24th Century hot rod, the Delta Flyer itself, to support it in battle. The Delta Flyer is the single most powerful strike craft in the game and will deal damage roughly equivalent to a whole squadron of Danubes. As for Sisko's USS Defiant, however, we felt the need to nerf it slightly. Specifically, we felt that Sisko's Self-Replicating Mines ability was far too overpowered. Expect Sisko's mines to replicate less rapidly and do less damage per hit. Don't fret, though - Sisko is still a very potent hero unit and his minefield still packs a significant punch.

There is one ship we paid special attention to when it came to balancing the Federation for Nemesis. Of the Federation's two available dreadnoughts, it's been plainly obvious that the more popular one by far has been the Polaris-class. As such, we've taken a closer look at the mighty Excalibur-class Space Control Ship. 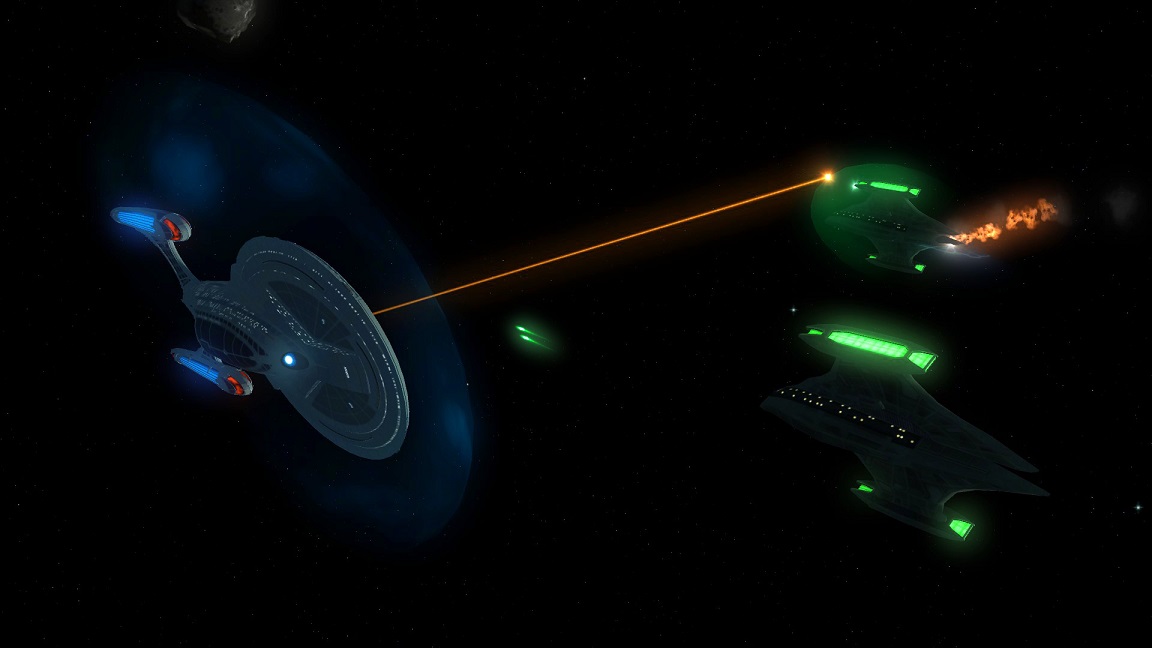 The Excalibur's abilities have been significantly tweaked in order to make this massive ship more palatable to players who might prefer its more combat-oriented cousin. The antimatter cost and cooldown times of the Excalibur's extensive support abilities have been drastically reduced, essentially turning the Excalibur into the most effective support ship in the mod, as well as still being a very potent dreadnought. Remember - sometimes the key to victory is to outlast your enemies, rather than outgun them. In that role, the Excalibur truly excels.

The Federation is ready to face its enemies in the Nemesis Cluster! Hopefully this convinces you to sign up with the Federation when Nemesis is released.

Good luck in defending the Federation!

Very exciting changes, mildly disappointed about the starbase upgrades being limited, but my economy will be grateful :p

Damn , I had so many games so far ... and would always pick up Excalibur over Polaris , lol .

Agree on Sisko nerf ... those replicating mines could change the outcome of battle relatively easily - even when facing the Borg armada , and even with Cubes . I dont think Starbase upgrades should be limited - theyre not overpowered as its now , and can be taken with determined assault . Starbases overall strength : Klingon < Cardassian / Dominion < Federation < Romulan < Borg

The biggest "superweapon" in Federation arsenal in late game is actually all heroes with maxed out experience combined with a dreadnought . Thats ... unstoppable , you can defeat almost anything but head on attacks on enemy starbases with combined bigger defence fleet . Even in that cases , some cannon fodder ships can help soak up some damage towards main heroes and overcome the odds . I found Federation very dangerous in late game - almost dangerous as Borg .

Cant wait for a Nemesis !

Any chance of having the Ambassador Probert concept in? It's a much more fitting design

No, we've discussed as a dev team and to the community years ago. The Ambassador we see on screen is cannon and that is the one that will stay in the mod.

The Probert version will probably appear as a different class in AotF when we move to the TLE component but that is years off at the moment.

ive experienced a huge glitch or bug not sure,on the nemesis map I believe it in the medium tier.it's a four person map wit a huge battlestation in the middle.i had attacked the station several times,was preparing to finish it off when everything on the entire map was killed literally every planet for me and ai dead,every battlestation also only thing left was fighters from various fleets,i have the save game available not sure how to send sumthin like that tho

this is my original post,not sure why showin up as guest

It's a beauty - we agree, but we'll stick with the (arguably inferior) design that's canon for STA3. We might use it on another project in the future however :)

- The Galaxy-class now stands alone int the research tree, leading only to its own refit upgrade. (YAY!)
- The Phoenix, Nebula and New Orleans-classes now form their own short research chain. (Meh.)
- The Prometheus-class raider now leads to the Sovereign-class advanced battleship. (Eh?)
- Sisko now leads to the Typhon-class carrier, which then opens up the option to research the Defiant-class. (WTF?)

the prome is due to gameplay balancing and they are both advanced starship designs from Utopia Planetia from the Advanced Weapons Division.

Sisko worked on several projects at Utopia Planetia and the Defiant and Typhon share common design lineage (you can learn more about the typhon from the actual game) as the defiant was the prototype it would make sense Sisko would have her first then the additional defiant classes would become available.

Just tell me which Tech leads to the Constitution.

"Nevertheless, there's always room for improvement and for the faster-paced gameplay" why? Why must every game 'progress' to faster paced game play? Some of us like slower paced matches and games.

TFF will be remaining mostly as it is. Nemesis is focused around multiplayer.

Don't fret! The Final Frontier 1.1 will be released alongside Nemesis to provide the grand strategy and exploration side of things. Look for improved in-game performance, vessel balance changes (courtesy of Bane's balance team for Nemesis), and lots of small refinements that will make The Final Frontier better than it has ever been.

So I have a question for the developing team. Is there going to be a time where we are going to add new ships to the game? Like the 3 necel galaxy ship that was in best of both worlds? Or some new factions to choose from like some that came out on Voyager? Also one that is a biggy for me on the one now is not being able to build sona ships on the cardassian dominion alliance.