Discover how Major Degtyarev entered the Zone in search of answers to the failure of Operation Fairway, and fight your way deeper towards the Centre...

With less than 48 hours remaining until the close of voting on Mod of the Year 2015, we thought it fitting to make one final big announcement - S.T.A.L.K.E.R.: Wormwood will be extending the story of S.T.A.L.K.E.R.: Call of Pripyat, but not quite in the way you might expect!

Did you ever wonder why Major Alexander Degtyarev started the game on a seemingly random hill in Zaton? Where is the rest of the Zone? How did he get there?

S.T.A.L.K.E.R.: Wormwood will begin as Major Degtyarev enters the Chernobyl Exclusion Zone through the Great Swamps, having been inserted by the military to begin his top-secret mission to discover the fate of the Stingray helicopters of Operation Fairway.
As you will soon realise, it is not just a case of simply strolling deeper into the Zone and towards the areas of Zaton, Jupiter and Pripyat - you will need to enlist the help of the local community (including some old familiar faces) and fight your way deeper into the Zone. 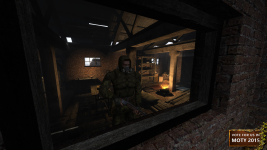 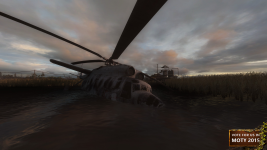 Featuring a full complement of A-Life NPCs that will change as the game progresses, numerous brand new stashes, artifact fields, missions (both to complete before you move deeper into the Zone and to come back for later) and stories, the Great Swamps are a great place to become acquainted with the Wormwood Zone before heading toward the more dangerous areas nearer the CNPP.

We hope you're as excited for this as we are!

Finally, we just wanted to thank you all for your generous support during Mod of the Year 2015 - we have less than 48 hours until the close of play, so if you're still yet to vote in the Top 100, please do head over there and vote for Wormwood! This will be our final update for MOTY 2015, we hope you've enjoyed the announcements and new media we've put out this year, and fingers crossed for a good result this year!

Thanks for another great year.

(it's my birthday please be nice and vote for us)

Hah, it's also my Birthday today too. :P

why you gotta hurt me so bad :(

My vote has been cast for a few days now, so don't worry. I really hope Wormwood gets some more much deserved recognition in this year's MOTY.

I really find this to be great news. It'll be super exciting to play the Major's first moments in The Zone. Is this going to be the only prologue map? Or will you start in the insertion point and then make your way up north through other areas?

Cool, I played a few other mods that extend COP by adding the great swamps and 1-2 more maps, and it's a nice addition. I like the swamps; COP is kinda short.

A very cool idea no doubt, but the way the project's ballooning in scale has me quite worried.

Expanded story and new levels is great news! But, please make the story and missions of high quality. I got really tired of playing SGM after a while, because there are too many pedestrian tasks throughout the campaign.

Better A-life/AI, great visuals and sound effects, more levels (esp. new ones) and expanded levels are great! I would still prefer a relatively shorter and more focused campaign, than something like SGM that goes on and on and on. It would be great though if the campaign in Pripyat was fleshed out a bit more, as that part of the original game feels unfinished.

Release this mod for your birthday n_n