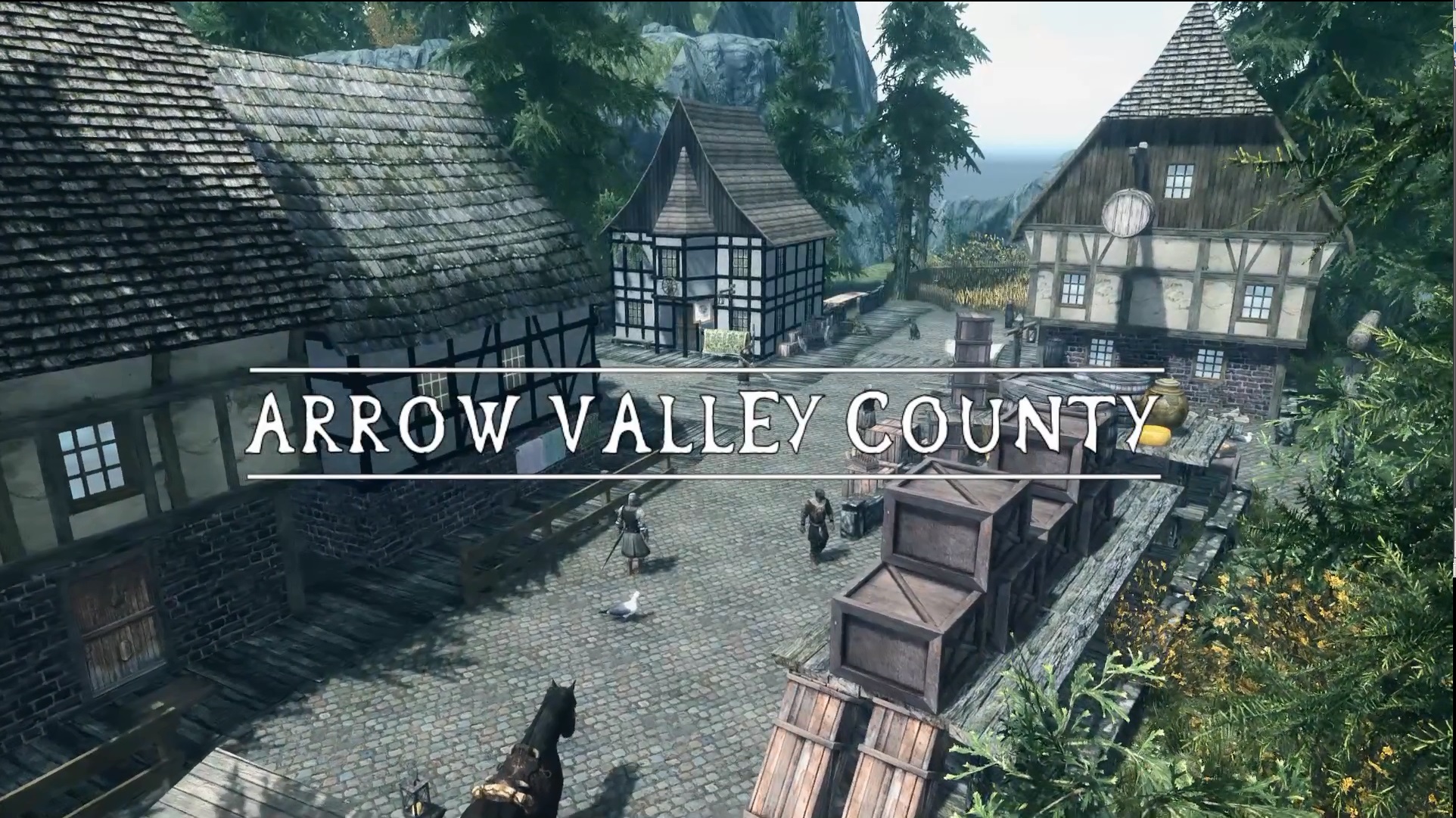 Arrow Valley is an upcoming DLC sized expansion mod for Skyrim, which will take players to the medieval inspired county of Arrow Valley, Containing two large cities, a detailed countryside with countless unique handcrafted towns and villages located across the landscape.

As this is still a work in progress there are many things I plan on adding. Some of which include -

- Role Playing elements, When I started this mod the goal was to build a new world where I could actually live rather then just visit. I want to eventually included the ability to have jobs and earn a wage and pay taxes etc.

- All out war system, I have built a city that is under siege by a unknown group, but as of now I am yet to create a story or narrative, this will be my main goal once the landscaping is finished.

As of now (16/06/18) the main landscaping is near finished, all models and textures have been created.

Landscaping 75% - The main bulk of the landscaping has been done, I just need to finish and polish certain areas.

Cities built 60% - (Redditch) Is nearly finished all houses built with interiors, Complete with NPCs with jobs and schedules.

(Muhuns Moat) - The exterior of the city is finished, but as this is the city under siege I am still working out exactly how I want the Interior of this city to look.

Quests 15% - I will admit questing is not my strong point, after many hours of tutorials and practicing I have a basic understanding and am able to create simple quests, But that being said I am confident that the finished project will have fully fleshed out and interesting quests

To promote Skyrim - Arrow Valley County and grow its popularity (top mods), use the embed code provided on your homepage, blog, forums and elsewhere you desire. Or try our widget.

What if the story did not end here? What if glory and power were awaiting you on a crossroad? It adds a new region with four cities, four strongholds...

The Mines Of Moria

This is my new dungeon i am producing and will contain 4 cells. It will include Creatures and in future releases will contain more areas to explore :)

Maids II: Deception (M2) is an adventure mod that was released episodically from 2012 - 2016 and is now complete. Join a young maid in a quest to save...

Apotheosis is a dark fantasy, open world, upcoming expansion for The Elder Scrolls V: Skyrim set across the 17 Planes of Oblivion, and 'Dreamsleeve'.

Return to Helgen is an Epic quest mod with over 40 quests, over 400 NPCs, over 1000 lines of recorded dialog. It takes the player from being a humble...

Skyros is a large-scale Game of Thrones themed mod for The Elder Scrolls V: Skyrim Special Edition. The mod will take place in a geographically accurate...