SoGE is a Star Wars Total Conversion for SoaSE: Rebellion with it's roots in the Homeworld 2 mod Star Wars: Warlords which features the two primarily sides of the Galactic Civil War, the Clone Wars, and the Yuuzhan Vong War. The current public version works for Sins of a Solar Empire: Rebellion 1.90 and, with or without, all DLC. Rated #6 players choice in MOTY 2014. An editors choice in MOTY 2015.

4.10.0 is now live! This news post goes over the team's new members, includes a lengthy change log, and talks about the mod's plans for the future.

Before I go into the changelog, I wish to take a moment to welcome and introduce SoGE’s newest staff members. First we have Wawac, who has helped reorganize and sort the garbled mess that used to be our HUD icon sheets, in addition to making a ton of new icons. Second we have another icon wizard, Service_Disconnect. This wonderful individual has created unit pictures for all of SoGE’s planets, and has made a handful of new ability icons; going forward, he will be helping with new ability icons, concepts, and ideas. Lastly, we have mmeier1986, who has made a number of Sins programs, and scripts to help check for and fix a handful of errors. Going forwards he will be continuing this work and helping squish more issues over time.

With this version released a year after the previous release, and with this release being seemingly sudden, undoubtedly some are questioning what the future has in mind for SoGE. Outside of the possible model improvement, and possible new abilities/research items, there is one elephant in the room that has never been properly addressed, and that is the mod’s performance. Simply put, SoGE’s performance in comparison to its peers is lackluster, and leaves much to be desired.

To that end, the next big endeavor, a multi-month long project, is the complete rebuild of the mod, to eliminate any and all resource leaks, and fix bugs that have yet to be squashed. SoGE is a very old mod, with work having started on it for the original -- not expansion -- Sins, and the current version was originally ported over from Entrenchment. As a result, there are multiple devil's hiding in the shadows, from ages long gone. This project will not be done quickly; with Sins of the Prophets I set up, and started a rebuild project which took a considerable amount of time. However, the end result was a mod that runs far, far more smoothly, and one that can be played with errors enabled. It is my hope that SoGE will reap similar benefits, and allow for a much smoother experience in the future. 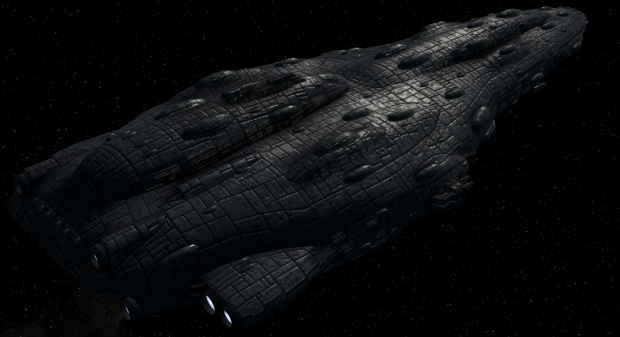 Why there's no mention of ToR under "future plans"?
Hmm I wonder....
Anyway all the changes are great. Especially removing those useless ships with overlapping uses. And the visual changes are awesome!!

TOR is being developed by a separate team headed by Seymour2012.

is there a mod page or something we can go see for updates?

It will be under this one when more information becomes available.

Sorry that was me, is there a new mod page or forum thread for us to check? Or will it be under this page still?

Same page. It's only two of us. We can only go so fast.

For now, just this one. Keep checking here.

Because even though we will be a SOGE mini-mod, we're of our own team. Lavo and I communicate, but we aren't inherently running the same operation. My future plans and his vary.

Thanks! That is good news, and yeah. Modding is a crazy game for the modders, thanks for making a brilliant mod ;)

I bid you folk good luck on your "great crusade" to rebuild and restructure the mod, and hope it goes as well as for Sins of the Prophets.

awesome, congrats on your release, and remember, if you need a hand testing or ideas to pounce of someone, just hit me up on steam like always. :)

I downloaded this yesterday, and now I have to redownload. I did this with SoTP too, back in 2014.

Question for anybody who can answer. doing a republic game, cant seem to find out how to build my titan factory. where is?

Have a look at your starting planet, it should already be build right from the beginning. If it is not, can you give me the name of the map you are playing?

Did you remember to check if sueprcapitals are enabled in the "Game Options" before starting a game, as mentioned in the loading screen?

Ill make sure to check both, and the map i was playign was just a random medium

wait! the endurance was removed?! why?

The Endurance was removed mainly as while it looked awesome, in practice it wasn't all too useful. It ended up tying up capital ship production lines, taking away valuable XP from more combat oriented ships, and the NR also had the issue of being very thin on frigates. Given all of these, it was decided to go with the Majestic as a frigate carrier.

??!!! but its a canon ship for neew republic, and the megestic is a cruiser class

please I love this mod .. but please drop the difficulty of the AI . AI is super powerful creates huge fleets

Please haha this is alot better than the previous versions, where 30 minutes into the game on normal you get swamped by fleets 3x yours even if you have 10-11 capital ships and 20-30 cruisers over and over again no matter what AI you try

in my opinion this mod is very dificult. Five minutes will invade Great unstoppable fleet)=

Is building a Viscount class supcap contingent on the Executor being researched? I have all the needed materials but it tells me I need Executor prerequisite researched first.

Please read the supercap FAQ here on moddb. Supercaps are not constructed the Sins way. Instead, there is an ability on your Titan shipyard itself, NOT in the titan build menu you get when you click on a planet. When the popup says you don't have the Executor research, that is a canary telling us that you tried to build the superdcap via the build menu, contrary to the instructions clearly stated in the FAQ.

Are the ships from the Galactic Alliance and/or Krayt/Fel's Empire going to be added?

Could I make a suggestion? I think it would be cool if the turrets on the warships actually turned and aimed up and down so that the whole ship doesn't have to completely turn to dish out most of its fire power, such as the Venator Class Star Destroyer, 2 of the turrets face forwards and the others face the side of the ship, It would be more realistic and better if the turrets turn and the AI basically divides the firepower between the (x) amount of enemy ships it is facing...

Can not build captiol ships even when enabled why?

Hey. Game Crash during game. Why?

Well If you need a playtester in the coming months im more than willing to lend a hand Im one of Lord Sets testers and we normally sniff out any problems quickly so I usually have some spare time on my hands to do other things.

Time management isnt an issue for me if your worried about it.

Why is the resource income so retardedly high on the AI? My enemies are getting hundreds of credits per second, with metal/crystal incomes in the higher 40s/50s