Sigerous 3.0 is a project which combines our best: experience, skill and indeas, leaving all the worst behind.

Now the mod obtains a new plot: Strelok's group origin, acquaintance with Ghost, Fang, Guide, Doctor, and other characters whose biography wasn't fully represented in original Stalker trilogy. We understand how difficult it may be, but we hope that our ideas won't disappoint you. Great modding experience, exciting plot and unforgettable atmosphere - this is what SGM team has been working on lately.

Here we are again, friends!
SGM 3.0: In Spite Of The Death has arrived to moddb!

Hello to all fans of SGM! We are pleased to announce that development is ongoing and will be brought to release in late 2016. Know that many people are waiting for our work and we have gathered all the best forces to develop the best parts from the SGM.

Sigerous 3.0 is a project which combines our best: experience, skill and indeas, leaving all the worst behind.
Now the mod obtains a new plot: Strelok's group origin, acquaintance with Ghost, Fang, Guide, Doctor, and other characters whose biography wasn't fully represented in original Stalker trilogy. We understand how difficult it may be, but we hope that our ideas won't disappoint you. Great modding experience, exciting plot and unforgettable atmosphere - this is what SGM team has been working on lately. Believe in us.

Alright, Che and Destroy said a lot and we've already mentioned SGM 3.0 in one of ISOTD articles, but some information must still be added :)

What happened to original SGM 3.0?

Unfortunately, SGM had been dying since 2014 before things turned around. There are a lot of reasons and here are some of them.

Nicolai wasn't that motivated anymore. He was offered a few plot variants, but none of them would fit. A few times SGM 3.0 fainted and rised again, but eventually the mod ended up being in crysis. Nicolai was used to working mostly on his own, but the project appeared to be a tough work for one man. Take a note that SGM 3.0 has been in work since 2012. Since then modding requirements had been changing dramatically and that meant SGM 3.0 became outdated even before its release. What's more, a few people of the team left the project for various reasons. Contact was lost with Sesa, the plot-writer. We don't want to touch political topics, but let's face it: she used to live in Eastern Ukraine before the conflict and was last seen online in November 2014. According to some information, Sesa moved somewhere else for other personal reasons, so we hope she is alright now.
In September 2014 Nicolai posted the list of SGM 3.0 features, but soon went quite. By summer 2015 the project fainted again.

How was the mod saved and reborn? 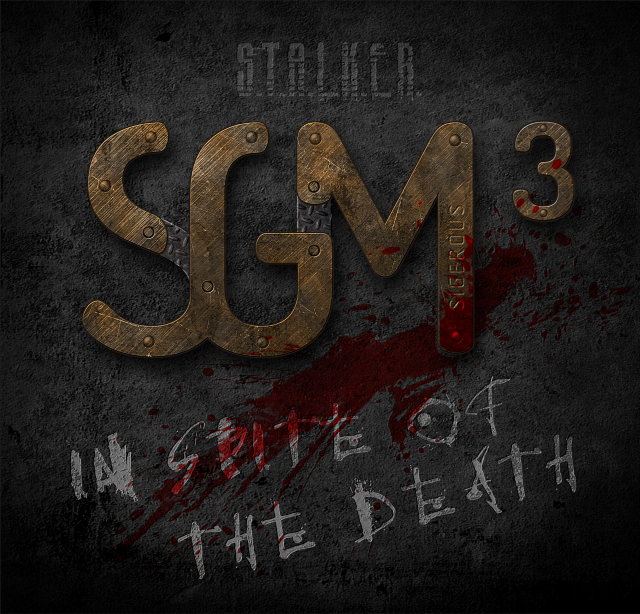 I talked to a guy from sigerous-forum named Banterface, who had been helping Nick all along. He mentioned that SGM 3.0 is almost dead. Even though I hadn't been a fan of SGM lately, the feeling was...great mods must not die just like that. Soon a small group of enthusiasts came together and made a rebirth plan. Props go to Che707 and Destroy here as long as these guys absolutely made it.
Meanwhile, we had a discussion between In Spite Of The Death members and decided to support SGM 3.0 for both projects sake. Eventually, a great team of modding professionals and combined projects forces was organised. What about Nick? Don't worry about him, while GeJorge found second breath and has been in a good mood since then.

What are we going to do now?

Oh, we'll simply finish release SGM 3.0. The third part got a title "In Spite Of The Death" not by an accident. It showcases both the plot and the real history of sigerous mod and, well, does also mention the name of the team which took part in SGM 3.0. The mod will include good old SGM features and some ISOTD atmosphere specifics.

Sigerous will have been released by the end of 2016, but maybe even earlier. English translation is planned.
You can check mod features on our moddb forum. Feel free to ask questions and make suggestions.
Of course, we'll be adding more information and images to the gallery.

Friggin' sucks man!! I was looking forward to this.

This is probably dead.

has 3.0 been released? cannot find a download link anywhere

we need some updates!!!

Mod's not dead guys - still being worked on.

is this mod still alive???

Single Player
Tags
Embed Buttons
Link to SGM 3.0: In Spite Of The Death by selecting a button and using the embed code provided more...