Mod now works with Take Hideouts, if you want to own your own hideout! Credits to ADamnSexyName, Dawa221 and Modbrowse for item models. Check out their stuff!

The mod now features several gameplay changing effects (lots of thanks to 8thor8 and Bleyck)! Thanks for recent fixes by mylittletantan!

Big thanks to 8Thor8 (from the Distinguished Service and Sergeants for Hire) and Bleyck (from Iron Will: Kleptomania and Wound Experience) and mylittletantan (from the Equipment in Encyclopedia, Tantans Tournament and Item Encyclopedia for helping me with scripts! Check out their other mods, they work very well with Scum and Villainy!

Compatible with killing bandits raise relations! Finally a reason to clear the crime!

I highly recommend downloading the Bannerlord Mod Launcher. Load orders are currently the biggest causes of crashes and launching the game through the direct .exe continuously changes load order for the worst.

You can edit the config file of CustomSpawns to turn on debug mode. This will show you where parties spawn (in case you are impatient).
You can download Ardonnay's Troop Changer if you want to recruit troops yourself in Towns/Villages (this is NOT a requirement of this mod, it is an additional feature).

This mod adds new factions, save games without the faction in them will not be compatible.

Step 0: If you had an old version, verify your game files! You may have old versions of SPClans.XML or SPCultures.XML.

1. Install the Custom Spawns Clean API
2. Download the Scum and Villainy 22.0.1 mod for 1.5.2.!
3. Extract the .rar into your Bannerlord folder and tick the boxes in the launcher for both the Custom Spawns Clean API (or Calradia at War) and the ScumAndVillainy mod (or install through Vortex).
4. Don't forget to unblock the DLL if your windows blocks it!
5. Install Distinguished Service if you want to be able to get access to the new randomly generated companions with specific skillsets that you can hire at gang hideouts, black markets and slave markets.
6. Optionally (may not be updated) download Ardonnay's Troop Changer (choose the correct version!) and the optional files on this page to allow the criminals to be recruited in towns/villages. If you are using this function, make sure to save and load the game after you start. Also please carefully read the mod page for more information.

When you boot up the game, bottom-left should show the mod is functioning properly.

Recommended Mods
Movements of Calradia (another Custom Spawns mod, more neutral/helpful factions)
Equipment in Encyclopedia (see what the new scum and criminals are carrying)
Item Encyclopedia (look up items added by Scum and Villainy in the encyclopedia)
Tantans Tournament (set up tournaments)
Party AI Overhaul (allow your own gang/faction to only recruit criminals! You can do this by selecting the Brawler, Scum and Vagabond troop trees)
Kleptomania (Complete your criminal record, steal from villages and towns!) 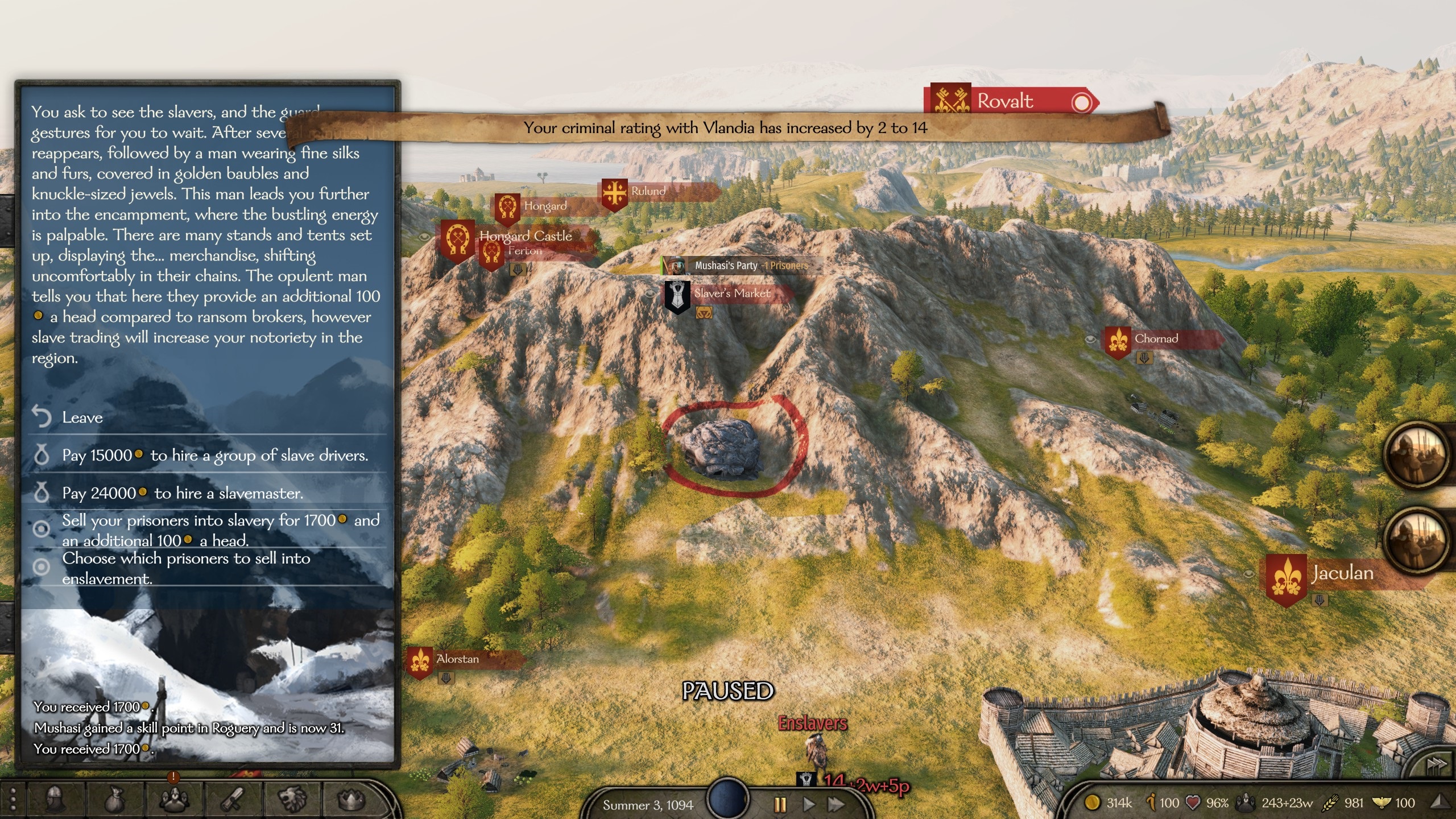 This mod requires the Clean API of the Custom Spawns mod:
Nexusmods.com

Install it and do not forget to activate it in the launcher along with the Scum and Villainy module!

Ever thought it was weird that gangs play such a big role in the cities, but there was never a sight of any organized crime? Well now there is!

This mod adds organized crime to the game. Several new parties will roam the map harrassing villagers and caravans. Migrating clans will actually migrate to other cities and slavers will sell off their own children for profit. Smuggling and fencing stolen goods will be present on the overhead map.

The Kingpin is the leader of the Crimson Cartel and rules the deserts and steppes of Calradia. The Robber Baron leads the Iron Fist and roams around in the Empire and Vlandia. Finally the Warlord rules the Kingslayers, who are readying themselves for a war against all kingdoms and nobility.

All services offered by gangs and outlaws is on a "need-to-know" basis, which means that if you do not have enough denars to afford their services, you do not need to know about them. If you are visiting slave markets, bring prisoners. If you are visiting gang hideouts or black markets, bring enough coin to pay their fees or recruit their troops. If you are planning on visiting the Seven Scimitars of the Shiting Sands, you better have plenty of troops and coin to keep them at bay and offer their services to you.

Special unique troops (Juggernauts, Warstompers) are extremely expensive, but if you look out for the special parties that spawn, you can imprison and recruit them for absolutely free. Additional unique troops (Deadeye, Impaler, Harvester) can be obtained from hideouts, pirate caverns and markets and are upgradeable with the Disciplinary perk (Rogue Hunters, Wild Woodcutters, Furious Fisherman).

Additionally, more peasant parties roam the map. As bandit lure or as defenders.

Organized crime has more than five own troop trees. Below are the largest ones, but in total there are over 100 new troops! Each troop has at least eight item sets (most between 6-12), so that not all troops look the same while in combat. 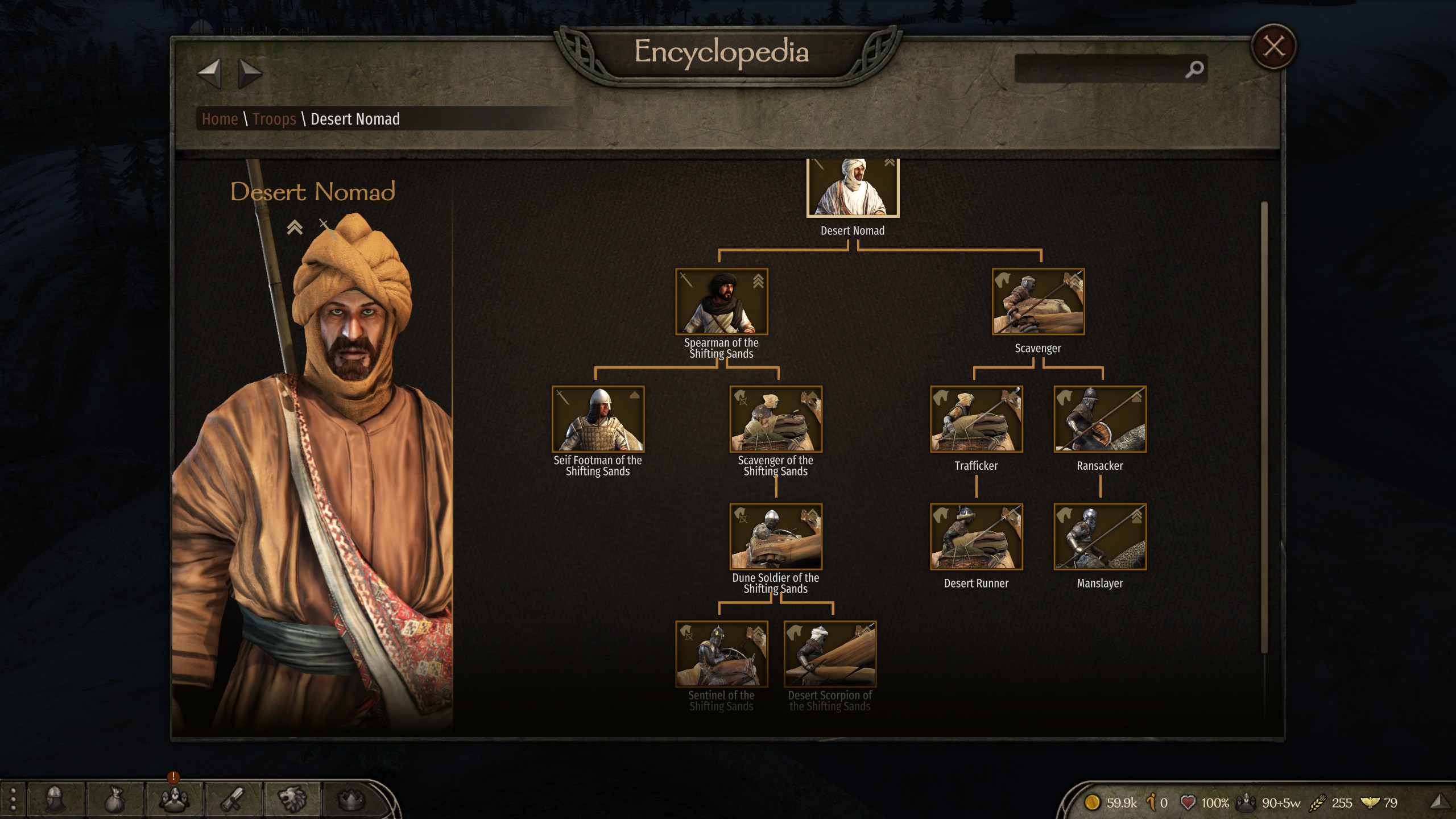 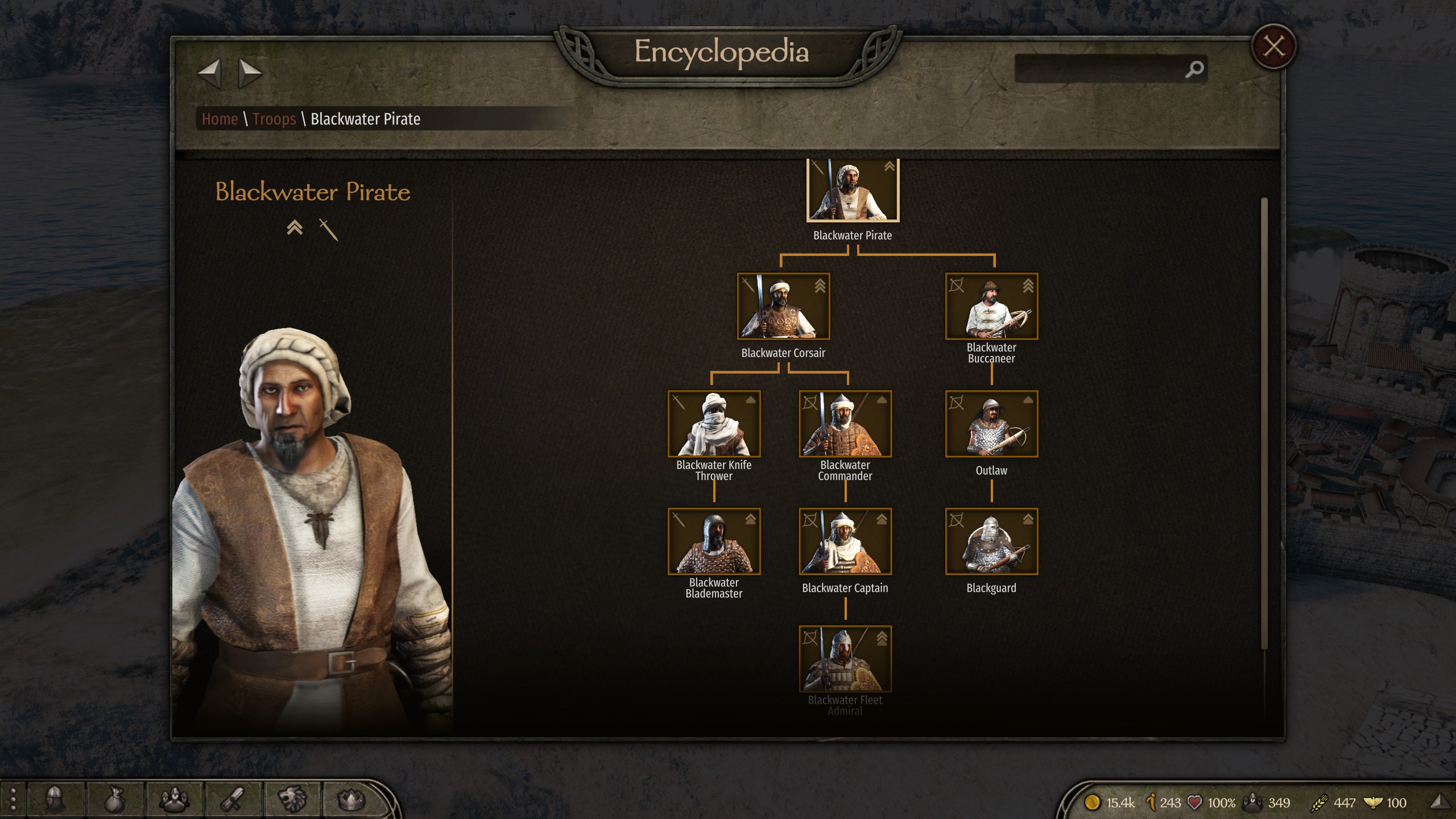 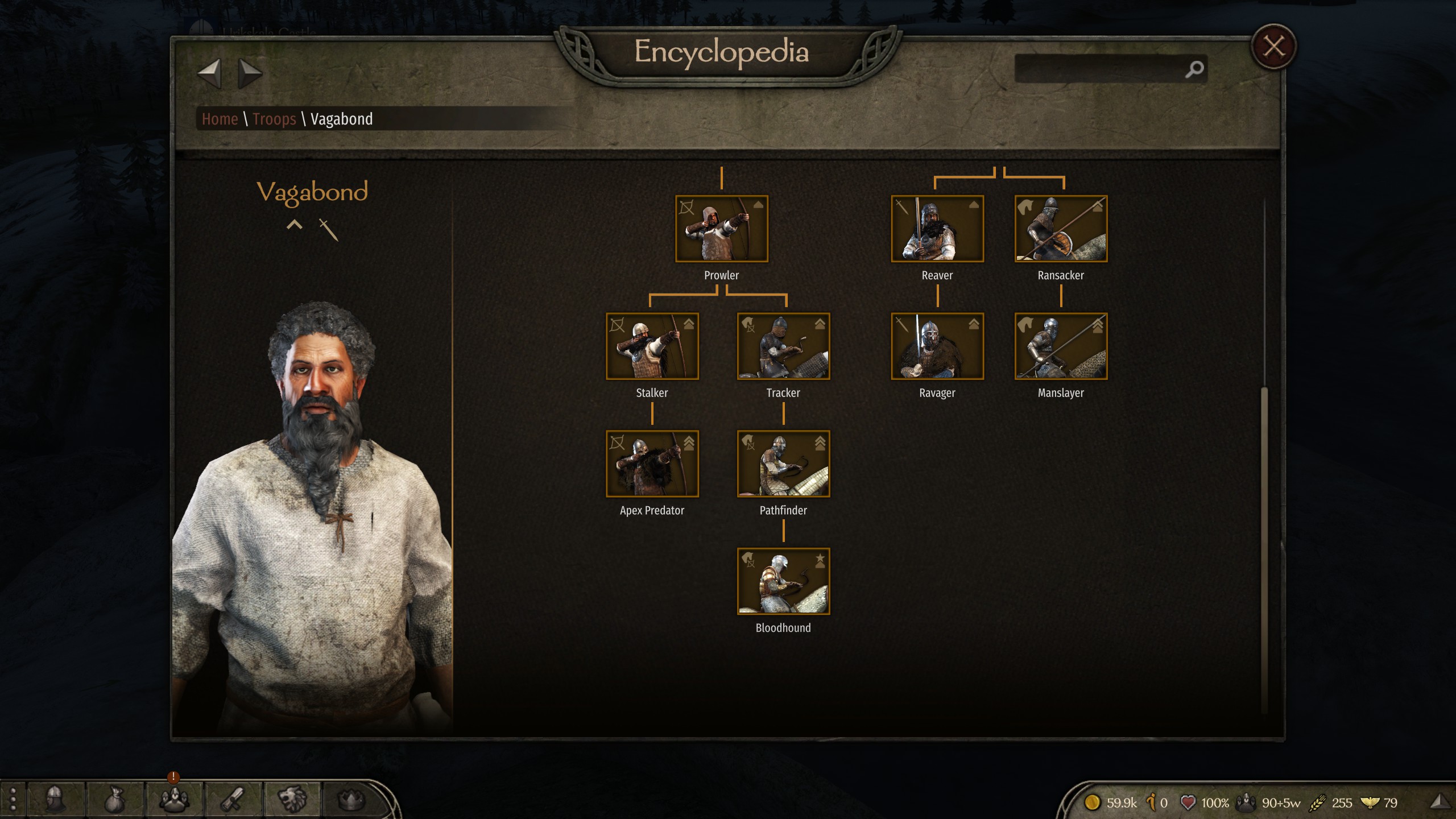 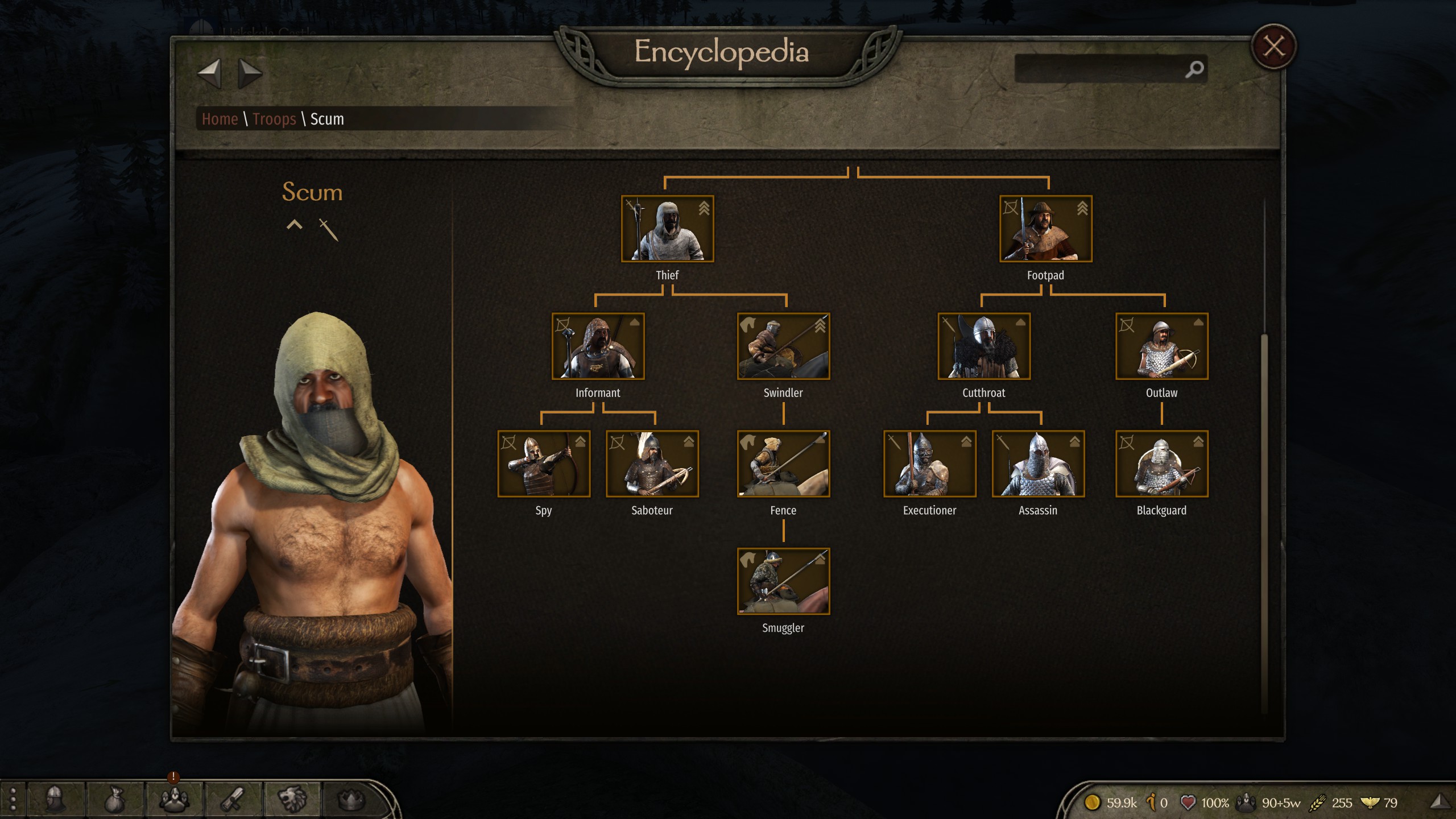 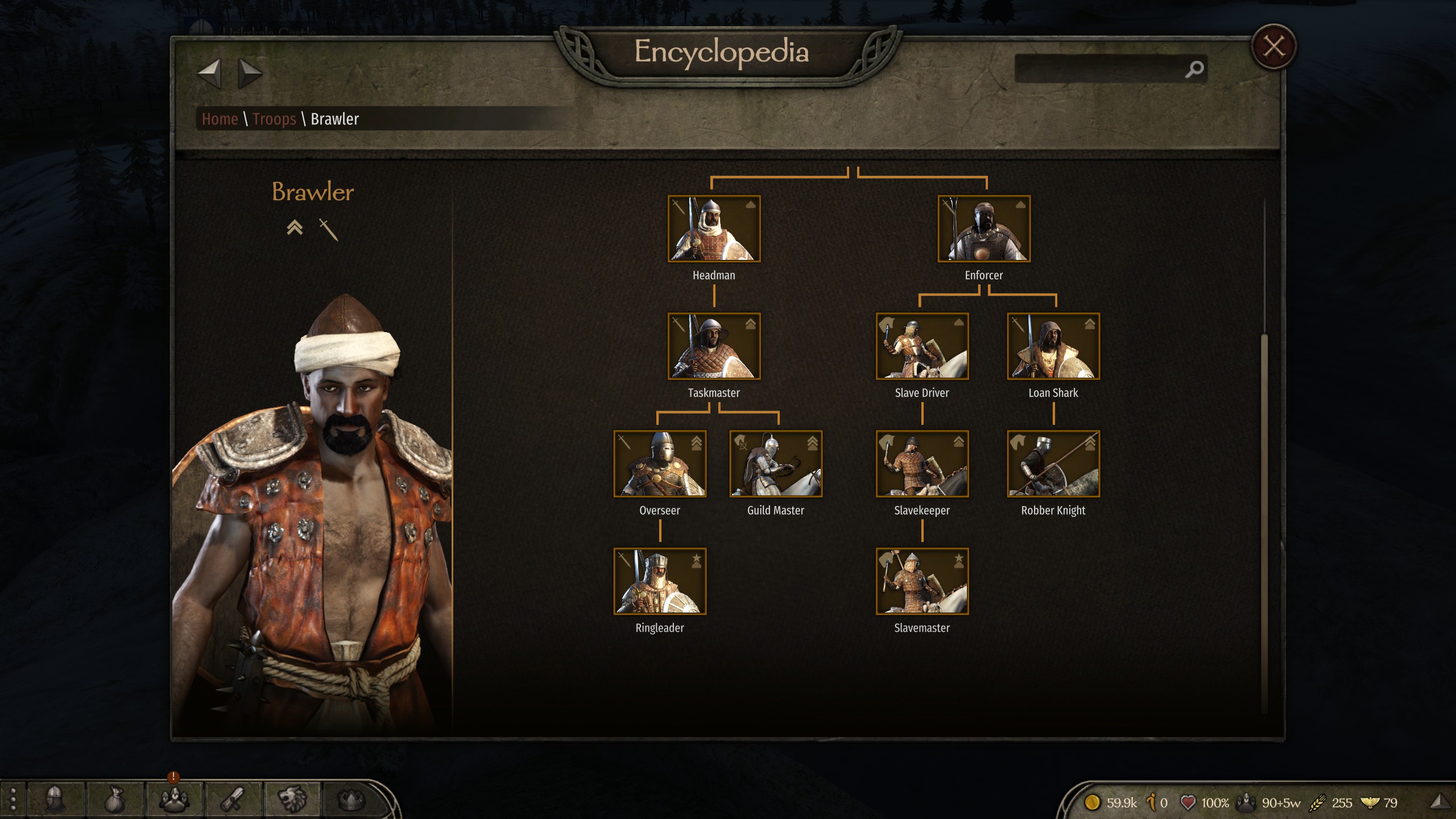 Read the information on the CustomSpawns mod for maximum compatibility. Thanks to Anopey for developing CustomSpawns.

To promote Scum and Villainy - Organized Crime 23.0.0 - Black Market Expanded and grow its popularity (top mods), use the embed code provided on your homepage, blog, forums and elsewhere you desire. Or try our widget.

New scripts, armor, weapons and much more units and parties than the previous versions. Required latest Custom Spawns Clean API or the full Calradia at...

Hey cena, I've now updated the mod, sorry for taking so long. I mainly update on the Nexus but try to keep it up to date here as well.

A mod for Mount and Blade 2 Bannerlord that will be set during the Third Crusade. It will provide an immersive and historically accurate experience but...

a singleplayer map i made for bannerlord. you can play it in the custom battle mode through adding the folder into bannerlord/modules/sandboxcore/sceneobj...

The best way to get stronger is by struggle. The mod "Wound Experience" for Bannerlord adds experience points to any troop which survives getting wounded...

Trial of the Seven Kingdoms

The mod is currently available on Nexus and will be released onto ModDb shortly. The timeframe takes place right after Roberts Rebellion, but with our...