Korax' Heritage: Scattered Evil cross-breeds a 3D first person shooter with a fantasy role playing game in the world of Hexen. Some of its features: 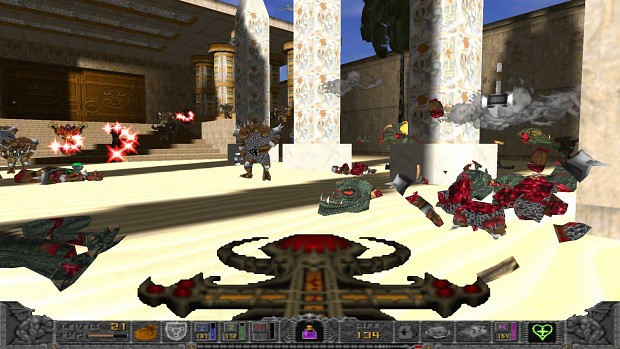 Throughout the development of Scattered Evil, there has been steady progress replacing 2D sprites with 3D models. While the first public beta in 2012 used very few models, by the last release in 2019 the environment was nearly exclusively 3D.

Scattered Evil 2.0 takes the logical next step towards a full 3D game: NPCs and monsters. NPCs have been converted from freely available Wavefront and Blender assets, reskinned and animated by us. Some of them have also been extensively modified with equipment like weapons, cloaks and helments. 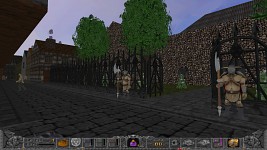 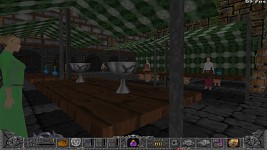 Unlike DOOM and Heretic, the Hexen community only created MD2 models for some of the monsters, so we had to start small. Building on the Ettin model by Cain that had animations for walking, attacking, standard death and xdeath (overkill), I added a damaged version missing limbs, as well as custom weapons replacing the standard mace and custom skins to make visual identification easier. 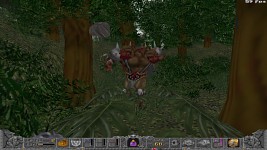 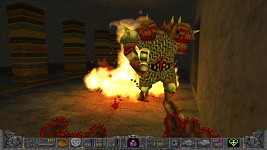 Building upon the Chaos Serpent by Slyrr that included walking, attack and standard death animations, I've added a damaged variant missing bits and pieces from horn to tail. Since there was no xdeath animation included, I let my inner child go wild, cutting up the monster in pieces and make the chunks fly everywhere (watch the severed head bounce off the floor twice before finally coming to a rest). 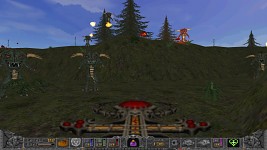 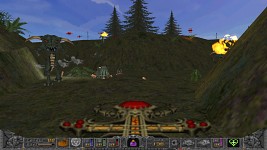 Instead of listening me drone on, watch the video below for a demonstration of the new models:

This latest version reinvents the Journal, introduces a new feature (crafting), and adds many small quality of life improvements.

The biggest new features of this release are the high resolution HUD and fully animated 3D models for the Afrit family.

This version introduces fully animated 3D models for many monsters and NPCs.

New features include an upgradeable mansion, a map scroll for quick reference and new dungeons.

3d models from the 90s look like crap sprites are were its at! thas way DOOM stood the test of time I'm sure it a fantastic mod but should have never went 3d. plus their are SO SO Meny sprites out ther to ues

When you say "I'm sure it a fantastic mod", does that mean you haven't actually tried it?

Can you add an option to turn off 3D models and use sprites instead?

If you mean the monster and NPC models, you can still download Scattered Evil 1.9 or earlier. If you mean all 3D models, you'll have to go back to the first beta release in 2012, available on SourceForge (it does have a few 3D models, but the vast majority of assets are sprites).

Yes my problem is with monster and NPC models, It would be nice if there was a way to switch between 3D and sprites, do I really have to use an older version of the mod?

Can you add a way for it to be compatible with delta touch?

You'll have to talk to the Delta Touch developers since they decide which source ports are included in their app and they haven't included Vavoom this far.

I'm dying to play this glorious mod but I'm only familiar with GZDoom mods. Can someone pm me to explain how to install it?

That doesn't work. I have Hexen in Steam and a folder there called mods and I unzipped the mod there. When I run the Bat file I get this

If you haven't put a copy of hexen.wad into the game folder, you need to run setup.bat to specify where it is located.

RambOrc. Thank you from the bottom of my heart. I've been trying to get this game running to no avail for two weeks. Your solution of putting the WAD file in the mod folder was spot on. You sir are a digital messiah LOL. Thank you.

There is one thing. The game is a bit slow. Like its sluggish. I have a VERY powerful gaming PC. Is there anyway to rectify the sluggishness? Its like everything is slowed. There's no lag. What it is that the world seems slowed down.
Any help would be appreciated.

On second thought, is the world slowed down or the player and his actions? Until you reach 10 strength and 10 dexterity, movement and weapon swings are slower than in the original Hexen (conversely, over 10 faster).

The world and the player, the enemies are slowed down. Its slightly off, I don't know. Maybe its because I'm far used to playing Brutal Doom (for an example) in the Gzdoom engine which is optimized and very fast. I don't know. I can't video record the game. I really wish I could. When you play it you can definitely tell the speed of things is a bit off. Its a playable mod but it shows over time.

Nevermind. you were right. Disregard my message. I did something to the dexerity in the character sheet to increase weapon speed and inexplicably the problem cleared up. Weird glitch. Will keep posted if I find any other speed dips in gameplay.

Over time and with different character builds, the difference between the three classes can become HUGE. You can try it quickly by starting a game on easy difficulty with RPG complexity Old School, where you receive 9 points every time you level up. Roll a fighter and put all your points into strength and dexterity and get to level 5. Then roll a mage and put none of your points into strength and dexterity and also get to level 5. It'll be like day and night as far as character movement, firing, casting and swinging speed goes.

You can enable the fps counter under video options and check what fps you get. If it's below 55, best make a screenshot and post it here.