Once Zaros, the empty lord, ruled over most of Gielinor. Zaros was feared by all but even he could not hold on to his power forever as he was betrayed by his most powerful general, a mahjarrat called Zamorak. This brought an end to Zaros rule. It's the third age on Gielinor now... a time of total war! More info: This mod will aim to have most of the races of Gielinor known to have participated in the wars. Also I will first focus on making units and custom settlements before I try and make a campaign. Playable factions are: Zarosian Empire, Saradominist Kingdoms, Zamorakians, Guthixians, Tirannwn, Fremennik Tribes, Followers of Armadyl, Hordes of Bandos, Desert Empire. 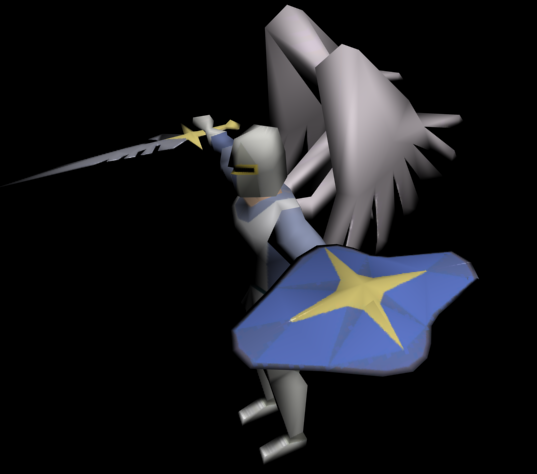 The concept is really cool, but the shape of the shield is a bit odd. Not quite square or kite, vaguely in the shape of a Saradominist star, but... blunted. Maybe he should have a star on his torso? Or a few of them, scattered across the unit? Maybe some sort of plume or crest on the helmet, or a pair of stylised wings?

Unless he's the most basic Icyene warrior he looks a bit underdressed, is what I'm going for. If he is, then that's fine - the bling is for the more elite units, of course.

The shield I got was from Zilyana and it is indeed the most basic Icyene unit.