Brings the nations and times of Rome to the world of Victoria.

Hey! Are you still working on it? (Rome 2 Victoria)

This mod is very much dead however a new similar roman mod by another creator is being developed atm which I think shows great promise!

The mod is called Victoria 2: Return to Antiquity. This mod is an activly devloped and better realisation of this idea. The head developer for this mod is Lucullus, while I am also involved. A discord link can be found here: Discord.gg

I said in my last post that what I was planning to do was for more time consuming and difficult than I first thought,I was right and I was wrong as all though I realized it would be more difficult I didn't realize it would be so much more difficult and I basically left it dead in the water.

And then Imperator Rome was announced, then released, and I was personally underwhelmed.

Therefore I felt Id share some screenshots of content that would have made it into the mod and what would have needed to be changed/fixed. I have to give credit to the Rise of Rome mod team for supplying huge progress from the development of their mode for me to utilize so big thanks! There will be a more extended gallery in images this post will only summarize significant points. 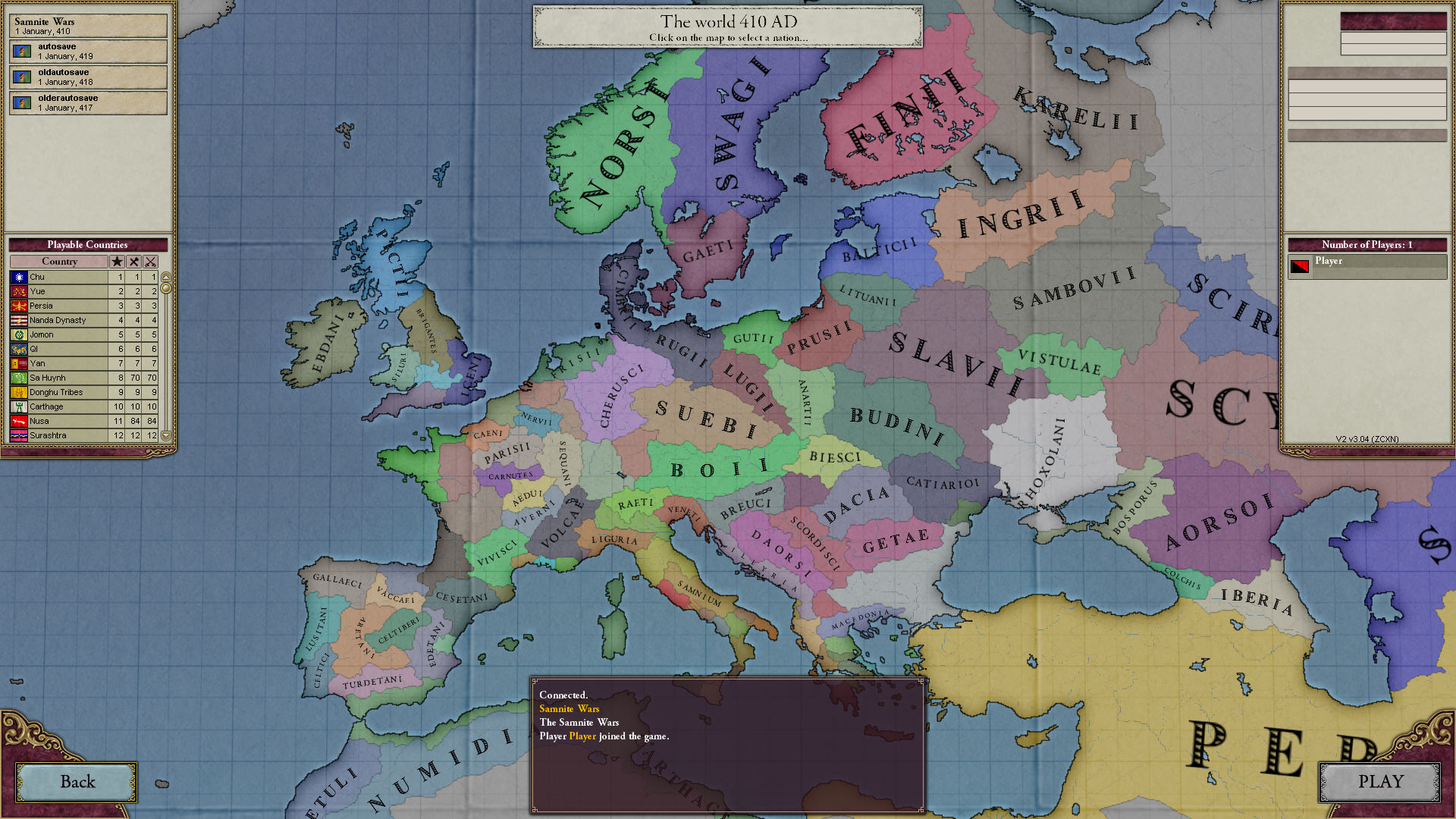 This image shows some of the many barbaric states and some of the Mediterranean and highlights what areas in Europe would be populated and some of the states that would populate it. As this is a earlier time period than that of which RTV would be set many nations would be changed however many states seen here would remain as cores or unions. 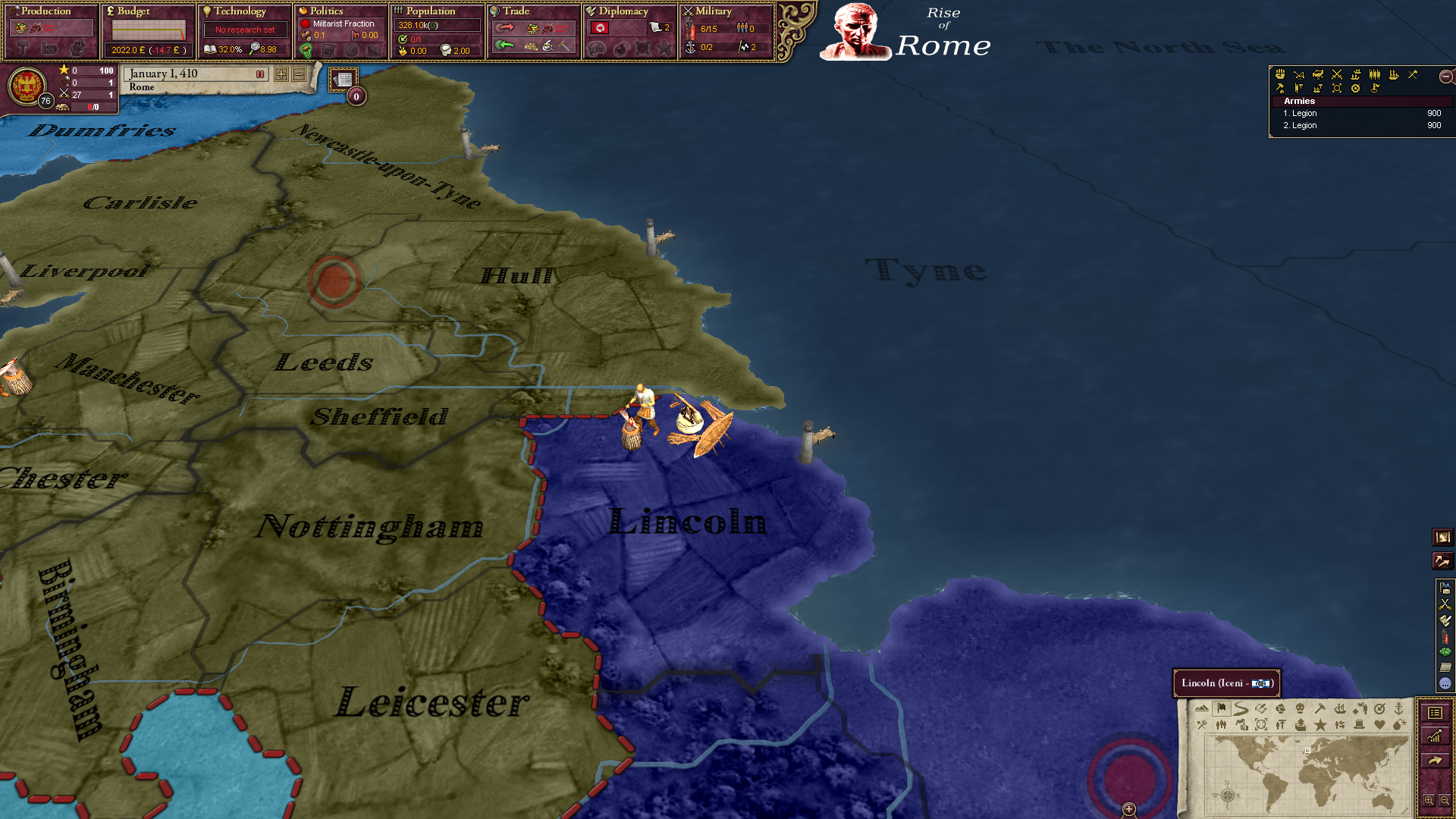 A example of a reskinned manufacturer. Something that most likely would have featured in the mod. 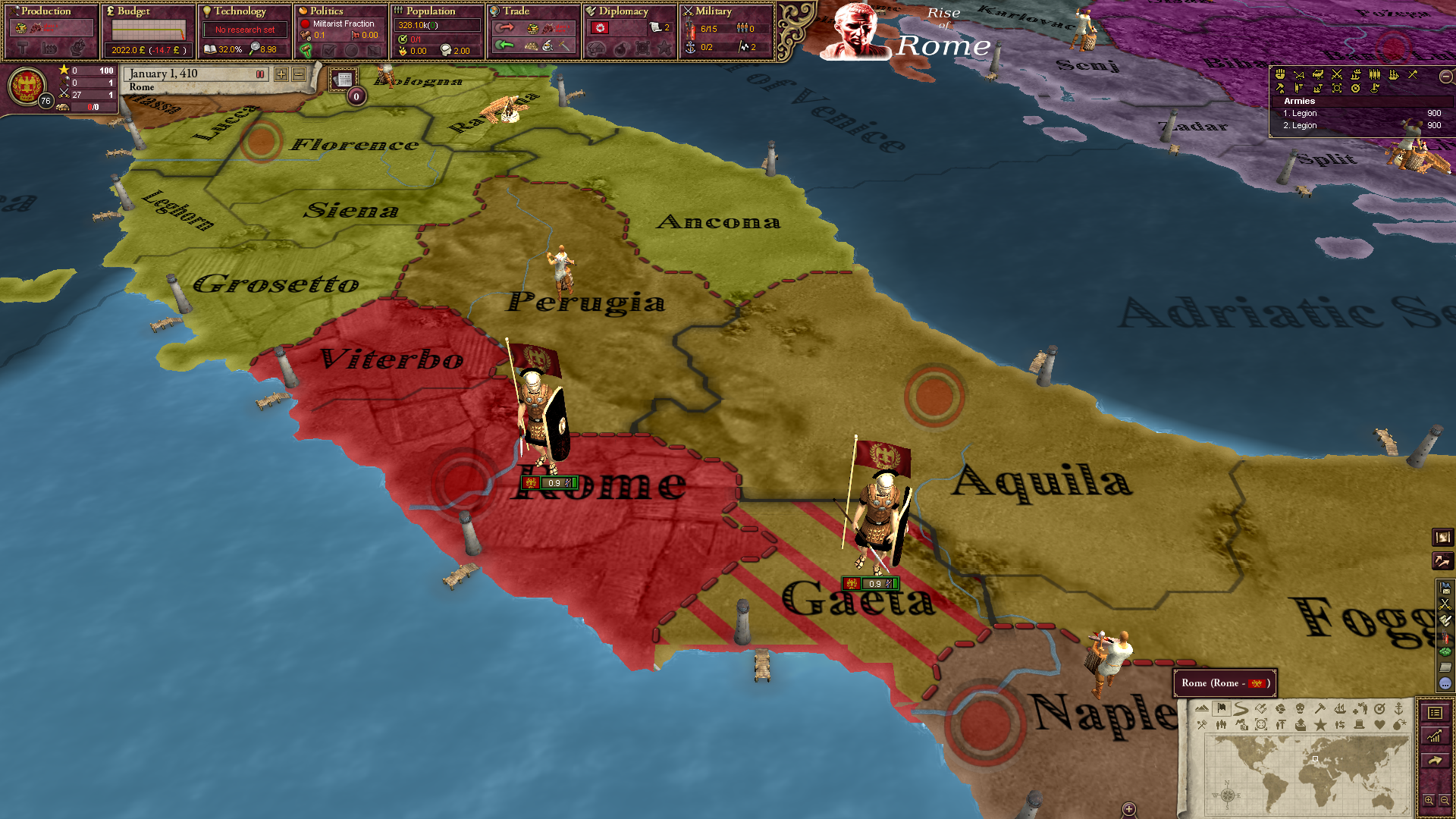 A example of a unit skin, I am unsure of the accuracy of this skin for some nations but would have most likely featured in the mod. 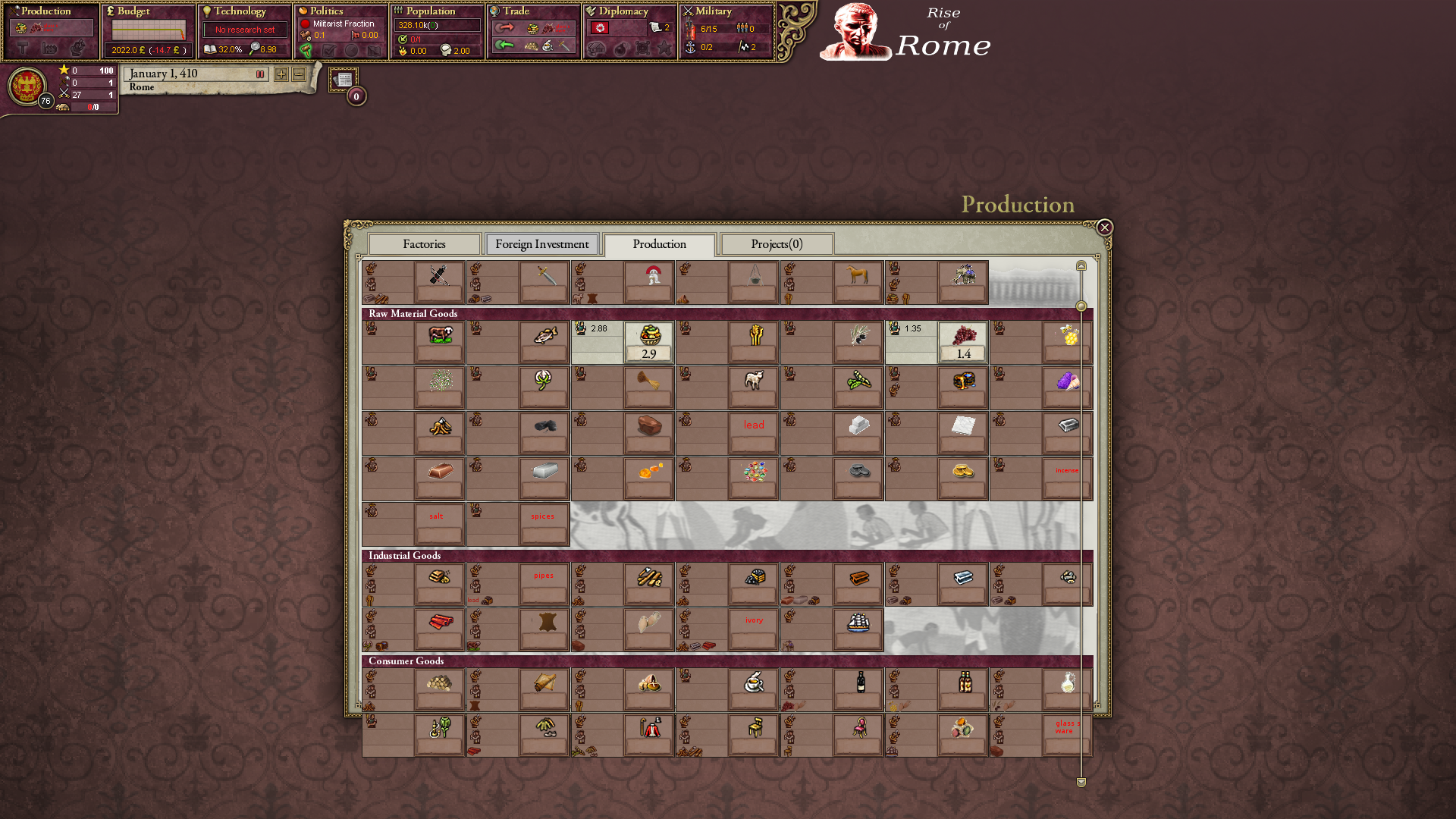 This image shows some of the new resources that would have featured in the mod, Note also that services are seen as a trade able commodity. This would have represented the sharing of labor and industry amoungst nations and also tied in with the concept of having multiple buildings other that just factories. This element would have been refined more prior to launch. 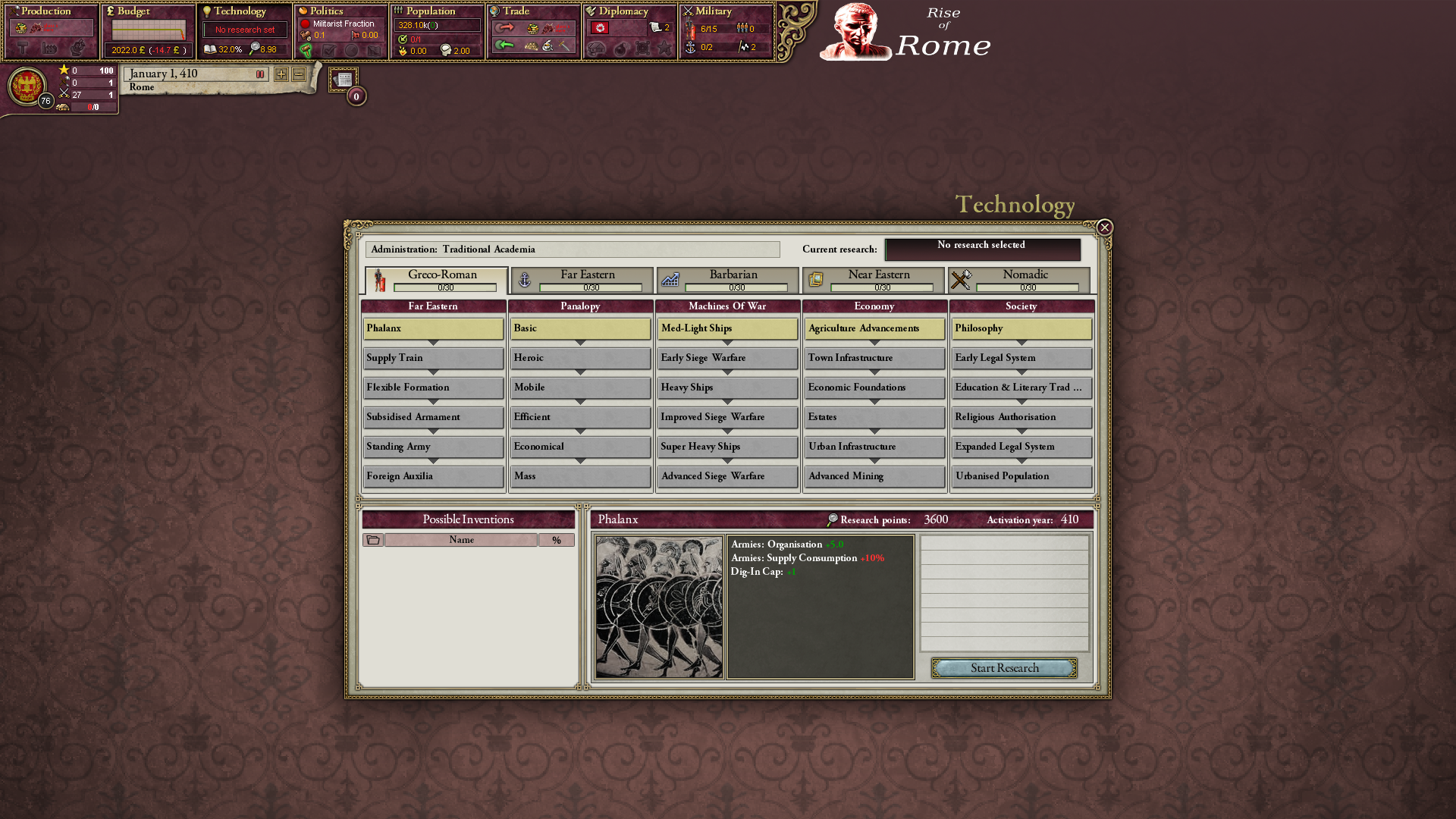 This image highlights how the tech system may have worked within the mod. This was a feature that I was unsure about, as I would have preferred a system in which more generic upgrades like say "Improved Armour" would be available and have different effects for different nations for balancing and a more diverse amount of innovations for all nations. 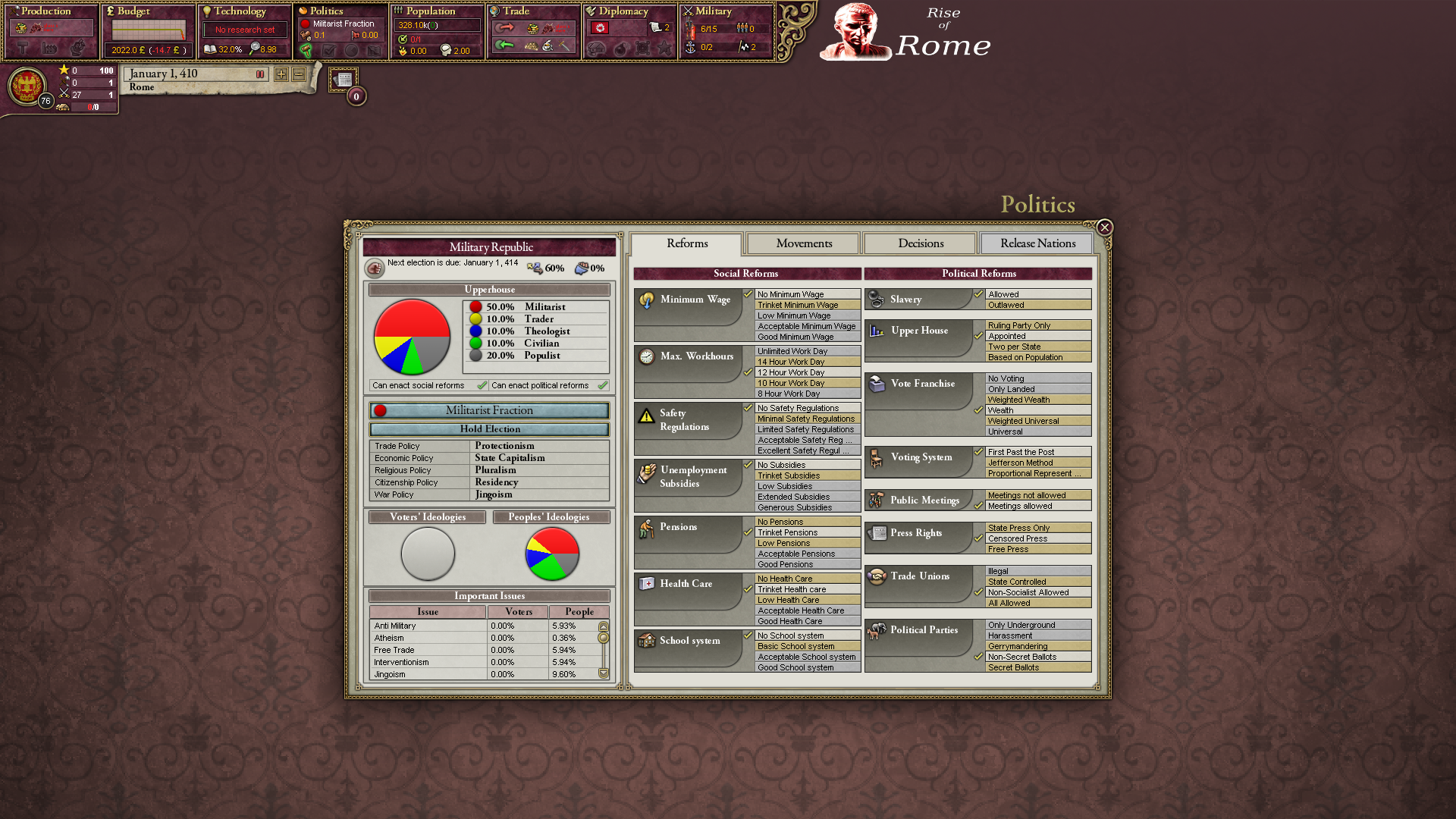 This image shows the political parties that would be present, and what ideas and groups they would support. This was something I didn't have focused plans for. 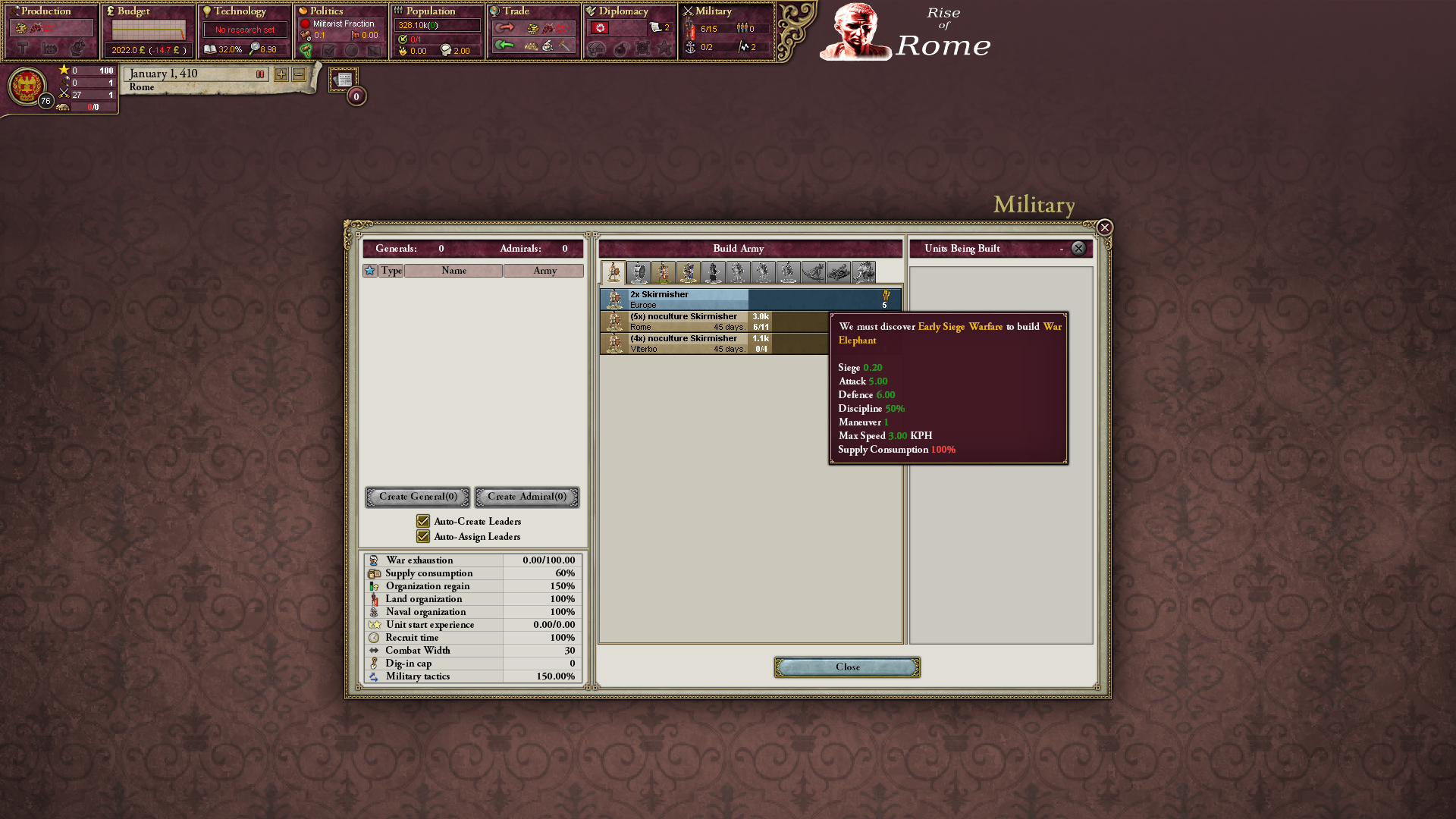 Here we see the possible unit options that would be available. The infrastructure for units that was originally in Rise of Rome mod is impressive and is not something I would change much, with the exception of regional buffs ie Cataphracts Represent. 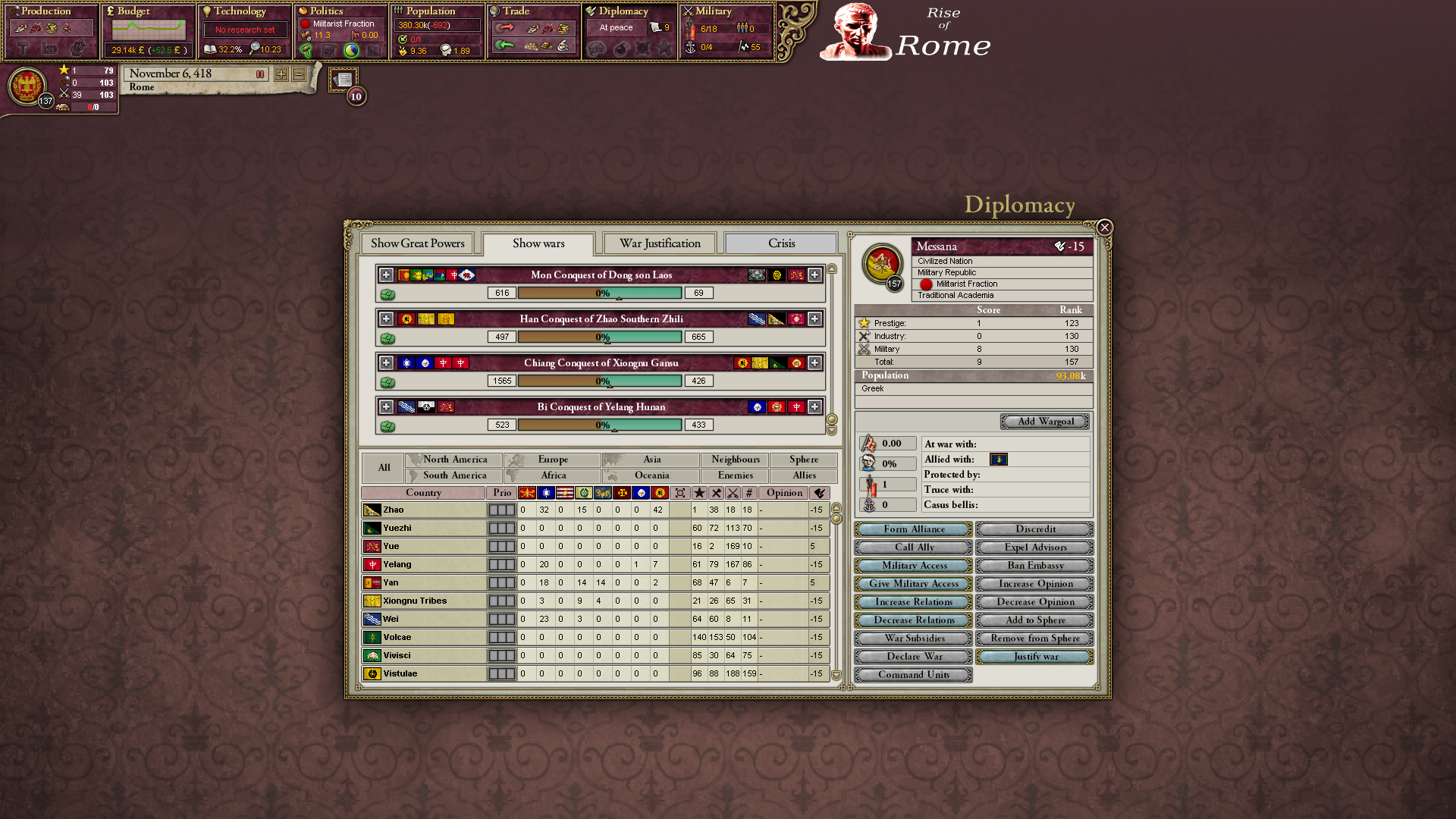 This final screenshot highlights the biggest problem with Rise of Rome as a base for RTV and the reason I basically gave up on the mod. Although the AI was more than happy to make alliances, Declare epic multi-state wars and raise an army The AI would, with the exception of Numidia (IDEK), never actually occupy/invade. Which basically lead to the AI spamming out wars and eventually losing due to time. The AI not understanding how to occupy is a insurmountable problem I cannot solve and kills any chance of the mod at this time..... unless

Given the mediocrity that is Imperitor Rome it is up to the modding community and community at large to fill this void. I believe that if some issues present in this mods current state could be resolved and with the support of other members of the community modders and otherwise this mod could work and be something great. That's why I'm calling out anyone this might be able to figure out this issue to contact me to try and work. I'm willing to give out relevant mod files if anyone thinks that might realistically be able to figure this out. Im also reconsidering restarting development if that can be resolved and if people still want this mod.

Look forward to everyone responses! :D

The fate of the mod. Its been a ridiculous amount of time since I first proposed this mod, I have been working on it and a few aspects have come along...

Let's start at the very beginning. A very good place to start.

Another update on the similar mod; the Victoria 2: Return to Antiquity mod. This mod is an activly devloped and better realisation of this idea. The head developer for this mod is Lucullus, while I am also involved. A discord link can be found here: Discord.gg

Hey small and unexpected update, This mod is very much dead however a new similar roman mod by another creator is being developed atm which I will link to here when they decide to release it!

i like the idea but i would liked more if you put some of the tribes in america
iroqueses,aztecas,mapuches,incas etc please keep doing this mod is gonna to be a very god one

when is it coming out?

plz help how do i install

McLeod in the High Castle Victoria 2: Heart of Darkness