After the defeat of the Soviet Union at the hands of the Allied Forces and with the Soviet Premier Alexander Romanov imprisoned whatever remains of the Soviet forces has been thrown into chaos. There is however one very talented commander who plans to overthrow the Allied occupants while the main army is busy fighting off Yuri's psychic legions... 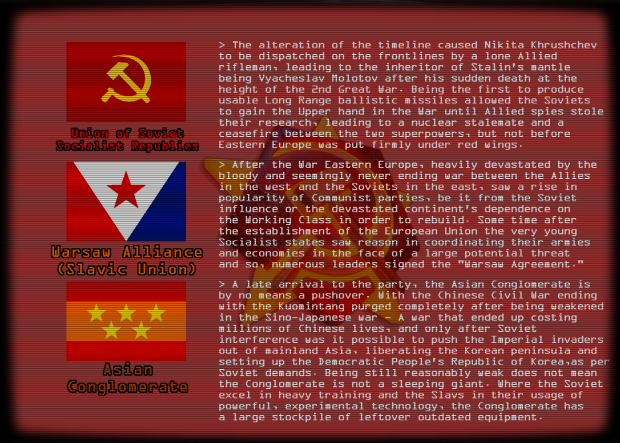 Yes, there is one for the Soviets too.

The USSR is a federative union of republics and autonomous oblasts with borders similar to the real life equivalent save for its European borders.

The Slavic Union (Officially the Warsaw Alliance) is a military and economic alliance formed by eastern european socialist nations, the entity itself has treaties and pacts with the USSR and while every nation is autonomous their armies function as one, resulting in their manpower not only rivaling that of their western adversaries but utilizing powerful but fragile experimental weaponry allows them to get the edge they need.

The Asian Conglomerate is similar but not quite the same as the Warsaw Alliance, while their main member, the People's Republic of China is recovering from not one but two wars they have just enough to keep an eye on the other members in case they attempt to cut ties with the massive republic. They at first rely on large amounts of outdated weaponry before bringing in advanced, deadly war machines.