Rebuild the Capital - A Brotherhood of Steel Expansion Mod

Rebuild the Capital is focused on expanding the Brotherhood of Steel and their role in the wasteland following the events of Broken Steel. Rather than sit on the sidelines after establishing dominance in the wasteland, the Brotherhood can spread across the Capital Wasteland under the guidance of the player. The Brotherhood can bring settlements under its protection and can build military installations in wastes and the D.C. ruins. The player can help rebuild Grayditch, establish more Brotherhood patrols, and turn Adam's Air Force Base into an impressive base for the Brotherhood of Steel. The mod also adds a large assortment of weapons, armors, and NPCs. The mod also features several new quests that deal with reunifying (or destroying) the Outcasts, finishing off the last of the Enclave, the relationship between Ghouls and the Brotherhood, and continuing the fight against the Super Mutant threat. Lastly, Rebuild the Capital includes a new recruitment system.

Here is guide that can be read online:
Pastebin.com

CHANGELOG FOR 2.0:
-Added content related to the Pitt.
+You can now conquer the Pitt in three different quests based on if you helped Ashur or Werhner. The third option involves Scourging the Pitt a second time.
+The conquest of the Pitt can end in 4 different ways, each ending unlocks its a new soldier that can be recruited.
+Added new quests, armors, and weapons.
+Added new player home in the Pitt.
-Added option to invest in Eyebot patrols and a new eyebot compainon named "Radio
-Added new base upgrade "Combat Smiths" which allows recruitment of new soldier type.
-Added option to invest in Arlington Library after completing quest "Wasteland Survival Guide"
-Added option to invest in Agatha's House after completing quest "Agatha's Song"
-Added new base upgrades that allow you to install remote access command terminal in player homes in Megaton and Tenpenny Towers
-Various bug fixes such as the fast travel bug at Castle Lyons

===========
INSTALL
===========
Rebuild the Capital requires all Fallout DLCs and requires that FOSE be installed.
In order to install the mod you can either:
A: Use any mod manager of your choice and extract as you would any other mod.
B: Extract the zipped folder and empty its contents into the Data folder located in your Fallout 3 directory.

JUST BE SURE THAT ARCHIVE INVALIDATION IS ACTIVATED or else the expected texture bugs will appear with armors this mod adds.

NOTE ON UPDATING:
1. Before updating, be sure to travel to a location that is not affected by Rebuild the Capital. I would recommend Craterside Supply.
2. Save your game then remove old version and hotfixes, and then install the new version of the mod.
3. When you reload your game, you should receive a message that says "Rebuild the Capital Updated!"


===========
BUGS AND OTHER KNOWN ISSUES
===========
-When taking the Vertibird to and from Adam’s Air Force Base, anyone following you may not appear. Entering a new cell or waiting an hour will cause them to appear and resume following you.
-Some weapons may have odd reload animations simply due to the restrictions will Fallout 3.
-There are probably a lot of grammar mistakes and misspelling throughout the mod given the large amount of text added through NPC dialogue, terminal descriptions, messages, and other things.
-After you have invested in the Pitt, do not fast travel when in the Pitt's Steelyard. Doing so will take you to the Pitt that does not have the Brotherhood. Simply travel back to the wastleland using the cart and when you return to the Pitt, the world space should be back to normal. If you see a Brotherhood symbol in the bottom left hand corner of your map, then it is safe to fast travel.
-If your game crashes when in the steel mill during the Second Scourge, simply use the console command killall when you enter.
-Wernher has a habit of not staying in the Pitt after he has won, and sometimes ends up spawning at random places. I think this is a vanilla bug.

-There may be other bugs that I am unaware of. Please feel free to report them. 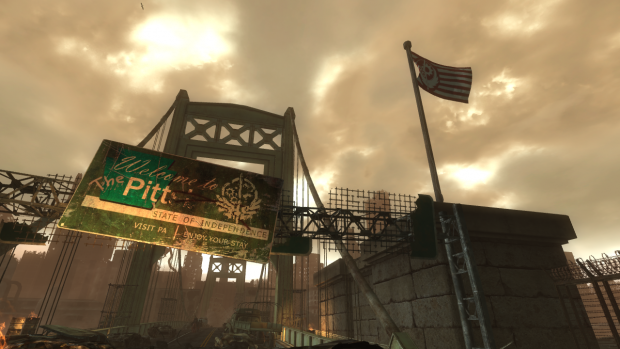 Mothership Zeta Crew (No resources used from the mod just an inspiration)
Nexusmods.com

Dogmeat and Other Textures
Nexusmods.com

Rebuild the Capital is focused on expanding the Brotherhood of Steel and their role in the wasteland following the events of Broken Steel. Rather than...

A small update that includes an assortment of bug fixes and small additions.

NOTE ON UPDATING: 1. Before updating, be sure to travel to a location that is not affected by Rebuild the Capital. I would recommend Craterside Supply...

Install esp to data folder after installing the main file.

NOTE ON UPDATING: 1. Before updating, be sure to travel to a location that is not affected by Rebuild the Capital. I would recommend Craterside Supply...

This is a hotpatch for some of the bugs reported so far. It should be safe to add to current save games. Simply drop the esp into your Fallout directory.

Updated hotfix for bugs that are reported so far. Extract to Fallout data folder.

Welcome To The Wasteland Fallout 3