R.E.A.R.M. - "Rearmament Expansion And Redesign Mod" is an unofficial Homeworld 2 expansion and it adds number of new interesting and various units.

-the vanilla campaign has been "REARMed" by adding new ships, research, and increasing the game's difficulty
-new game mode called "High Command" for large scale battles (WIP - serious crash issues, frequent saving recommended)
-system for naming your capital ships
-new Win condition option specifying which ships need to be destroyed in order to win the game (solves the problems when you needed to hunt down every last artillery frigate and similar ships with limited building capabilities)
-the "Explosion Damage Script v2.0" by Dim@ implemented. Optional, by default switched on. All exploding capital ships do damage to nearby units. (make sure your dying BC is surrounded by enemies or you guide it close to enemy ship yourself. Also don't scuttle your ships near your own units)
-new ally system
-new colored bay glows for faction ships (Hiigaran: yellow, bright purple. Vaygr: red, green. All for every possible ship with a bay)
-new "Capture the Mothership" Game type -MS with 500% health boost, unlimited capturers caps...
-some ships have custom visuals that can be "constructed" (Turanic Cruiser) and/or "unlocked" (Vay Chevron BC, 50 kills)
-unit caps info enlarged and moved to the top
-Hiigaran Defense Drone (ship model) finished
-Small Hyperspace Beacon finished
-Vgr Carrier armor finished, it will also give the ship the 10% health boost
-Significant revisions to ships created by others (Kadeshi, Turanic Raiders, Pulse Destroyer)
-added files allowing players to make a custom starting fleet, read installation instructions for more information
-new modules for Modular Destroyer (Defense Field Generator, Additional Engines)
-the "Queues" menu is bigger and contains 13 instead of 9 ships
-the Hgn Carrier and Battlecruiser team colors bug fixed (run the normal Homeworld 2, try bright red Hiigarans and look into the Corvette bay)
-the mod no longer uses duplicate models, which means the mod size and map load time has been decreased
-Modular Destroyer share health and speed upgrades with the default Destroyer
-view distance of standard mines significantly lowered, minefields are no longer visible from the other side of a map
-mines from the artillery cluster missile and minetrap now execute the open animation
-the artillery frigate turret light doesn't flash rapidly anymore, new NavLights in some subsystems
-"Naabal" changed to "Nabaal" in SP campaign mission 3 (which may not be correct according to HW1 documents, but in HW2 it seems to me that it's generally known as Nabaal)
-a lot of missing research fixed (for example faction ship wasn't affected by research etc.)
-new badges
-new menu backgrounds
-wallpapers and 12 new Windows icons of REARM ships
-lot of other things... 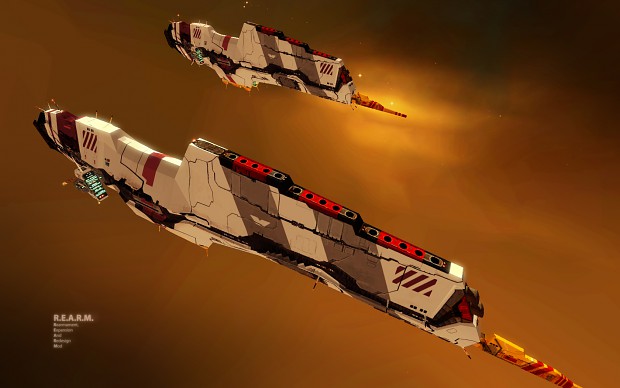 Thanks Aico for making the installer.

Thank you for making this mod!! =P

Heh, thank you for playing it. :) That's important too!

Thank you for thanking us for playing! :P

Hey! Is it possible to just extract the files which allow to rename in-game ships and put it in othe mods? Becaus ei love this features and that would be great if i could have it in all my mods! Thanks for the mod, great job :)

hi iam having a problem in misson 9 , it starts the repairs on the dreadnaught but when it reaches the 3 minutes mark the dreadnaught keep auto undocking from the Shipyeard naball and it doesnt stay and repair , what supposedly was 15 minutes of turture is now around 1hour of torture , any idea why ?

please does anyone know how to install this mod

This is an installer version, it can't get much easier than that (except for Desura). The only "problem" is that it requires the 1.1 patch.

when i install 1.1 it says i have outdated video drivers but 1.0 works fine. do you have any idea what could cause that?

its just normal really there is a way to turn it off but i forgot dude sorry i knew it had some patch with it to sort that problem out.

>Other Reason is that
} The computer is very good in hardware that the HW2 game wont recognise it because its to new and the HW2 Identifying system is too old and doesn't get updated so that's one big reason why.

I had that problem with my last Nvidia card, since I've been using a Radeon card the message stopped so I'd presume it just has problems detecting some cards properly.

it wont let me install the patch every time i try it says download failed to start, can you give a link to a site i can download it off of, i really want to play this mod, the 1.0 limits me SOO MUCH and i hate it.

In reply to my comment: got it to work found the patch this is the best mod yet love it.

You should have seen my face when I saw the Version 0.0.3c...Thank you for your efforts, thank you for bringing us that update. You did a truely amazing job. Hours of fun ahead for my bros and me.

awesome mod thanks for making it

In your description, "the vanilla campaign has been "REARMed" by adding new ships, research, and increasing the game's difficulty." What is the "vanilla campaign"?

The Vanilla Campaign is the campaign the game comes with.

It might be reduced because of a small fire delay of the second beam. But that single solution makes more sense and I think looks better, clearer. It also keeps impression of the BC turret as being superior, as it should.

DL'ed the mod, won't work, uninstaller not wanting to work either ...

does this MOD fix the sub faction (such as HGN high-tech sub faction, VGR missile sub faction) selection? when I play previous version, no matter what sub faction I choose, the units are the same as the original race.

by the way, the installer version does not have the uninstall application. please fix it.

Are you really sure you turned the factions on? Anyway, I don't remember it to be broken, so yes it does work.

Every other mod does it the other way around, so why not...
But don't worry, Hiigarans will get their units too. Also the Micro race is by far not finished either.

damn it's an amazing mod!!!

Yes I did and still do.

many bugs in this version, one of them is the research station, no color, bad dock system etc. and what about the new race? one of the ships can´t support fighters inside for more than 2s and the other one,well, small units get trought it Loll?!?! anyway i give u coongratulations with the great work with the other race and the missile battlecruiser, looking and performing amazing :D

Absolutelly anywhere, in the readme file, in the short description just right above this download, or even on a comment on the main page sent exactly 4 hours before yours, everywhere where it's mentioned you can read that all those things you've named are work in progress.

The delay and waiting for the next version was getting way too long, so I've decided to release earlier and risk that people won't read what isn't finished yet.

First of all: This mod is amazing!! Thanks for all the effort!

One tiny little thing: It might seem a little strange that anyone even noticed this but, if you look at the rear engines on the original ships, for example the normal Hgn carrier, you'll notice that the back part of the engine is slightly sunk in giving the engine a more 3D look, but on the new ships like the Hgn supercarrier the back part is flush with the edge of the engine (I'm talking about the individual engine tubes). I know it's a small detail but for me that's what makes all the difference.

There is a glitch with the resources and construction / research. If your building or researching, itll stop and when you cancel it will clear all of your resources.

Glitch only happens when you turn the RU Injection on.

This has been reported.

Ooh sorry i didnt see it in the comments.

No, I'm just saying. It wasn't talked about very often, in comparison to the second bug in the comment under you, which was reported over and over and over...

Installed the mod after downloading the latest patch, worked, opened.
Changed the video settings to high, pressed apply, and it just Killed itself, wont startback up now. =/

Reply to my own comment:
nvmd, got it to work after spaming that execute button
But theres another problem.

The "Clock Speed" option has been replaced by something, so everything lags or moves at like, 2-3fps
Any chance you can put that back in? This seems like one hell of a mod but if something like that bugs me than i just cant play it... =/

"Clock speed" wasn't replaced by anything. There's simply a game element which makes it laggy. It has been reported so many times and discussed over and over, that I have to controll myself to stay calm every time someone mention that. This is a thing that not me, nor my testers experienced before the release, so it was discovered only after people's reports. Some computers can't handle it and have problems with it and judging by your 2-3 fps your computer has serious problems.
Good news is that the cause is thraced now and it will be fixed in the next release.

Sorry about that then'
And thanks

Thanks for that update. I experienced the same thing.

Hey, just found this mod- not finished DLing yet, but I wanted to say how glad I am to find an active HW2 community at moddb, and I appreciate that you included in REARM the ability to turn off mod features and were conscientious about keeping HW2's original balance intact. Too many terrific mods nevertheless get tiresome because they aren't as finely tuned as the original, and then you have to reinstall to clean out the mod files. I look forward to checking this out!

I've downloaded this and tried to play a vs. cpu match but when it completes loading up the game it just closes right there. Campaign works though but I've like to see what this mod has to offer. I tried vs. cpu on unmodded Homeworld 2 and that works just fine.

Not a bug, you need a 1.1 patch which you most likely don't have.

I would download this but my internet is downloading at 20 kb/s a second i have to wait a week or somthing for it to fix i hope that this mod is awsome and i cant wait to get it :D

Also could you make a .big file for this mod or have i just missed it?

There is a .big file version.

Apologies first.
I love REARM, especially the new armed refineries; however I'm looking at how to edit basic ship stats/speed etc. (ie- looking to replace the Destroyer front torpedoes with Hig Torpedo Frigate's torpedoes).
If I need a basic editing program can anyone point me in that direction?
Thank you gentlemen.

You'll find any modding tools you need on the Forums.relicnews.com

Man, ive been tracking this mod for quite some time, and I got to say, this is probly one of my favorite mods. Doing good mate. Keep up the work1