Project 7928 is a mod where the neighbor and player have been turned into robotic versions of themselves. And the neighbor has constructed a very very large house! Held up by only elevators (one real) And he has something that belongs to somebody...

Thanks for voting and helping Project 7928 on it's quest to become the 2021 Mod of the Year. You are now in with a chance to score some free games from our #modlove collection. Help this mod secure more votes by embedding the widget (or link) we have included below on your favorite sites.

Project 7928 is a mod where there is a robotic neighbor.

And this neighbor has has a really big house. And it has SECRETS in the basement. What he hides down there is hidden for good. That basement is REALLY BIG TOO. So its your job, the Robotic Player to break down there and find the SECRETS. But there are like 6 locks, some boards, a gate, and 3 terminals. So there is almost NO CHANCE of getting down there. But you, the player is determined to get down there and find those SECRETS.

THE MOD IS FINALLY FINISHED! Over a years worth of work paid off. And it's done! 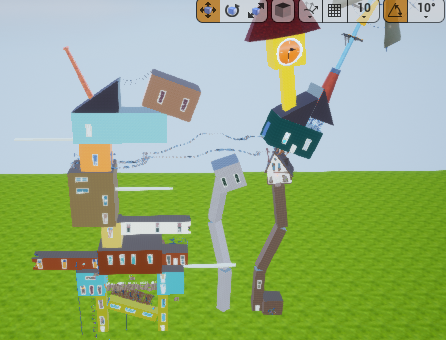 that up there is the house in its current form. It has yet to have its puzzles in it. But its making way!

More about each room:

the house is held up in 3 locations, all of those being "Elevators" (they really are just tall structures with ladders.) At the main part of the house there is a elevator on its side. at the top of the elevators there are the kitchen and the living room. And a bridge connecting them. Above that there is the bedroom, some random room, and a hallway. Above THAT is the bathroom. And another random hallway. then all the rooms after that? i don't know. I have not decided what will go up there. BUT there is two rooms up there which i do know what are in. The train rooms. the room on top of that house has the train. the other room has nothing but a rail so far. Also at the top of the house there is a clock tower! (And a windmill. But who likes windmills?) Don't ask me what else will go in the house so far.

Also the basement has, lets see, LOADS of locks. 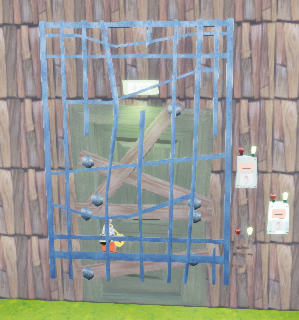 ah yes, 6 locks, 3 terminals, some boards, AND a gate! Goodness thats alot, The items will be hidden in clever, out of the way spots. The good thing about the house being so large is that the items will be hard to find. because there is so many rooms to look through. I bet that you cant finish this mod in one day if you dont know where anything is. So with that said, lets look at the CHARACTERS! 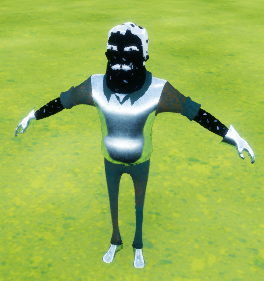 what i meant was he jumps from ground all the way into his house. More news to come!'

Well the neighbor has a yard now! With a very broken apart Act 1 house, because he lived in that house, he just burnt it and left it and built around it.

He also has a huge fence around his home!

and a working elevator. Only he cant use it. Oh yeah there is also a new room in the house.

He has a load of bushes. some you can hide in like in Hello Neighbor Hide and Seek. and uhh, there are lots of easter eggs to other hello neighbor builds like alpha 1 and pre alpha.

FINALLY. The full version of Project 7928 is HERE!! Project 7928 has been in development for over a year with no demo builds. But i finally finished it...

This looks AWESOME!!!! Oh my gosh I am SUPER excited to play this!!!! Keep up the good work! I'm excited for when it gets released! Does the player get any special powers? By the way, if you already released files, I can't access them. Can't wait to play this!

Hey, The mod is done. The player kinda gets special powers... He doesn't die from fall damage.

Don't worry, there are no files yet to access. But there will be some soon!