The Redwood Nation
The Perisno Elves. The best archers in Perisno.
The Redwood Elves have been in Perisno for a long time. Their name comes from the forests they live in, which have red bark. They are a very mysterious faction and not much is known about them from other Perisnoans. The closest associations Perisnoans have had with them are the Tolranians, who fought along with the Redwood Elves to defeat a massive Hakkon army that invaded around the year 332. In a famous battle, called the Battle of Halfith, a combined Tolranian-Redwood force defeated the Hakkon. At that battle, the Tolranians discovered exactly how strong the Elven archers were, as they were the only reason because of which they managed to defeat the Hakkon army. They had fired volley after volley at the Hakkon Legionnaires and when they tried to send in the lancers, they were outfought by the Tolranian horse archers. After routing the Hakkon, the Redwoodians went back into a reclusive nation and eventually broke off good relations with the Tolranians. Forty years later has them fighting a bitter war against each other for reasons that are not clear.
Currently, the Redwood Nation is ruled by Queen Arlina. It is not strange for women to have high positions of power in the Elven hierarchy and some of the most famous Redwood rulers were in fact Queens. However, times are changing in the Redwood Nation and there are some, including the claimant, that believe men should rule.
The Bluewood Elves:
The Bluewood Elves are an offshoot of the Redwood that inhabit a small peninsula below the capital, Forniron. They are a strange group and no one knows exactly the reason of their split. Some say it was because of a civil war, others say it was because of the Bluewoods being a completely different species of Elves who felt they were the minority. Whatever the cause is, the two factions detest each other and to this day, Bluewood patrols continue to plague the Redwood elves near Forniron. It is rumored that the Queen hates the Bluewoods especially, and one day plan to rid of them once and for all.
*Note:The Redwood Nation is the most mysterious faction other than the Reich and the player would have to delve in game to learn more about their lore.
Troop Tree 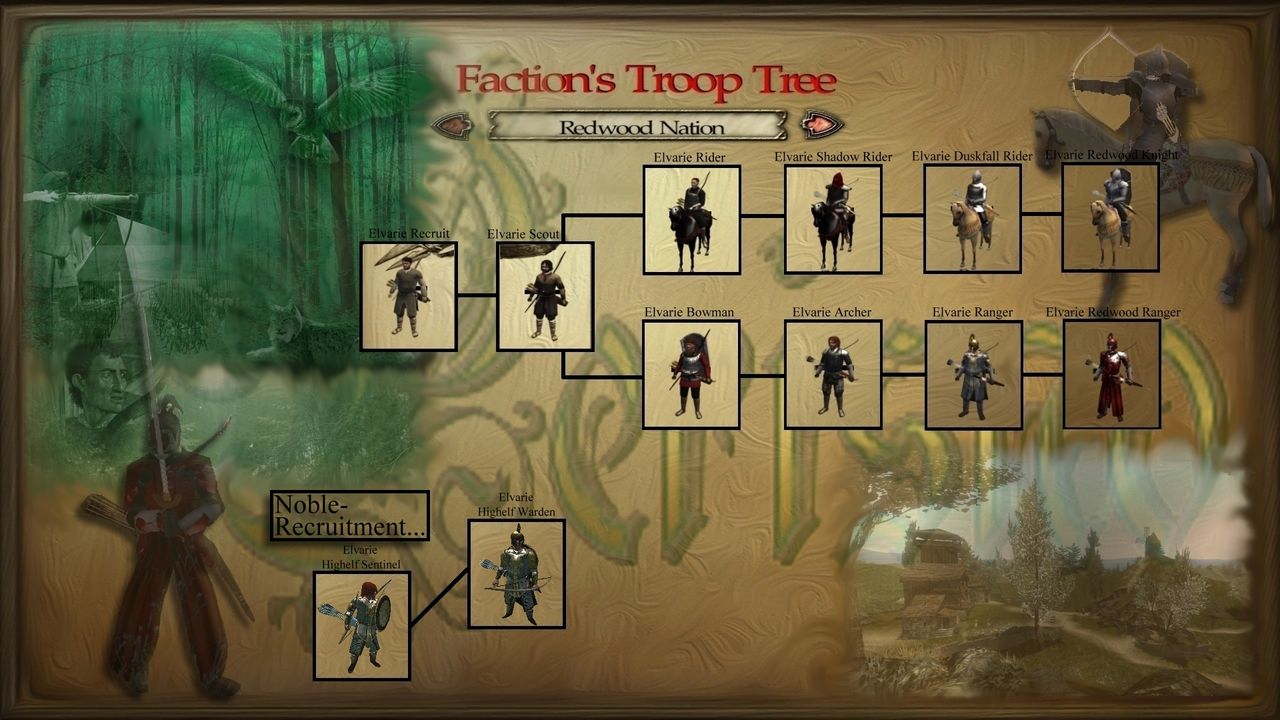 I LOVE THE REDWOOD! I love the bows,and making them line up in 1 long line annihilating everything coming their way,then I,will all their horse archers,outflank enemy archers and infantry.

Well,I never really got the chance to attack a large group of Maccavian Axebows before I put up that comment. Now that I did,I agree with you.

Does the enemy form wedges?

When I get into battle with another lord, their cavalry instantly charges in a straight line and try to punch through the enemy lines so its somehow a wedge, or the idea of it at least

Bluewood Elves are my favorite.I rely hope they make them a faction and you can join them.