Perfect Dark - The Ancient Pathways is a very
ambitious Far Cry total conversion. It seeks to
recreate the entire singleplayer storyline from
the N64 original, but with the difference that the
storyline will now be far less linear: players can
kill any NPC they wish, affecting the ultimate
outcome drastically.
There will be less 'rails' so to speak. And
Perfect Dark players will no longer be victim
of 'golden bullet' effects, such as Cassandra's
unpreventable death. Nor will they be forced to
kill any single NPC, nor will they have to refuse
Datadyne's offer of employment.
Yes, that is insanely ambitious for a Far Cry
mod with a team numbering at ONE person. But there
are actually no foreseeable difficulties in Robert-33
creating rough drafts of most of Perfect Dark's maps
without creating new content such as models, etc.,
because P.D.'s maps are very geometrically simple,
and textures dumped from the N64 game are being used
as temps whilst being slowly replaced with higher
quality imitations.
Progress is slow, mainly because CryEngine has
certain quirks which prevent it behaving like an
N64 game, especially in the area of visual effects.
(The Carrington Institute ground floor's
transparency effects still not fully correct
- see screens.)
Naturally, help would be appreciated, but
anyone wanting to join the team must be willing
to put up with Robert-33's personality, ideology,
and artistic choices, along with a communication
turnaround averaging 10 days.

(Don't take that lightly: opinions of Robert-33
include 'idiot who needs to get a life', along with
more positive, 'awesome' and 'like white on rice'.
Oh, and Robert-33's the one who once took two years
and seventy-four days to respond to an email.) 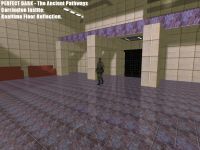 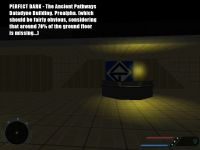 This HAS to be finished and released! >:U

I want to see this Alive

Well, there goes my idea for doing this on Cryengine2... :P

Though, mine would more have been about recreating it exactly, then redoing parts of it to make it more open....

oh my god! I loved perfect dark, I will track this mod, but I hope gameplay remains like farcrys, perfect dark is fun to play, but that was with an N64 controller, not a mouse and keyboard. Good work, and dont let this mod die!

looks pretty cool but where do i download it

OMGWTF ARE YOU NEW?
the mod says TBD, that means it isnt out yet :P

Its like N64 version :).It will be nice if you change the look of this mod.Just improve things...