Painkeep v3 - Blast your opponents with 3 times the Pain. Deathmatch mod - make other players "die." Disclaimer - this is a free product with no warranty - see disclaimer.txt for details. Number Six - welcome to the village.

Yes, surely, 3 times the PaiИ!
And I did call you surely! 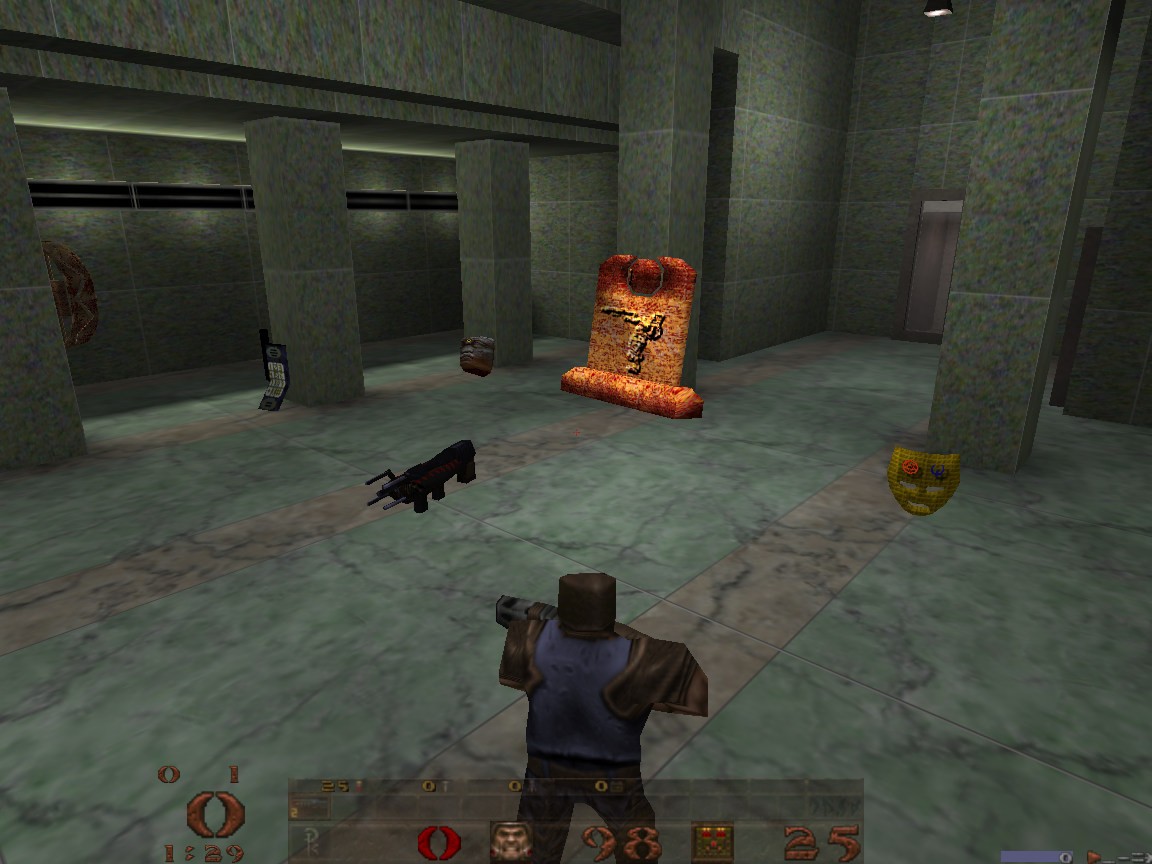 The artifact and convenience pack updates added more
maps and new hubs to play from. These are some of the best
DM maps I have ever played on.

I know a few hard core quakers believe this is one of
the best DM mods ever released. How do you improve
that? 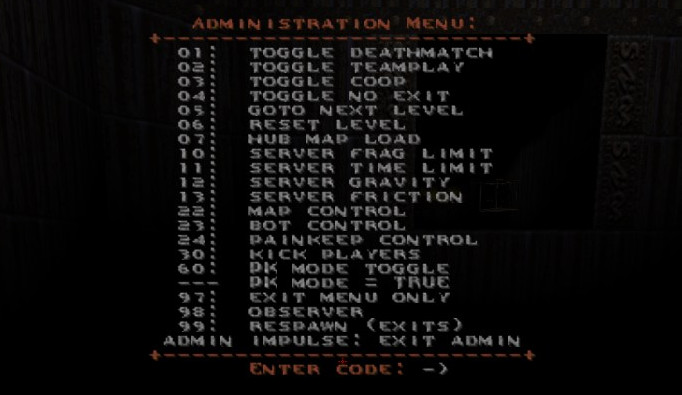 Version 1.2 added a menu admin system that beat the
old collection of impulses with a spikey stick.
Also includes both updates support, all 3 hubs and new maps.
Previous releases name every hub start.bsp thus making
them incompatible. And the ability to have painkeep
throwables and weps on any DM map. 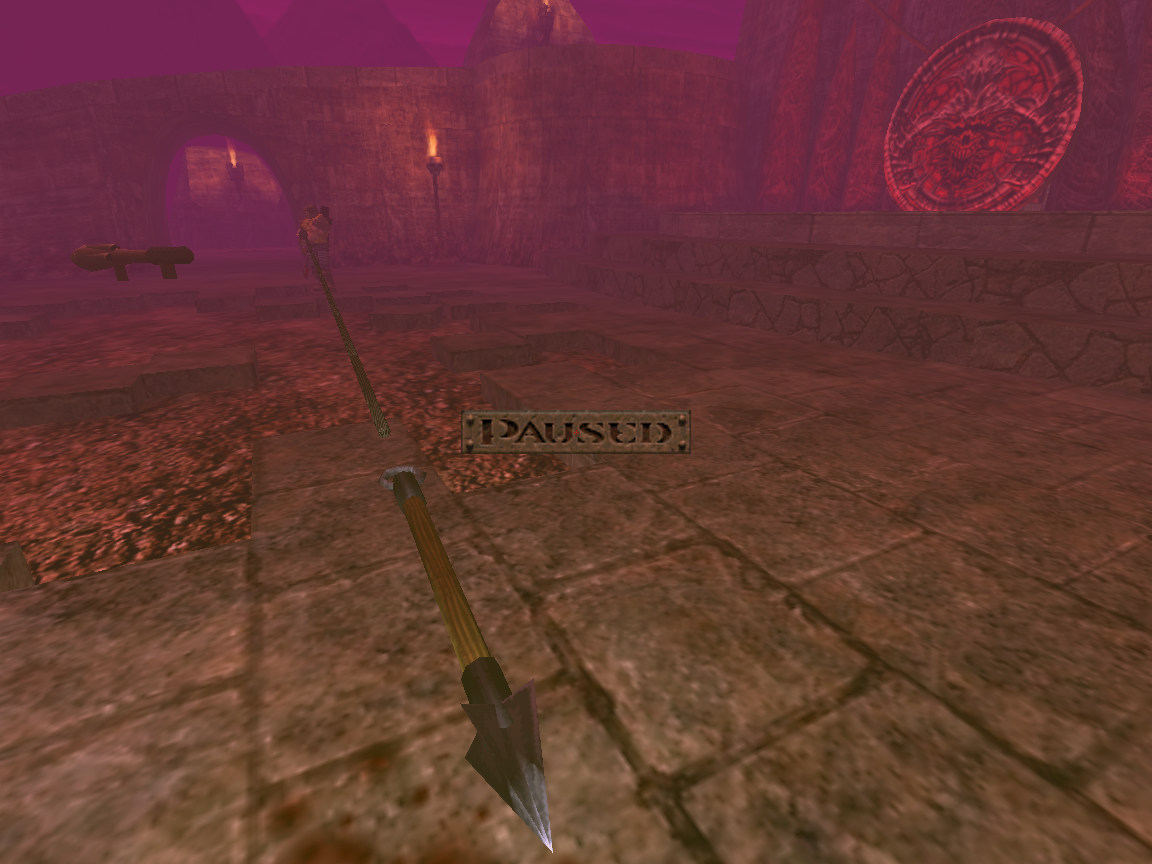 Version 2.0 was the code base used for the Archon mod.
Since finding a server to play your favorite quake stuff
is most challenging these days - I added 2 kinds of bots.
And then taught them to use pk items. Visible weapons
(include pk stuff) and a chasecam in the mix. Support
for quake 3 maps via darkplaces engine. 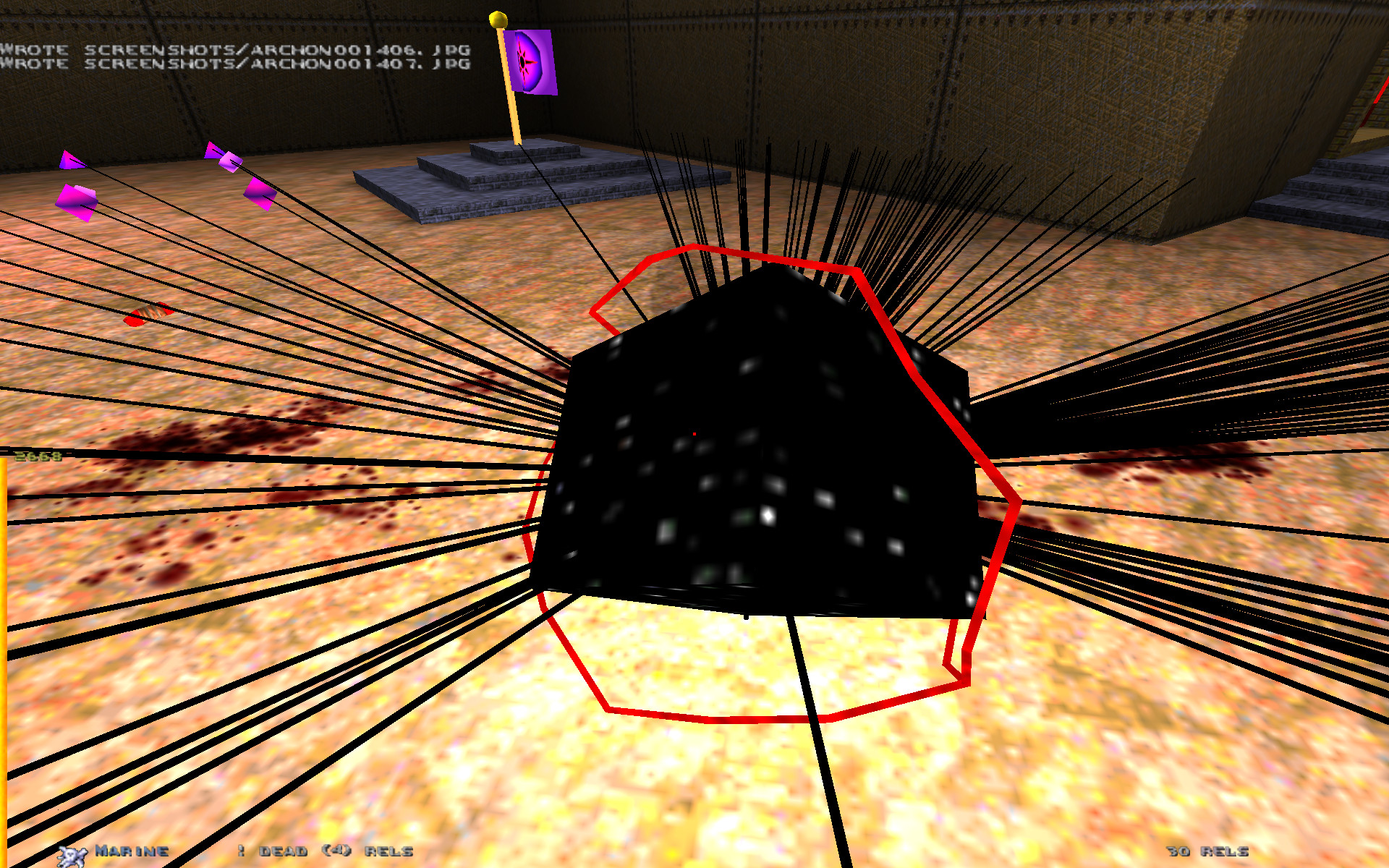 fig 6. version 3.0 testing the LASERS of the "Super" Gravity Well

Version 3.0 sort of snuck into the Archon mod mark II
code base. It started with server var controls for the
operation of the throwables. I started with an extended
mode for beartrap and autosentry live times. Then I
made an extreme mode where they hang around a lot longer.
And the "Super" Gravity Well. Sucks longer, harder and nastier.
Did I mention that it fires lasers at stuff it cant pull in?

Once you get bored with standard DM features, adding
rune server support is a decent way to extend play.
The double rune set premiered in q2 lithium server has
a considerable strategy bump over the original runes. 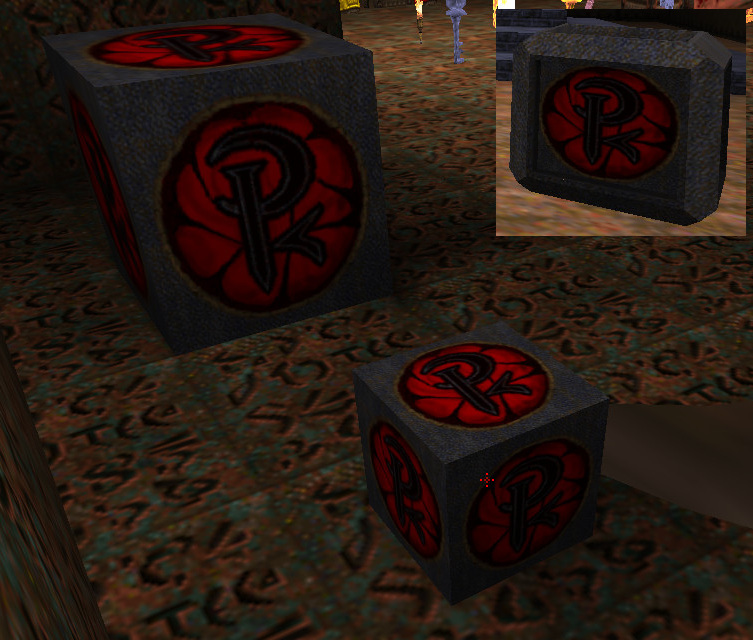 Add some non-q1 weapons as swaps or temp items for a new flavor.
Care has to be taken for weapon balance, so these new weps are
not permanent. They come in the flavor of random results from
pk cubes or crates. New goody boxes that need to be opened.
The cubes can be traps, so there is some risk with the rewards.
Items like railguns, hyperblasters and bfgs are limited as
well by ammo available. 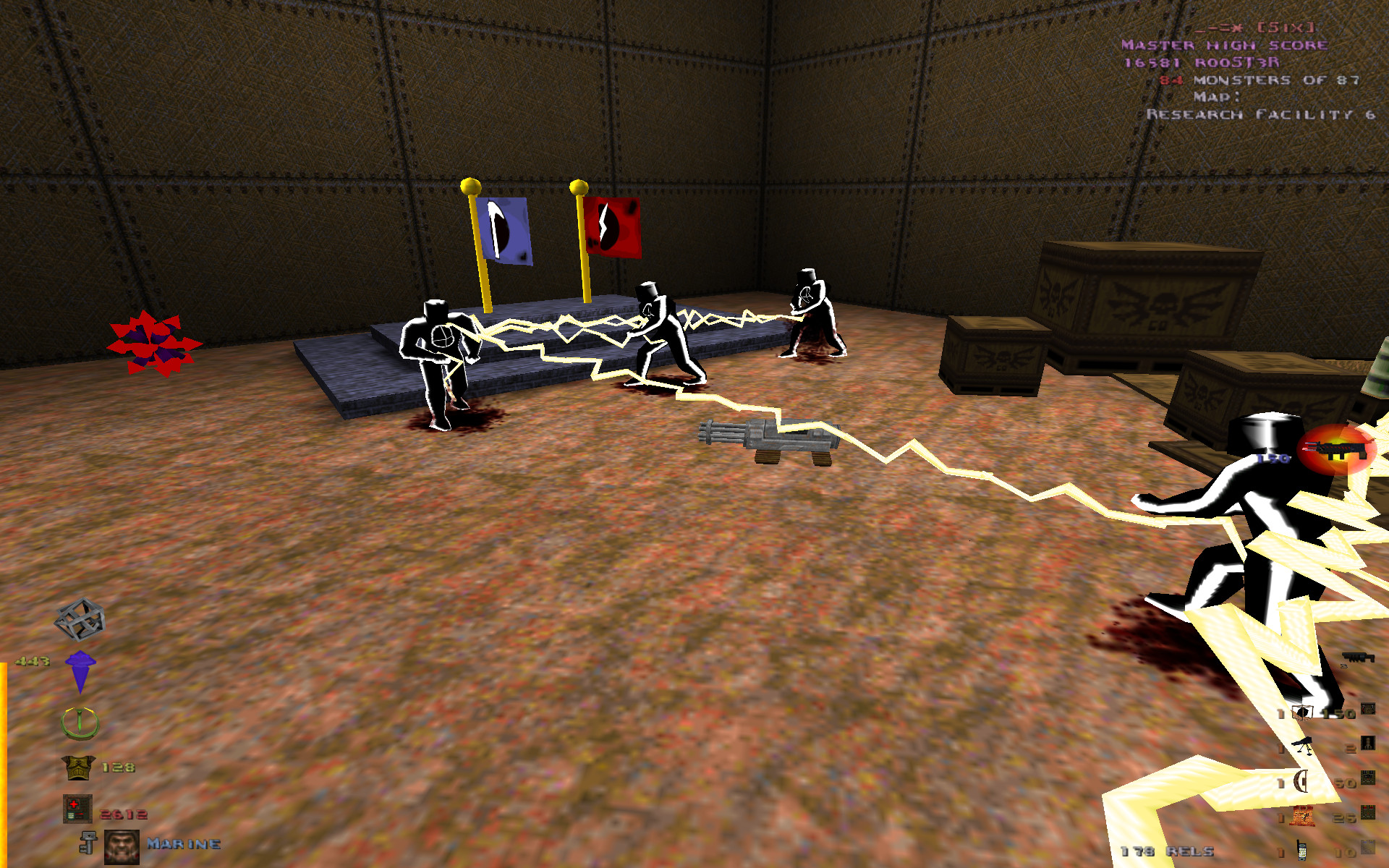 A few years back I took a look at making 3.0 a new PK
release. And killed the idea. Too much trouble trying
to extract the code buried so deeply in the Archon mod.

Then I ran into a problem with Archon. The code was
getting so complex I bombed the frikqcc compiler. I
used more than 32768 globals! After research I
switched to fteqcc. There was still an issue.
Many features were not done on the Archon slate, and I
still had a ton of globals.

After much soul searching and a bunch more research of
darkplaces extensions allowing string manipulation -
I decided to do a major recode. The main point being
able to do mucho weapon, monster and morph manipulation
without tons of globals or even more code changes. 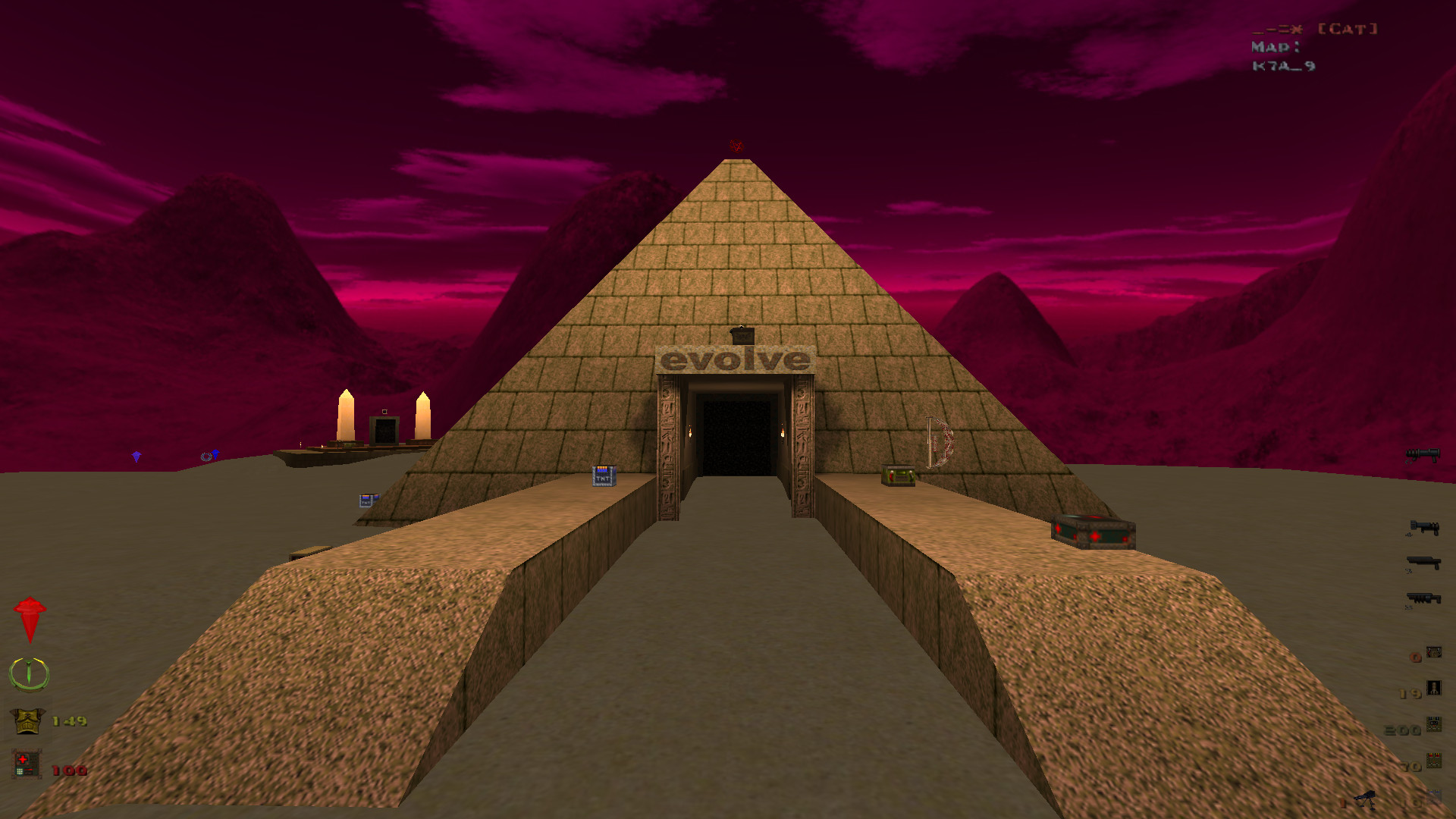 Next will be some throwable item operation bumps.
More Quake-Hack random build DM maps will be added.
Helper monsters were in Archon. I might add those.
Also possibilities are CTF, KOTH, and other capture
modes.

I'll run server tests with the bots prior to release.

My main mission with 3.0 is to keep the original flavor
but add fresh play modes that keep it exciting.

Well penned article by James Long details much about the quest for better Quake C!

"the Archons" - where is it? This is the coming 1.2 beta release update!

EXTRA EXTRA EXTRA! The beta release of Painkeep v2.0 is available for quake players and the moddb community. Get it while its hot.

I'm looking forward to the release. Hoping that a dedicated server will be running it too! I would love to see old faces again. -HaCkMaStEr aka Cutchyuz

I have some new ideas that I hope to squeeze in sometime this year
A new map system is in dev. that produces a "randomized" map design from chunk elements I call hacks

Some few issues with the system need fixed before I can release the new maps - they look very similar to old maps, just that you can play a map many more times before it becomes familiar and less interesting

And make sure you _always_ take a towel with you...

Not much has happened with pk 3.0 in the last year
I got bogged down with testing the other mod, then life attacked and I lost track

I'm back now, but I need to run some tests and do research to find out where the pk 3 update is

I'll be posting updates in the forum & on profile pages

There is a bug fix progs.dat - want to do some more testing.
And maybe a pak file update, I need to check on that.

Seems I added a bug where touching a weapon
you already have produces no pickup sound.
It also removes the weapon. Permanently.

So I created a new mode of play - weapons
slowly leave the map.

Fix is already in the code base I just have
to decide how I'm releasing the update.

We are very excited about this! Hopefully anytime now!

The question: can PainKeep 3 be released in March?

Much depends on the current testing.
I have a feeling I'll be tweaking a few cfg scripts
and looking for missing models.

Blasting Over It Quake