Natus ob Imperium is a global mod focused on antiquity. In fact it's an independent, unique game based on the MTW2K engine. The game has plenty of unique features such as exclusive graphics (which takes into account the specifics of the warriors and geography) and original gameplay.
Player will be able to become aleader of one of 28 antique factions from the Great Rome to theMaurya Empire! Each faction has its own gameplay that will make the game much more challenging. All factions are interesting to play and every campaign will run its own way.
There will be detailed and huge campaign map which boasts many features, from navigable rivers to beautiful textures, landscapes, and new detailed historical models. 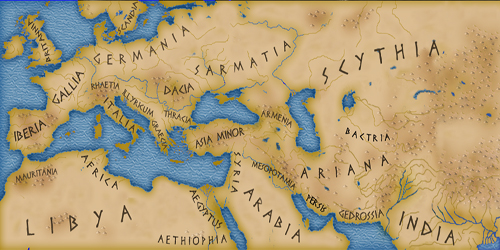 Some factions, such as Tylis (Thrace), Pontus, Bactria, Saka, can change
their cultural types. There must be coincidence of some factors which took
place in history to gain that.

There are 10 cultural types in the game:

The territories are divided into colonies (client poleis) and poleis. Features of the settlement depend on its type: the barbarians begin having only colonies; the ability to transition to the poleis will be available only in the case of the proclamation of the kingdom and breaking with the barbaric traditions of the tribe.

The provinces with the status of the polis allow the player to set the level of taxation and provide an opportunity to recruit the elite troops. They develop slowly and may reach the level of metropolis. The big city allows buildings of a new level, from the administration and to commercial and military buildings.

The events and gameplay:

The historical events in the campaign are divided into:
1) Informative ones.
2) Events causing some effects on the player. They concern a particular faction and include laws, reforms, diplomatic events, and etc. It will allow the player to feel more deeply the historical spirit of the game.
3) The tasks that the player must fulfill within a certain time. For example, there is the
task for Rome incoming after the decision of the Senate (on the proposal of
Scipio) to start military operations in the territory of Carthage. Fulfilling
such a task, the player receives some historical bonuses. In that case, they
are:
- Carthage turns into the Roman vassal,
- the Iberian (Spanish) territories under the Carthaginian rule become Roman,
- Carthage pays to Rome 200 sesterces per turn during 50 turns.
- if Carthage starts the war with some other factions it has to ask for permission from the
Roman Senate. The player (Rome) receives the request to allow or disallow
Carthage such an action. In case of your refusal, the Third Punic War begins.

In addition to historical events, there are events which have some historical background but aren't referred to the foregoing ones. For instance, there are the probabilistic events depending on the situation in the country, the player's behavior, and etc. Such events affect the situation in the player's country, provide various bonuses or penalties, open locked features for a leader which develop traits and retinue.

The unique buildings and the wonders of the world

There are several wonders of the world. Capturing them, the player receives bonuses affecting the entire faction. There are also unique buildings providing some bonuses to certain local factions.

The features of the gameplay

Playing for each faction is unique. Even after two campaigns for the same faction, the game can run in a different way. For example, you can choose the game style of a tyrant or a liberal (there is the term "popularis" for that). Also, the player can study technologies. This process has the form of bills (at its core, each bill has a historical fact). The new technology faces the player with a choice between two opposite branches of development.
For example, the country can take the line of the least resistance and get some cheap buildings. Or it can go the other way and get the cultural growth bonus. The storyline will change depending on the choice of the player.

Having played Natus ob Imperium, you won't only be able to feel deeply the historical nuances of the ancient world such as diplomatic attacks, wars, alliances, and etc.
Also, you will be able to lead the armies in some historical battles, and to get acquainted with such geniuses of military science as Hannibal, Caesar, Mithridates, Vercingetorix, and many others.

Special thanks to the teams of mods for permission to use some of their work in our mod.

I can't even install the mod properly, I literally have to make a new account and give them my phone number just to install this mod

Will be released in english?