"Myth: Total War" is a conversion for Medieval 2: Total War Kingdoms inspired on BUNGIE's cult classic game "Myth - The Fallen Lords" from 1997 and it's sequels: "Myth 2: Soulblighter" plus it's official expansion "Chimaera" , and MUMBO JUMBO's "Myth 3: The Wolf Age".

As you play, you can either join the combined allied forces from the Legion as they desperately try to survive after decades of war, or control the massive dark armies from the conflictive Fallen Lords to decimate mankind and erase every trace of civilization.

-Experience the recreation of the intense epic battles from the game campaigns or create your own skirmishes.
-Explore the rich, immersive and complex lore from the saga and it's expanded universe.
-Control nearly ALL units seen on the games and visit every known location from the world of Myth, painfully recreated to the very last detail.
-Make the most of your tactics and strategic abilities to last the carnage and endure the conflict.

After nearly two years in development, the first beta for "Myth: Total War" is now ready to be released.
"Myth: Total War" is not just a MUST-PLAY for every Myth fan, but for every Tactical and Strategic gamer.Moreover, it's a whole recreation of the unique world and lore inspired from the Myth franchise.Painfully and strictly designed units, with unique sets of animations and abilities inspired on the three official games, their videos and amazing concept art pieces.
The early Beta will consist on skirmish battles, focused on the final year of the Great War period, and the war against Soulblighter, sixty years after.

A full campaign is now on development.

Control the combined allied armies of the light with the humans from the Western cities, the deadly fir'Bolg from the Ermine, the brave Dwarven Nations and the fierce Berserk clans from the North. Take the Journeymen from the old Empire into battle or unleash them as the mighty Heron Guards. Send the huge forest giants to break the enemy formations.

In "Myth: Total War" you can also play as the Fallen Lords factions, individually: Soulblighter, Shiver, The Deceiver, The Watcher and Balor. Their dark forces rely on a variety of creatures: the undead armies of Thrall, the swift Myrmidons, the raiding Ghôls, the dreadful Soulless, the hulking Mauls, the Stygian Knights, the mysterious Fetch, the secretive bre'Unor and their wolves, the powerful Shades, or even the massive Trow. Battle across the Gjol river, survive the cold winter at Bagrada, enter the obscure Forest Heart and make your way to the ruins of Rhi'Anon.
... and a lot more. 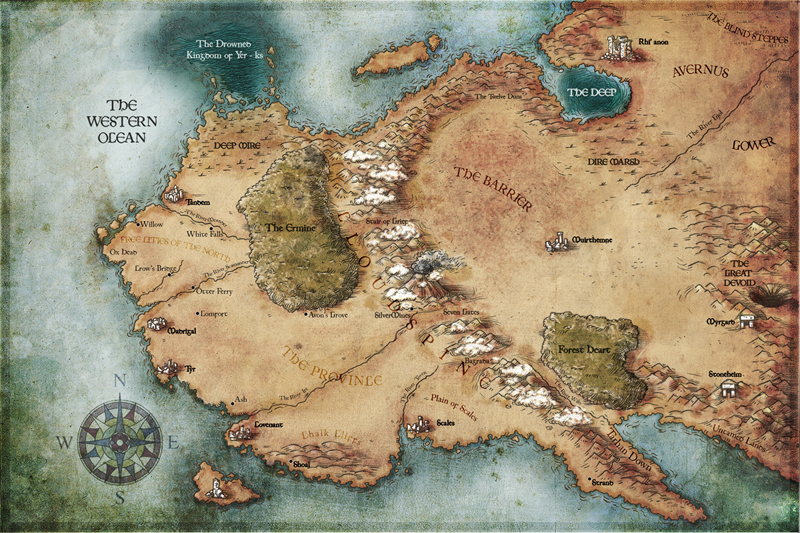 'The Apparitor' is the name that the ancient tales give to a white comet that, every thousand years or so, foretales the coming of the end of a period and the beginning of a new one.
According to those stories, each cycle is balanced by a figure of legend who is destined to be known ever since as either a Hero or the Leveler, bringing an age of light or darkness, respectively.

In the year 2431 AE, a legendary hero from an age past, returned from the east as Balor, the Leveler.
With the aid of a group comprising some of his once closest companions and even some of his once worst enemies, he razed to the ground the very land he ruled a thousand years back: the Cath Bruig Empire and it's capitol city: Muirthemne. It was the start of The Great War.

Acting as a natural barrier, a mountain range known as The Cloudspine spans from north to south, dividing the land into east and west.

As their cities fell one by one to the Fallen, those terrorized refugees in need of shelter fled westward. From then, the western Province and Free Cities of the North were all that remained standing for the civilized nations.

For 37 years Balor and his generals remained in the east, amassing great armies of undead, subjugating those unable to defend, and bargaining with those powerful races that would prove useful to their destructive plans....
...Yet, not all of them bowed to the Leveler and the Fallen Lords....

A desperate alliance was forged between Men, fir'Bolg and Dwarves to stand against the ravaging might of the armies of the Dark.
The ancient Forest Giants helped the alliance of the Light, by blocking one of the three key mountain passes across The Cloudspine for three years.

In 2468 AE, Balor, Soulblighter, Shiver, The Deceiver and The Watcher managed to cross The Cloudspine with their armies. The War in the West had begun.

By 2473 AE, the major western cities of Tyr and Covenant were besieged and razed by the Fallen and The Province armies' fell.

A group of arcane mages known as the Nine Avatara reunited the scattered armies of the Western cities and comprised them into the Legion.
Alric, Rabican, Cu Roi, Maeldun and Murgen acted as generals for the Legion in hopes of turning the tide of the war and in order to protect what was left of the civilized nations: The Free Cities of the North and the remaining cities of The Province: Tandem and Madrigal.

It is the year 2480 'Acit El' - The seventh year of the War in the North and the 49th from the fall of Muirthemne. Ever since, the millenary powers of the dark Fallen Lords remained unchallenged....
Until now...

...For the great White Comet has once again appeared in the eastern sky...

Hi everybody, Myth-fans, Total war fans and anyone else who is interested. I'd like you to know that the mod's public BETA is gonna be released soon. It will only contain custom-battle gameplay, both single and multiplayer. You'll be able to choose from 6 different factions, by name :

The mod is still under heavy development, no custom voiceovers yet and no working campaign. Our goal is to make a campaign which covers the events of both game Myth: The Fallen lords, and Myth II :Soulblighter, and of course the years passed between those. The list of units needs to be extended, but there are already a nice mixture of playable units from both sides. See you soon! ;)

Hi. Maybe you would like to try this mod? It is LOTR-themed and quite fun to play in multiplayer: https://www.moddb.com/mods/heroes-of-battle

I am currently developing a stand alone game
that is mostly inspired by Myth2 game,

Well it is dead...another good mod that bites the dust

this mod is dead ?

dwnlded this yesterday - absolutely brilliant. Shame it was never finished. This re done with Rome2 would be probably the greatest thing ever

I WOULD PAY CASH TO NECRO THIS MOD