The true method of knowledge is experiment. So, strapped to the underside of a stolen Combine helicopter, you're part of my latest scientific investigation. Objective: To infiltrate and observe this peculiar little island a few miles off shore, its heart burrowed out by our ever-loving benefactors...

Creator of the Minerva: Metastasis starts Ep3 work this October.

Read about it directly here. 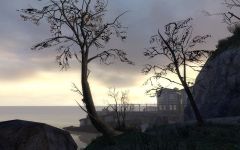 A faint recording of a ghostly, mechanised female voice encoded into the amplitude of a shortwave radio frequency, echoing off charged particles high in our atmosphere, leading back to transmission from a covert location in a destroyed eastern European city from an alternative, near future...

... indicating that, actually, I'll be starting at a certain Valve Corporation at the beginning of October.

What does this mean for MINERVA? Right now, I don't know - I'll initially be working on Valve's own Episode Three, but after that, who knows? I seriously suspect this isn't the end for this particular chain of experiments in designing single-player Half-Life 2 maps, all conducted for fun in my spare time.

Like any of my projects, it started off small, but rapidly grew far, far, bigger. It's not finished yet, but this time I actually released something. 'Episodic' worked.

And, I accidentally acquired a job in the process. Oops?

It's good to know that Valve is able to spot great talent. Good luck, and congratulations.

Glad to see some people obtain his reward for the much work. Grat and good luck !

Congrats! It was only a matter of time, really.

Oh snap, nice. This mod was great, I remember a bunch of people saying he should be hired by Valve a while back. Congrats!

Congratulations Adam! I loved playing through Metastasis, so hopefully we'll get to see more of your work in Episode 3!

For me Metastasis was the best mod ever done! The work done by Adam was amazing, the lower levels especilly were mind bogging. Congratulations Mr Foster, well deserved indeed!! (just registered to said this lol)

this news in inspiring to modders out there - keep making quality mods!

Gratz! Most atmospheric maps ever were made by you and thus I hope you will take it to Ep3 too.

As you can see, modding is good way to start possible career in game indtrusty. :)

I wish best of luck for your new job.

Yeah man you did well u deserve this cargo in valve ! YEAH!!!!!!

Congrats...
(you really really derserve this man...and I look forward to seeing your contributions to Ep 3 (or what ever))

Don't forget your friends you made here! :D <-----"self-seeking"
Good luck! And ask to Valve to hurry with Episode Three! <--"self-seeking again"

It'd be good to have an insider in Valve for choice "leaks" on Half Life 2: Episode 3 too ;) *hint hint* *nudge nudge* *wink wink* *yaknowhatimean yaknowhatimean*

Great mod, love it in Follow Freeman. Congratulations and thanks for all the great work so far. Looking forward to paying you for your future efforts!

Yay! another pro, "one of us! one of us!". Congrats on the new job with valve.

Episodic Seems to work wonders hence why I'm using that distribution method from now on.

Awesome, you've earned it with such a great mod.

You never cease to amaze me, Mr. Foster, you really never do.
Congratulations, I can't wait to see your name in the Episode 3's credits.

I always wondered why you didnt already work there. Your mod was my favorite and I'm excited to see what you do.

Congrats, wonderful for you.
You'll make a great addition to a great developer.

Congratulations from the ModDB team Adam, the amount of work which must have gone into your Minerva Episodes is amazing so i'm sure you'll be straight into the thick of things at Valve utilizing that knowledge you already have.

Ur mod was awesome! U deserve it =)

Congrats, and good luck in your future endeavors.

Congratulations! That's a huge honor working for Valve in October. Best of luck to you!

Congratulations Adam, I can't think of anyone more deserving of this recognition. It's always nice to see a modder make it to the big leagues.

And I bet,That with Adam EP3 Will be much more awesomeness than without him!!!

AH, I didn't think much of Minerva after the first level, but it got progressively better and better, and it felt really polished. Second favorite HL2 single player mod after Hard Day. Congratulations.

Amazing news... i bet this is every 'amateur' developers dream, to be hired by the company they are creating content for in their spare time.
Best of luck!

Finally, he deserves it.

Congrats Adam from the whole Design Crew at ST:E-TCW...

Definitely a well-earned place at a fantastic company. Just goes to show that hard work and talent does get rewarded. I'm sure its a dream of many people here to work at Valve, so congratulations and good luck with your job. Looking forward to seeing your work in Episode 3

keep up the good work and good luck in your future endevours (if i spelt that right, lol)