A side-project of love that is not some complicated detailed mod aimed at any era, story, or theme. MEGA is simply Vanilla EAW with pretty particles (From both KOTOE and Remake) and whatever units i can make from the vanilla models or kitbash out of them.


Corruption will be changed. Now only a single ZC hero will spread the yellow mist over the galaxy but the Empire and Rebellion can build agents who’s sole duty is to remove it. They will no longer use their heroes to do it and the agents will be spend. It will also be free since you are spending the credits on the agents. The ZC player will no longer need to play a corruption battle to spread the yellow cloud.

Game mechanics will only slightly change for generally better gameplay such as the movement of Fighters, Land Unit Accuracy, Multi-Layered Space Units. GC map will remain the vanilla planets but be laid out in accurate positions according to the old Atlas instead of the insane way Petroglyph set them up.

This mod will NOT be using ANY content from CANON and will solely use ships and characters from the PROPER Star Wars timeline instead of the one Disney is making us watch slowly die a torturous death.

We will kill the things we hate to save the things we love or else everyone will die and the enemy wins!
Everything else is Fake News and i like Lukes who werent in exile!
Build the wall around Canon and make Disney pay for it!
MEGA!

There's several things i'm currently working on that are serious projects such as Knights of the Old Empire 1 and 2 that are my own mods, and EAW Remake which i assist the great Dutchman Jeroenimo.

MEGA is my pleasure project that really isnt very serious at all since there's no care about detailed models, gameplay changes, complicated balance changes, or any complicated story or LUA coding.

The entire point of MEGA is to be a chill bit of fun for me to work on between the other stuff i do without really putting any real work into it since everything is mostly just kitbashed models, some minor coding edits, and particles and such from KOTOE and Remake.

Performance will be comparable to vanilla since there's no models with thousands of polygons and dozens of textures. Onlything really affecting perfomance is the increased number of units allowed in battle and the less hideous particles and projectiles since the vanilla ones are abominations i cant stand to look at.

Given the SUPER LOW standards i have for this mod i am considering lowering myself to put it on Steam for the people who are too lazy to manually install like we of ModDB have done for over a decade with EAW. Not totally sure yet if i want anything i've done to appear of that archive of stolen, reuploaded, and slightly edited and renamed mods. I like the support and protection of ModDB far too much honestly.

KOTOE/MEGA Discord: Discord.gg
EAW Remake Discord: Discord.gg (If I were running ‘The Remake’, I’d fire The Hand of the Dutchman for always reminding people how great it was before Petroglyph added the Steam Workshop to the game and people knew how to put the folder of a mod into the Mods folder by themselves instead of having it done for them. I mean, I’d look at him right in that mean, douchebag face of his, I’d say ‘Niko, you’re fired.’) 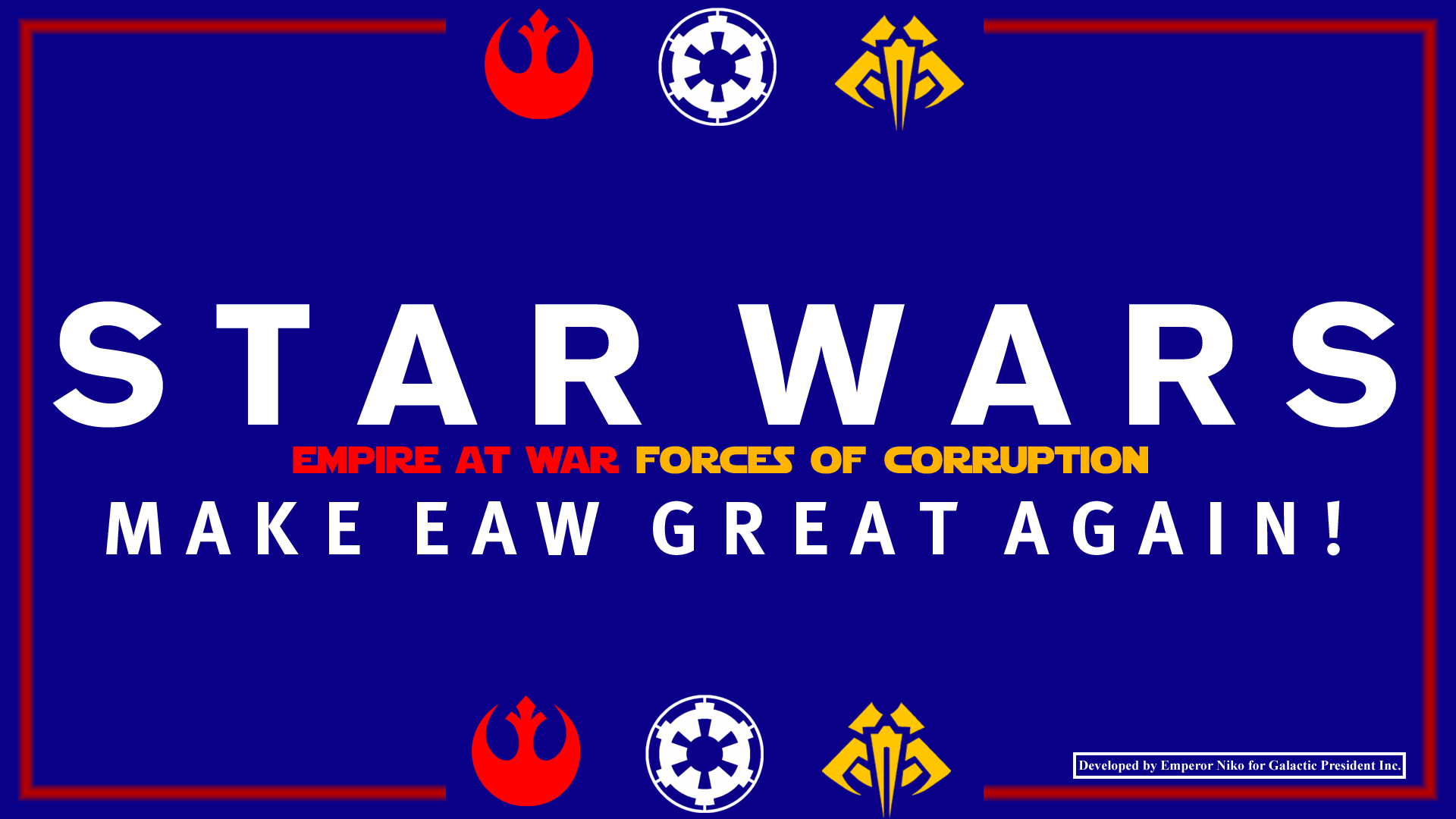 A Collection of models that have reskined, kitbashed or just rerigged from Vanilla EAW models along with some random icons. Credit: Emperor Niko

I would have replaced "Emperor Palpatine" with "The Senate" name

But The Senate dissolved The Senate to give powers to the regional governors.

Also nerf the ZC AI as well because ZC AI is too annoying, as they can corrupt my planets, sabotage my buildings, and bribe past through bordering planets to attack on my important assets.

The ZC is being turned into a kinda blended Criminal faction. The Corruption mechanic will remain but will be limited by a single hero unit that will spread corruption instead of defilers.

Can you buff the Rebel AI?

What is Knights of the Old Empire mod?

One of Niko's first mods, check it out on his profile.