This mod started out as a compilation of all those other mods that add new styles to Jade Empire. Eventually I figured out how to add styles myself and added a few more. All in all there's around 40 styles now. 50 if you count weapon upgrades as well. Quite a lot of styles have been modified. Some have been re-balanced. To others I've added new effects. And some have been re-purposed entirely. But I didn't stop at adding and modding styles either. There are new gem armors, new techniques, new merchants, brand new concepts like specializations... I can say without the slightest bit of exaggeration, that this is the largest mod for Jade Empire out there. In fact: It is many times larger than all other mods combined and that is not just because it *contains* so many other mods. The last time I checked the codebase totaled to 25,000 lines. In other words: This mod is a complete overhaul.

The current version of my mod sports a very special feature. One you probably haven't noticed yet. I kept mum about it until now, because it deserves a proper introduction...

The next full version is still a week or so away, so allow me to draw your attention to a "secret" feature of the current release: the new and improved focus mode. It may not strictly speaking be a secret... You can simply go to the options-section of the cheat-console and enable it. But I haven't documented or even mentioned it anywhere yet, because I wanted to properly introduce it first. That's also why it's disabled by default - even so I cannot imagine the game without it anymore.

In short: Going into focus mode cancels your action queue.

Well... This touches upon some of the finer points of combat in Jade Empire... First we need to get two popular misconceptions about Jade Empire out of the way:

Earlier Bioware titles like Neverwinter Nights or Knights of the Old Republic featured an action queue. Both were turn-based games. You would perform an action... and then your opponent would... and then you would... and so on. Every action - be it a weapon change or a spell or an attack or what have you - was queued first and performed when no other action was queued in front of it and when it was your turn. 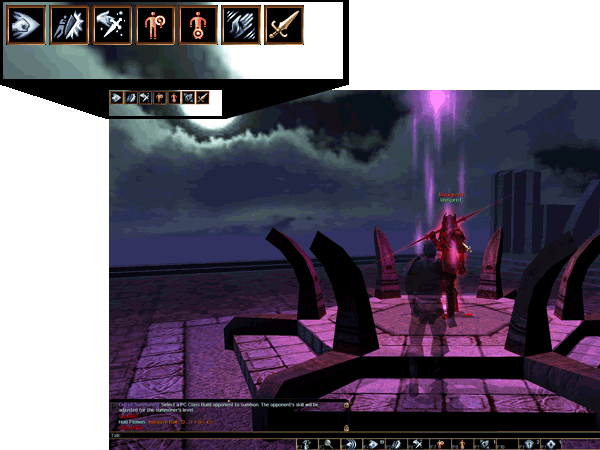 Neither NWN nor KotOR relied on reflexes and twitch skills as Jade Empire does. You had a lot of time during combat in these games. Therefore both games allowed the player to manipulate the action queue. In NWN you could unqueue the last action by clicking on it. KoTOR developed the manipulation of the queue into a fine art. You could unqueue the last action. Cancel the entire queue. And over the targeted opponent's head you'd find a multipart-menu with the possible actions to queue. 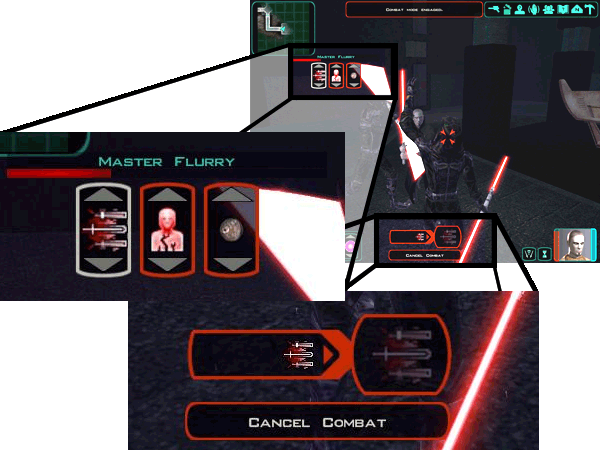 Suppose, you kill an enemy with the first of your three-strikes-combo. The enemy may be dead, but you still have two more attacks in the queue. And those will be performed. The queue is full and therefore it must be emptied. Enemy or not. And so your character performs two ridiculous air moves - punching holes into absolutely nothing - while he's walking into the spear of another enemy - who was waiting behind his buddy for just such an occasion. You will have to watch the whole thing helplessly. You might try to hit the block key, but that seemingly has no effect. Why? Because the block will be queued behind those two air moves. You might try to switch to another style, but that too will be queued. Once the actions are queued, there's squat you can do. That leaves you with plenty of time to scream at your character: "Don't walk into that f***ing spear, you imbecile!"

Sounds familiar? This is why people call JE's combat "clunky". Your character seemingly doesn't do, what you ask him to do. But he does. Just not right now. It may take a second - under extreme circumstances even several seconds - before the action gets executed, but eventually it will. It may be the wrong action at the wrong time, but it will be executed. Eventually.

Queue as queue can

Sometimes you can use the queue to your advantage. Once you have an enemy under attack you may be able to keep him staggered indefinitely. After your first three strikes, queue a block or a style change. Then queue another three strikes after that. And another block or style change. And another three strikes. And so on. Until you have defeated them. Of course there's another "unless" coming up. This does not work so well on enemies who use multiple styles. Changing styles cancels the stagger effect. You think you have them staggered and then suddenly your face is full of sword.

So. No matter how much more cleverer then the AI you are, the fact that you are so often a few actions behind the events, puts the AI at an unfair advantage. That may not be noticeable if you're up against a single weak opponent, but multiple opponents or a single one with multiple styles can interrupt everything you do. You on the other hand cannot and so you will be frequently caught with your pants down.

The new and improved focus mode

Wouldn't it be great if you could cancel the action queue yourself and react instantaneously to a changed situation? That's where this new feature comes into play. The moment you go into focus mode your queue is cancelled. If you have started to perform a strong attack, it will be aborted midway. If you're vaulting over your enemy, you will be plucked out of the air and stand right in front of him again. This may be a little confusing at first. It may also look a bit silly at times. But the most important thing is: The next button you press, the next action you initiate, the next thing you do... will not be queued. It will be executed immediately. Right now. In real-time.

The amount of code I had to write for this, was surprisingly small. Just a few lines, really. But the impact is huge. It feels incredibly empowering to suddenly have absolute control over your character. Don't take my word for it! Try it out yourself! Or watch the video!

But there's always a but, isn't there. This change is highly disruptive. Some of you may even decide, that it breaks the game and completely unbalances it. To mitigate that a little, I've attached the cancellation of the queue to the focus button. I could have attached it to the target-change buttons or the pause button... But attaching it to the focus button, also attaches a cost. If you don't use this feature judiciously, it will nix your focus within moments.

So what do you think?

Which brings me to the title of this article. I've labelled it RFC (request for comment) for good reason. Since this feature is such a game-changer, I expect not all of you will like it. Or not in its current form. If you do or do not like it, let me know! If you do have a suggestion how to improve it, let me know! I'm honestly curious what you think about this change!

I thinks this is awesome! And you nailed on of the most common problems in JE.

I suspected, way back when I played the game, that - since they used a familiar Engine- it too uses a similar mechanic as say NWN or KotR.

But not being a coder or such; just a gamer, I couldn't be sure. But you now confirmed it.

I'm looking froward to try this.

One question though, how does it translate with he difficulty?

One of the difficulty of JE was the clunky combat! Won't it be too easy now?
Since the new Focus rises the Player reaction-times in the game-world.

There are already plenty ways to make the game easier. Just transform into a Jade Golem or a Red Minister, when the going gets rough... or use Harmonic Combos to instakill your opponents... The game comes with its own built-in cheat modes, if you will. But just because they're there, doesn't mean you have to use them. Nobody forces you to play the game in a cheesy way.

So, yes, it's possible that I added a new kind of cheesy, but that's not the way I look at it. Central for me - personally - is that I feel in control of my character. Vanilla Jade Empire sometimes makes me feel like a handicapped person. I know what I should do. I have the time to do it. But I don't have control over the my limbs. My arms and legs just won't do as I want them to. And so I end up getting pummelled.

Getting rid of that very uncomfortable feeling is - for me - what this is about. I've also been told, that I swear a lot less, while I play :)

WHat I really like about the new Focus mode is that as a mage I can finally use the area attack of the dire flame style efficiently. I mean usually if you use it most enemies simply jumb back, attack you (and possibly kill you) or simply block. Using the new focus mode allows you to move while the dragon is summoned if used wisely.

On the down side I used to like starting a heavy attack and if the enemy tries to interrupt it switch to focus mode so that his attack won't reach before I finish the attack. Since the action itself is cancelled in new focus mode this is no longer possible.

So personally I love both the normal and new focus mode. Having a way to cancel your actions though was something this game needed. Well I think even with the new focus mode the difficulty is still pretty much the same (I mean if you simply want to win using Jade Golem and Red Minister is enough as pecoes mentioned).

I think this should be turned on by default. It adds something the game really needed, and imo, a new strategy to combat. I feel like I will be using Focus a lot more now.