There have been a few people who've had difficulty with uninstalling It Came From Red Alert! (or rather it uninstalling itself), this appears to happen if the launcher fails to add all the files correctly and it definitely happens if you click the wrong option when you exit the mod. This article is to help you deal with these eventualities.

There have been a few people who've had difficulty with uninstalling It Came From Red Alert! (or rather it uninstalling itself), this appears to happen in the rare event that the launcher fails to add all the files correctly and it definitely happens if you click the wrong option when you exit the mod. This article is to help you deal with these eventualities.

After playing the mod you exit the game in the normal way (via the main menu) and will be presented with this box:

You are given this option to facilitate the creation of maps for ICFRA! which can't be done without the files being left installed. If you were going to do some mapping you could either leave this window open for the time being, do your mapping, exit the FinalAlert 2 mapping program and then click on the 'Yes' button to remove the mod files or click on the 'No' button to leave the files installed while you map.
If you do not want the files to be left in the Red Alert 2: Yuri's Revenge directory you should click on the 'Yes' button.
Should you accidentally click on the 'No' button, or have intentionally left the files installed for mapping and now want to remove them, you can uninstall the mod by running the launcher application again, then clicking the 'Launch' button to launch the game - when the main menu appears simply exit the game and you will be given the option to deactivate the mod.

It would seem that very rarely some part of this process can fail and lead to the mod not being correctly installed or uninstalled, I suspect this could be linked to a corrupted download but I'm not sure.
If you suffer from problems ingame (invisible units and buildings seems to be the main symptom) you should exit the game and deactivate the mod, then run Red Alert 2: Yuri's Revenge without the mod installed (via your usual shortcut, NOT by the ICFRA! launcher application). Hopefully the uninstall will work properly. If it doesn't you may have to do a manual uninstall of ICFRA! which, fortunately, is more straightforward than it sounds.

If you installed ICFRA PRC1 or PRC1z you need to delete the files listed in the image below: 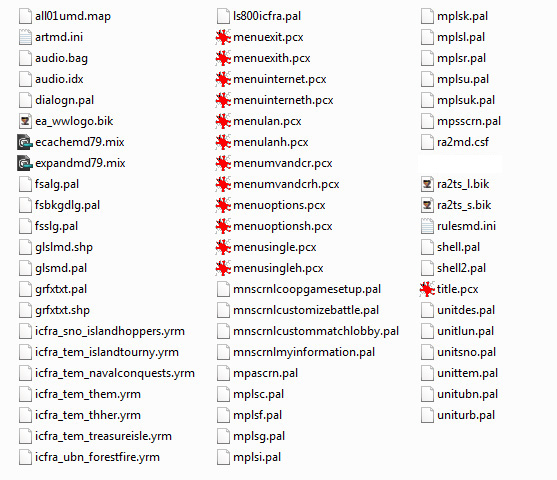 If you installed ICFRA BR3 you need to delete the files listed in the image below: 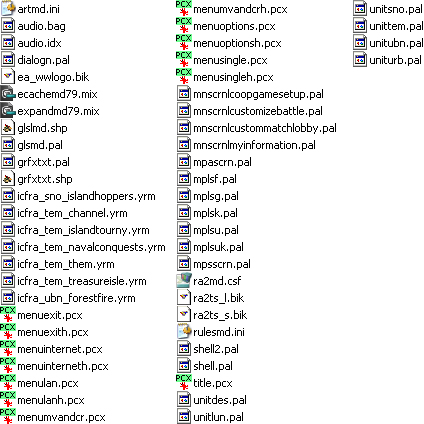 Deleting these files will return Red Alert 2: Yuri's Revenge to normal operation. If it does not then there is something else causing problems with your copy of the game and unfortunately the only sure solution is to reinstall the game.

If you installed NPatch you may wish to uninstall that also.

If this hasn't soured your opinion of the mod and you wish to try again then I would recommend redownloading the ICFRA! launcher application just to be sure it isn't corrupted and keep a clean backup of your Red Alert 2: Yuri's Revenge folder so you can restore it easily if you need to.