So I'm a bit late on updating this thing once again, but rest assured progress on Inhuman has been quite good. There's been significant updates to weapon feel, npc behavior, and how player health works. I think the mod is now at a point where it's really more its own game built on top of Half Life 2 rather than just a few small tweaks!

Inhuman's weapon balance has been a constant source of work for me as I've never been incredibly happy with the way guns worked in Half Life 2. My big goal for this mod was to get each gun feeling like it filled in a unique role, and for each gun to feel pretty good when used in that role. I'd say out of the 4 main guns (Pistol, SMG, Shotgun, and AR2) the first 2 are somewhat weak, the shotgun is massively overpowered, and the AR2 awkwardly overlaps with the SMG and its low max capacity ensures the player will almost always be using it exclusively against soldiers using AR2s themselves I'll go through each gun and how it's changed from the base game:

Starting with the player's first weapon, the pistol has seen some big changes to how it feels. With a significant buff to its damage, the pistol now occupies a more legitimate threat at a medium range against single targets, with 3 headshots on a soldier being all you need to take them out! Instead of clicking repeatedly to fire the gun faster, you can press the right mouse to fire it much faster at the cost of accuracy. The pistol from Halo 1 and F.E.A.R were big inspirations for the direction I took it in this mod. The pistol has probably evolved more than any other gun in this mod's history and I really like the place where it's at now.

-Starts decently accurate and becomes less accurate as you fire

When people say they don't like the way weapons in Half-Life 2 feel,the SMG is usually the gun they're focused on. For years I experimented with a couple different approaches to changing it, and for a while I fell into the same trap as Black Mesa where it became the most powerful gun in the game when I made it far more accurate and reliable. I've found a much happier middle ground with it now, bringing its base accuracy above its vanilla counter part and giving it a gradual increase as the player fires it. This combined with enemies having a chance to flinch when shot has firmly made it a solid mid to close ranged option.

This change might be the most controversial on this list, but I felt that bringing down the shotgun's stopping power was important to making it fill its role more neatly. The shotgun in Half Life 2 is almost always better than any other standard gun at anything but a long range. It pretty much wipes soldiers and zombies out with no trouble which, while satisfying, also makes combat in close quarters incredibly easy! I think the shotgun is at a place similar to its counter part in Half Life 1, a gun you generally have a decent amount of ammo for that is pretty effective at killing soldiers up close but not so effective than you're gonna get a guaranteed kill off one click.

Firing Mode Change: Full Auto to Three Round Burst
Mag Size: Reduced from 30 to 24
Max Capacity: Increased from 60 to 72

With the change to burst fire as its main way of firing, the AR2 has a much more defined role as a powerful long range damage option for the player. Unlike other main hitscan guns, the AR2's bullets are also guaranteed to stun soldiers, making it easier to stop them from firing back even at long range. The main goal with these changes was to make the AR2 feel more like its own unique gun rather than overlapping with the SMG as a more powerful and accurate full auto gun. 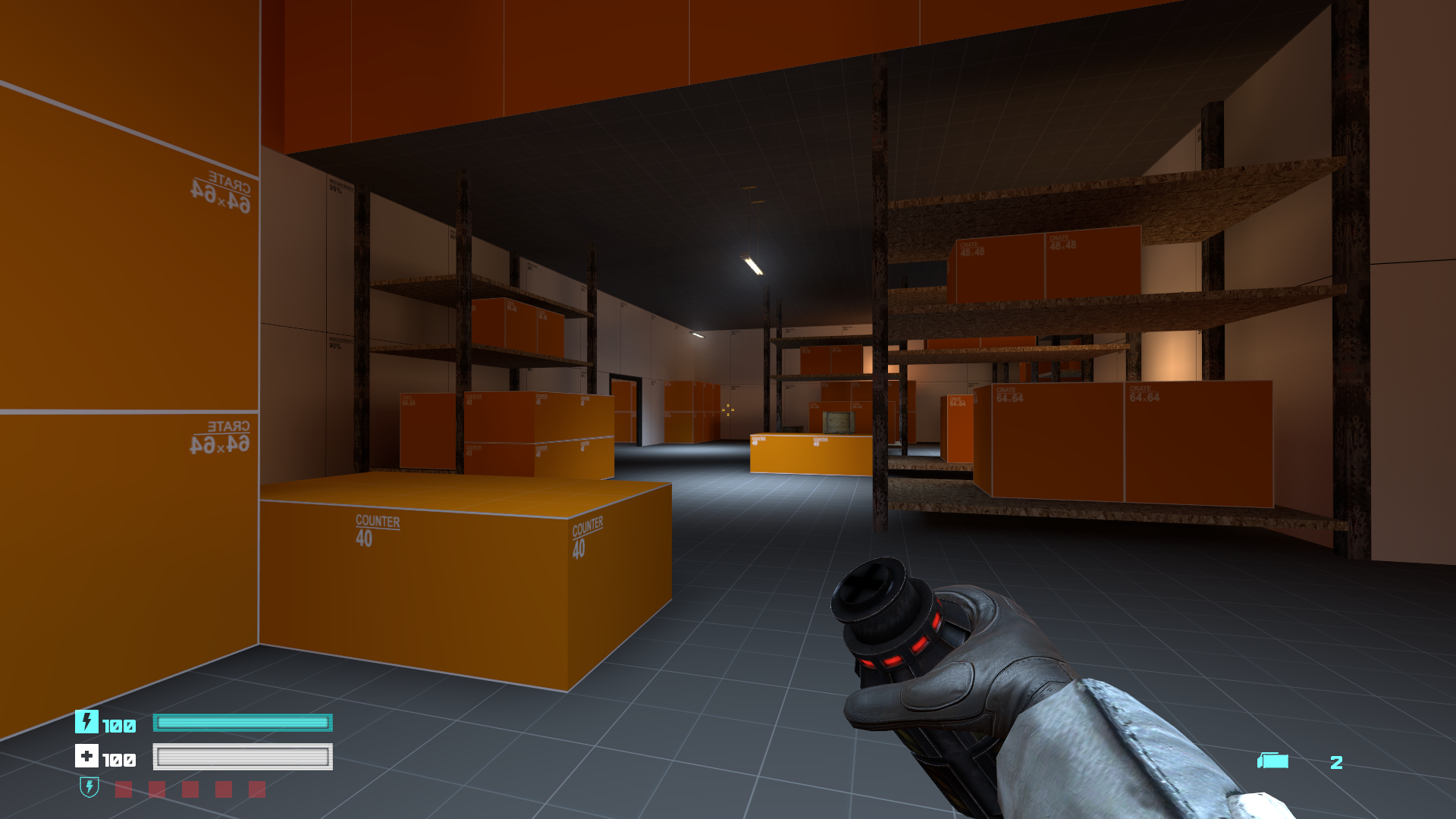 New grenade model by Apocalyptic Studio, rigged to our arms by Kralich

My last big overhaul of soldiers 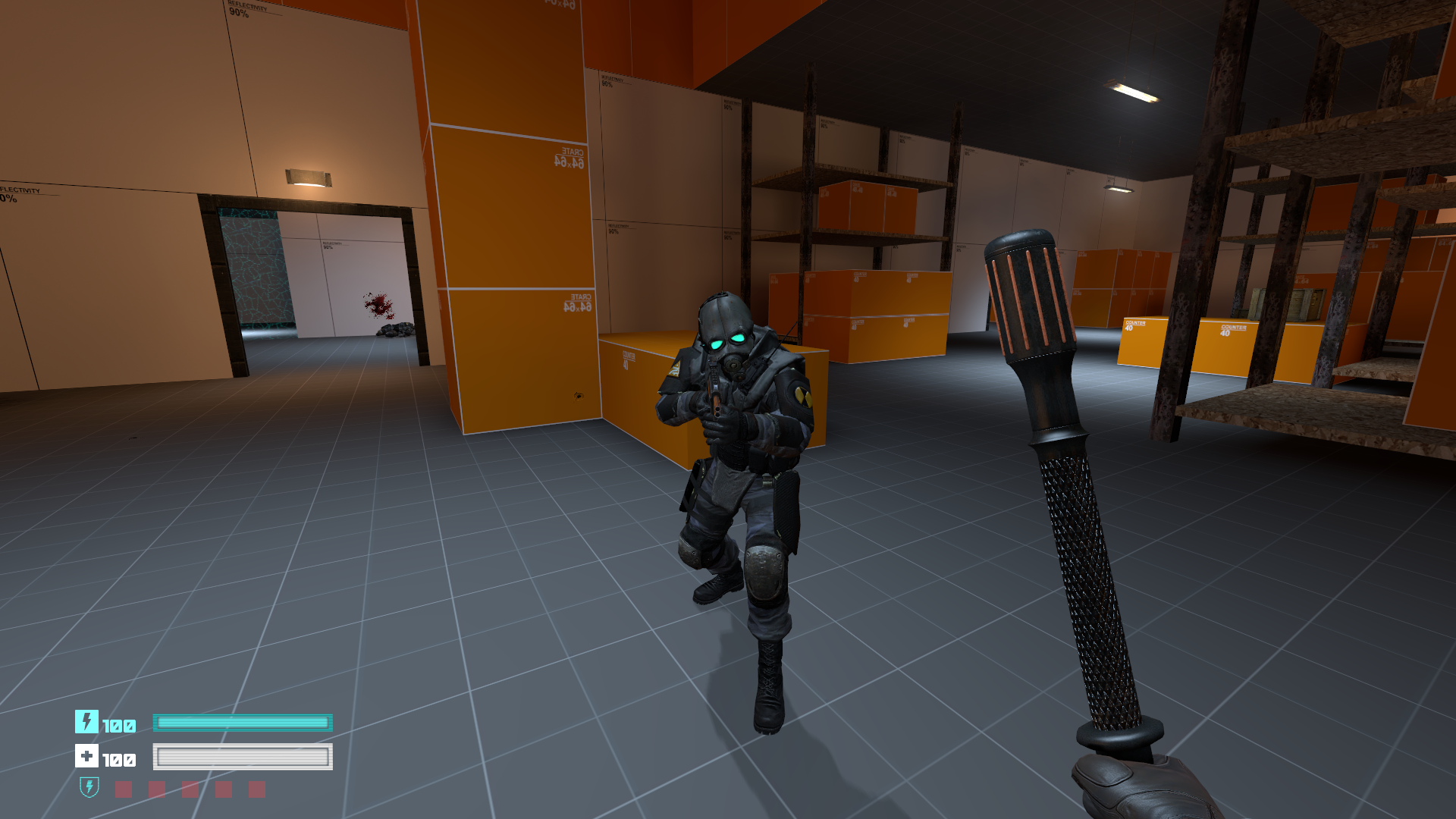 Anyone who has followed this project or knows me should probably be aware that getting the Combine soldier to the next level has always been a massive goal of mine. With this last update I think they're finally in a place where I want them to be. I've accomplished this with a combination of changes to them directly as well as making new map entities to help give them more context.

-Soldiers flinch when taking damage from the AR2 and 357 and have a small chance to do so if hit by the pistol or smg.
-Soldiers will continue to fire back when hurt like the HECU in Half-Life 1
-Soldiers almost never override where they're facing when running to better telegraph their movement intentions. (No more facing the player while running backwards to cover!)
-Soldiers have two new behavior systems which dictate when they go to cover or advance on the enemy

Combine Soldiers are no longer the push overs they once were! With the ability to fire back when hurt, soldiers can claim their space much more effectively, especially in numbers. This helps incentivize the player to figure out smart ways to take them out such as using grenades to force them to move, or running to another room to try and pick them off at a different angle.

Battle zones are a new entity mappers can place in their maps to dictate zones of control for soldiers. When active, soldiers will base their movement decisions on zone control rather than directly positioning to the enemy. In other words, rather than running to establish line of sight on the player when they can't see him, they'll look to see if a valid zone is closer to you. If so, they'll move as a group to take control of that zone. Zones can also be given priority settings, meaning that soldiers might not leave them unless you give them enough reasons to do so. What this means is level designers no longer need to rely on scripted sequences to get them in smart positions.

With the smart usage of battle zones, you can reasonably expect soldiers to control the map like a coordinated team! This allow for a variety of situations you just couldn't expect from the default ai such as:

This is honestly the biggest feature I've coded for the mod and when some other related components are done I plan on making it publicly available!

But where are the levels?

New levels were a big focus in the early parts of this year and led to a successful vertical slice getting done. However this second half has been a lot more systems driven, with much of the mapping still done with dev textures. So while there's some decent playable content I don't want to show off more than I already have just yet, but I am strongly considering a release of the first half of this game in Q1 2020. Either way I am aiming to be done with by the summer of 2020, so stay tuned for new media in the near future!

Large portions of this mod are going to take place in brand new locations featuring a mix of Combine architecture and grimy old industrial metal/concrete, a look very much inspired by some parts of the beta. We could always use some new assets to help make this vision really come to life! On top of this, we could really use new level designers with experience making Half Life 2 or other Source engine maps as I am currently the only main mapper on the team!


That's all the news I've got for now, hope you found this interesting and have a great holiday season everybody!

I love the new Soldiers model, they look more badass and threatening and more detailed despite wearing more or less the same outfits and equipment but more prominent and noticeable, great job!

I think, the balance of weapons seems pretty good now. However, I wish we had an option for AR2 to change the fire mode between full auto to three round burst.

Anyways, thank you for your effort and dedication to your project!

Have to admit after all these years, the standard combine hazmat uniforms somewhat resemble a 2nd graders snowsuit, so it's great to see them in a more nimble and tactical outfit.