Imperial Dimension Neptunia (IDN) is a mod that aims to bring the fun of Neptunia to RTS format! It takes place in an alternative version of the Imperial Remnant era from Star Wars Legends. Imperial Dimension Neptunia overhauls and rebalances the Factions of Empire at War and even adds the Planetune Empire. Lots of new units from the Neptunia universe are added too. Neptune, Noire, Iris Heart, Arfoire, Kurome and many more characters will also appear to lead various mighty Empires!

Imperial Dimension Neptunia is a mod for Empire at War that aims to expand the EAW game by bringing the Neptunia series to RTS Format! It started it as a personal project at first, but I decided to expand this mod. Currently this is the first public alpha release of the Imperial Dimension Neptunia mod.
NOTE: As the mod was developed using the steam version of Star War Empire at War, it works perfectly with the steam version, but I cannot garentee perfection with the non-steam versions of Empire at war. New updates for the mod will be made using the Steam version of EAW.

The Imperial Dimension Neptunia mod is mainly Hyperdimension Neptunia themed combined with Star Wars Legends, but it also has stuff from various other series such as valkyria chronicles, star trek, and other Idea factory IPs. The mods goal was to expand the base game by adding many new units, and improving the quality of certain units already in game. Theres lots of new hero units, music, and other goodies in store!

This mod takes place in an alternate timeline of the Star Wars expanded Universe after the fateful battle of Endor. Lots of new heros and units have been added both for Space and Land battles.
From Neptune herself to the rest of the CPUs to the Gold Third to Valkyria Chronicles heros like Selvaria Bles and Welkins. Additionally Starkiller, Rahm Kota, Admiral Thrawn, and the Mandalorian himself make apperences as well. While this was changed, alot of the vanilla EAW units got new models as well.

This mod contains 3 GC scenarios as of now. The first GC scenario will be a modified version of Equal Footing. Unlike the vanilla version of this GC, the IDN versions will have around 15 more planets (around 60). The second GC scenario will be called Imperial Fractures. This GC will be set around 18aby, a few months before the events of Timothy Zahns novel Specter of the Past.
The main win condition for the Imperials will be to defend themselves and reconquer the galaxy; meanwhile the main win condition for the New Republic in this scenario will be to capture key Imperial worlds such as Bastion, Muunilist, Planetune, Lastation, Hypori, and Bespin within 80 days.
The third GC Scenario will be called War Games. This scenario will be a classic 1 Planet start GC. Each faction starts off with 1 Home planet, a small assualt fleet of ships (including 1 big capital ship) and ground infantry (a mix of infantry and tanks), and a select group of heros. The win condition for this GC will of coarse be to conquer the galaxy and destroy all enemy factions!

As this is just the first release, there will be further updates that add more stuff to the mod. Also if you find a problem/bug in the mod, please report it either on my discord server or on the thread in the discussions section.

Have fun and may the force be with you! Sincerly,
Warper243 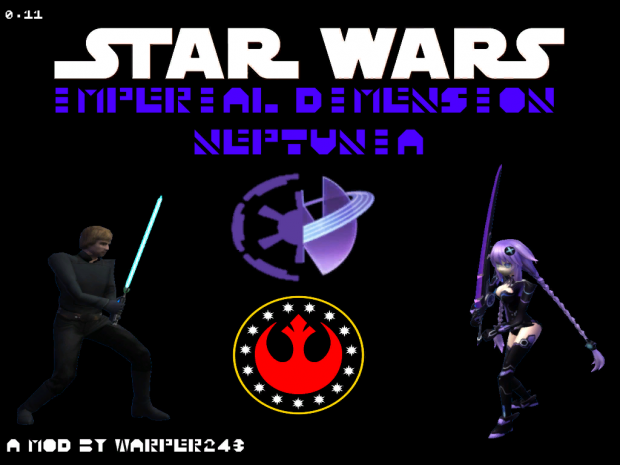