Posted by HexenEdgeOfChaos on Feb 21st, 2012

Welcome all to our first installment of new developer interviews! This week we introduce to you Caffeine Freak. Our lead level designer and the main reason our first release even materialized as a playable game. Enjoy!

Q: What do you do for a living; Can you tell us something about yourself?
Currently, I go to school full time. I live on such low expenses that financial aid covers the rent, and most of my non-school time is reserved for modding.

Q: Have you worked on other mods before Hexen: Edge of Chaos?
Nope, my first one. 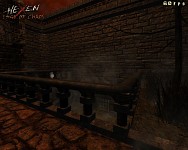 Q: Which part of EoC are you currently working on?
I'm currently refining and polishing hub 1, which encompasses h1m1-h1m3b, because there were a lot of rough spots left in there before our release. At the time, we were crunching to meet a deadline, so I didn't have enough time to bring the first hub past a certain point of refinement.

Q: When did you hear first of EoC, and how?
I actually found out about it in early 2009, when I saw it linked in BloodRayne's signature on doom3world. I clicked the link, and the rest is history.

Q: What style of developer are you? Do you rush into things, or do you plan a lot in advance?
A little bit of both, but I tend to start working with a concept on screen, develop it a bit, and go from there. So I tend more towards the former, though that's something I'm trying to steer away from more and more, because the more professional and efficient way to undergo game design is to plan heavily in advance. 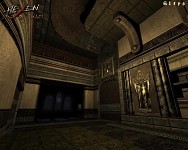 Q: What was your first experience with the Hexen/Heretic series, and how did it impact your view on computer games?
I played Hexen for the first time in '96 I think. I remember running around as the mage in the first level of the game, and being totally immersed in the atmoshpere. I remember feeling so eager to try out all three character classes, and feeling intrigued by how much variety that offered. Since I was only around 10 at the time, there were a lot of things about the game that I didn't grow to appreciate until I was older, but I fell in love with the series right away, and it's still one of my favorites. In fact, my favorite classic games would be a tie between Heretic, Hexen and Doom II.

Q: Are you working on any other mods or projects right now?
Yes, I've been working as a level designer on Doom 3:Phobos since about May of 2010.

Q: What do you like best about the Doom3 engine? What would you improve?
I think the answer to both would be the lighting. Id Tech 4 was revolutionary in it’s beginning with the truly dynamic lighting and real time shadows, but it also has it’s drawbacks. The lighting is still nice even by today’s standards, but the light and shadows in the game tend to be very sharply defined, which presents a lot of limitations. You can’t place a light in a room and expect for the objects it hits to cast varying degrees of shadows, which is what you will find in real life. All the shadows have the same level of darkness, and it becomes noticeable. 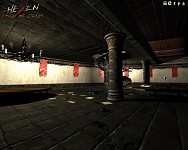 Q: What's been your worst experience so far with making EoC?
The inner team conflicts we’ve had. We had some particularly vicious fights the first year and a half I was on the team, due to things like creative differences, different styles of management, etc. Thankfully, things have been relatively peaceful the last eight months or so.

Q: What's been your best experience so far with making EoC?
The feeling of releasing the demo was awesome, I have to say. You’re nervous about whether or not people will like it, and for so long, you’ve been slaving through development, all to the point where time itself has become a blur and everything else in your life is secondary to this. I also felt a considerable amount of outside pressure. At the time, I was the only mapper working on the demo portion, and the project was already in it’s fifth year at that point, so I knew people were expecting something good. Also the fact that it was my first mod project ever only added to the strain I felt. But finally releasing was a fantastic feeling, and it seems the reaction has been largely positive, so I’m grateful for that.

Q: Which is your favorite character in the game?
Of the characters that we currently have, I'd have to say it's a tie-up between the Ettin and the Shadowspawn.

Q: Which aspects do you consider to be crucial in keeping the original Hexen feeling going in this project?
That’s probably the most difficult question for me. It’s really a combination of a lot of things that make it feel like Hexen. A combination of the right atmosphere, music, level design, architecture, enemies and puzzles is the short and simple answer, but to really explain it would require going about two more pages in-depth, and I don’t really care to do that right now.

Q: What is the hardest part about working on Hexen:Edge of Chaos?
Constantly trying to stay creative and innovative, coming up with new ideas, and applying them. It’s easy to fall into a pattern of essentially repeating what you’ve already done, if you know it works. You just have to remember that someone will be playing this at some point, so at any given time, you have to try to think “what’s the best way in this situation to wow my audience?” Personally, I’m always trying to stay innovative and original with the structural design and detail of the levels. It’s easy to copy-paste, but it’s not always the best thing to do.

Q: Which game are you currently playing?
Been playing a lot of L4D2 lately.

See you all in 2 weeks with our next developer!

Very nice interview!
I was impressed with the demo and everyone's translation of the original Hexen.
I had waited a few years to play a demo and you guys totally followed through.
I look forward to more media and releases!

Very nice indeed! I didn't experience the demo, but i will when I get the time too. But for what I've seen, it is going very good the development.

Hello ... I just wanted to say I too am looking forward to more game playing for Doom 3 EOC ... I've tried to help the cause by including in my signature at ... www.videohelp.com ... a link to this website ... my member name at www.videohelp.com is ... lacywest ... cheers.

Thanks for the support! We've actually gotten some traffic through it believe it or not! Were wondering where it actually came from and then found this post.