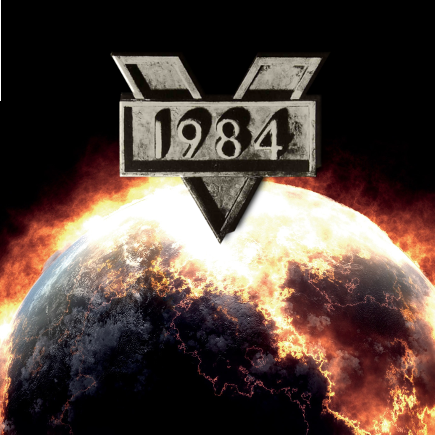 Nuclear warfare has ravaged much of the world, and from the ashes came the new world order. The three remaining super-states vie for global domination: Oceania, Eurasia, and Eastasia, and between them lies the Disputed Zone. An armistice has been declared, but on January 1st, 1984, the truce shall expire and the second apocalyptic war will begin.

This mod utilizes the setting from the George Orwell novel Nineteen Eighty-Four to create a more competitive multiplayer scenario designed for a massive three-way war between teams of players, with the likelihood of developing shifting temporary truces between the factions to achieve short-term goals. The fourth faction, the Resistance, exists to serve as a focal point of the war, as most of the world’s resources lie within the borders of the Disputed Zone, creating a high priority target for the other three factions. For this reason, it is not recommended for players to select Resistance nations in multiplayer games.

This mod is very light on events and may not be for everybody. The stories you will create will not come from alternative history "what-ifs", but purely from your own strategic choices and actions on the battlefield.

Looking for people to play with and discuss the mod? Join the public Discord server.

The newest expansion, No Step Back, for Paradox Interactive’s critically acclaimed strategy game, Hearts of Iron IV, has just released. To celebrate, here’s five great community mods for the latest entry in the series!

Hearts of Ice and Fire 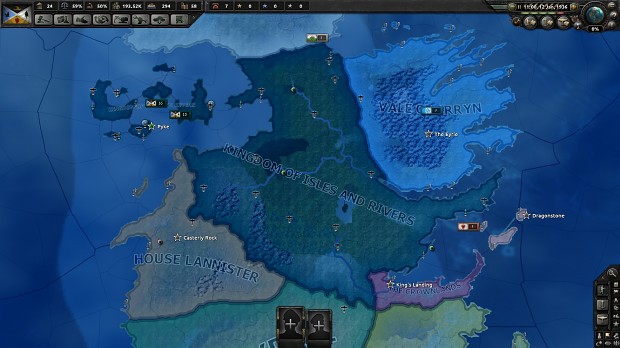 Hearts of Iron is known for its meticulous political and military manoeuvring, with an intense focus on outplaying opponents through long-term strategic planning. Whilst a little unusual, it’s no surprise that the Game of Thrones franchise’s political grandstanding fits handily into Hearts of Iron. Playing across multiple contents from the series’ world, the ultimate fate of the Seven Kingdoms and beyond will be down to your careful political machination - and well-placed military confrontation. 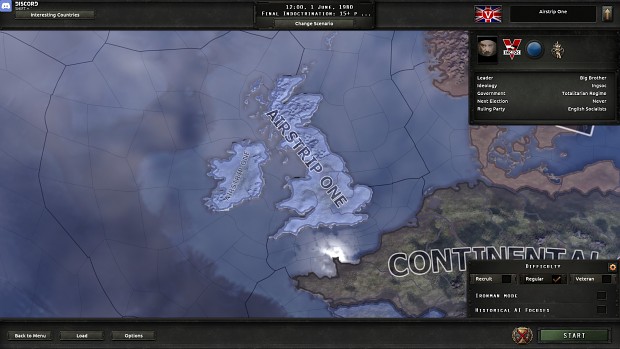 George Orwell’s 1984 is an essential bit of fiction that warns against the nature of overly-oppressive governments and surveillance. Its wider world has often been theorised and contested, given most of what we see is only the immediate nation surrounding the book’s protagonist. This mod, however, hopes to transport players into the depressing and militarily complex world of the book, filling in gaps and providing a substantially different set of political and military problems to solve. 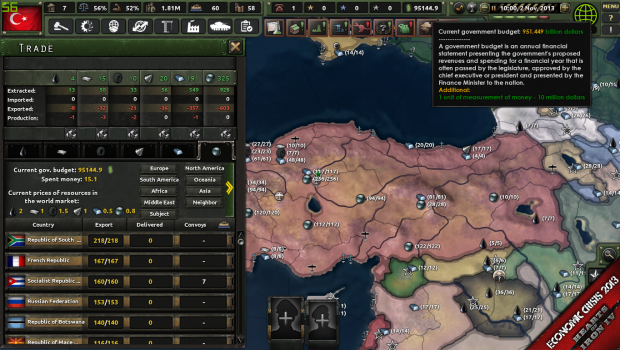 Whilst Hearts of Iron has traditionally been centred around the Second World War, this mod advances the timeline considerably and places the premise in the early 2000s, describing the political fallout of an economic crisis in the modern day. What comes next is a series of new systems for money management, trade, and diplomacy, with new cash mechanics that implicate wider issues from the financial collapse. The mod is a very different - and potentially, very close-to-home - take on the Hearts of Iron formula. 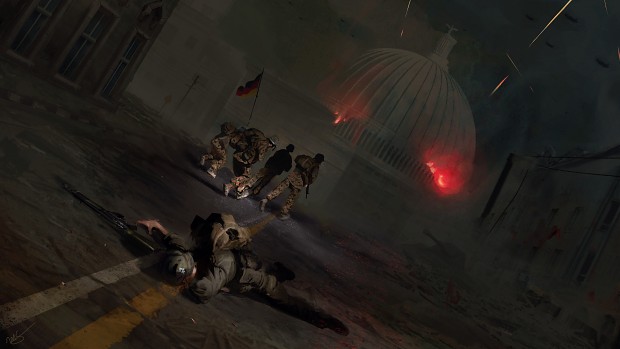 One of the biggest and most popular “what ifs” in historical fiction is regarding the ultimate victor of World War II. This mod takes it in an extreme direction - the Axis powers winning quickly and easily but collapsing just as quickly, losing control of the peace. It’s up to the player to either find a way to hold onto the power, or take it back from underneath the oppressing Nazi overlords. 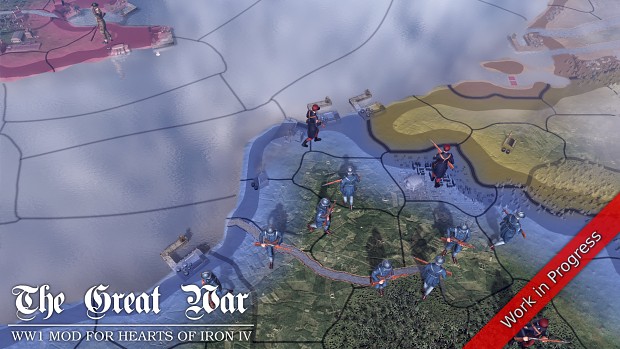 It goes without saying World War II is one of the most influential conflicts in human history, but the first World War - The Great War, as it was named at the time - has also had a significant impact on the development of global society. It’s only natural, then, that using the formula Hearts of Iron IV establishes for mid-1900s political and military control to tell the story of the first catastrophic conflict of the century produces a remarkably well-made mod. Players will have to contend with issues across the world in establishing an ultimate victor, whether following the path of history or not.

Hearts of Iron is a grand strategy franchise where players are required to plan great strategic moves on a global scale to claim victory for their faction. The games are traditionally set in the World War II period, placing players into the conflict in control of one of the major (or minor) nations that took part. 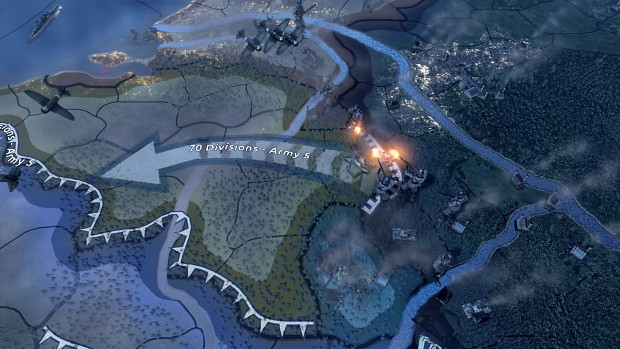 Hearts of Iron IV is the most recent entry in the franchise and has enjoyed a steady stream of support since release, featuring both paid and free DLC and seasonal updates. The most recent, No Step Back, gives the various nations in Eastern Europe and particularly the USSR much more detailed mechanics, with many new units and systems to manage if players choose Russia as their starting faction. 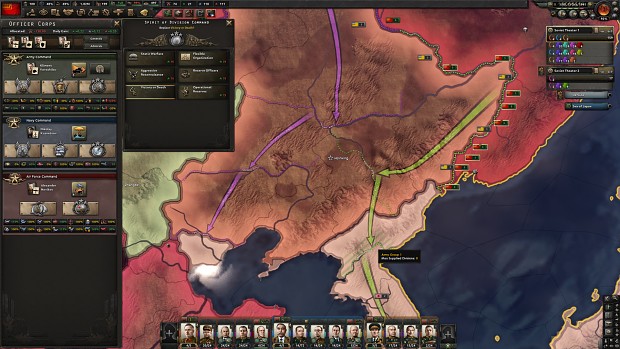 War of the World

With a healthy modding community and active support still in place, Hearts of Iron IV is sure to enjoy plenty more content in the future. As it stands, No Step Back is already very positively received on Steam.

To install, unzip into Documents\Paradox Interactive\Hearts of Iron IV\mod. The 1984music.mod file and the 1984music folder go into that directory.

Also, Oceania flag is wrong. It should be a black one with INGSOC symbols, instead of the british one.

And Eurasia flag is depicted not the same as here.

Are the supertanks, floating fortresses and rocketbombs ingame? Also, are those pre-1984 countries, like "Revolutionary SSR" cannon?

- Updated to 1.5.3 "Cornflakes". Better usage of the free patch features (ie decisions) to come in a future update.
- Completely reworked Totalitarian and Resistance national focus trees.
- Added a new Grand Council event chain for Resistance countries.
- Added DMZs along the Eurasia/Eastasia border in order to encourage the AI to use their full forces against the free coutnries. These DMZs disappear when those nations go to war, but the AI will continue to ignore that border until gets nearer to 1984.
- Adjusted a few borders and readjusted accompanying factories & resources.
- Added a 5th starting research slot to the totalitarian states on the standard bookmarks.
- Free nations don't share research until they form a faction at 75% WT.
- Added a "Partisan Group" division template to free nations.
- Added light armored divisions to Free Africa and Arabia.
- Reduced starting stockpiles moderately for the free nations.
- Reduced number of starting special forces divisions in all countries.
- Reduced infrastructure on the East Coast USA to more accurately represent a nuclear wasteland.
- Ashland is now Thirteen Sectors, their capital (and Oceania's in the standard bookmark) is now the Cheyenne Mountain Complex.
- Moved 'The Brotherhood' to a new secret lair that you could feasibly conquer at some point, although you'll have far more pressing matters to attend to before you should try it.
- New loading screens.
- New bookmark entries for Resistance nations.
- Added Free Africa cores to Oceanian territory in Africa.
- Some other tweaks here and there

- Added armor and aircraft graphics
- Updated localization with the real-world nomenclature (I was initially against this but I think most would appreciate it over fictional terms or generic vagueness.)

This version is save-game compatible with 3.1

- New flags for all free nations
- New leader portraits for all free nations (I'm finally happy with them)
- New flags and colors for Oceania, Eurasia and Eastasia (in the merged bookmark)
- New cosmetic tags w/ accompanying new flags for free nations once they reach a certain point in the national focus tree
- Added some starting generals to the totalitarian nations, they are currently straight out of vanilla HoI4 and are placeholders
- Removed starting fortifications for free nations if they are controlled by a player (AI free nations will still get the forts. Player-controlled nations will start with the fortification economy law, instead. Build your own damn forts!)
- Added world tension / date requirement to "Liberate Oceania, etc" focuses to prevent wackiness in MP
- Reduced % of consumer goods factories for free nations to make up for their precious missing forts
- A few other balance tweaks

Maybe Eurasia and Eastasia might get a bit different variations of Oceania focus tree? Just a suggestion.