Today you can say that go-mod is back! After 8 years without having new content in this mod and last updated in 2012 by user47, with effort and dedication we managed to update the creation of RangerC and HLMODER, that's how it was born Go-Mod BTC (Fix for steam versions can be found in the article under ATTENTION)

IMPORTANT: go-mod BTC and go-mod beta 2 uses dlls for shaders effects, apparently this dll produces VAC BAN if is used on protected servers, therefore, it is recommended not to enter, create or use multiplayer servers in this mod and limit your gaming experience to singleplayer.

Go-Mod is a half-life 1 mod based and inspired on the famous sandbox Garrys Mod, with the idea of ​​having the closest thing to a garrys mod but in Golden Source, created by HLMODER and RangerC and released for the first time in version 1.0 on May 19, 2009, and last updated on October 21, 2011 in version 3.4. although there was another update created by User47 called Go-Mod 3.c on Jul 15th, 2012. and that's how I Chernobyl_Luck decided to update this mod, but I could not alone, I am not so good at handling a mod as incredible as this alone, so I decided to form my mod development team called Half-Life Generation Alert Team consisting of the following members BlueNightHawk, LIL-PIF, Oven7sive, Solda

And that's how it was born Go-Mod: Beta Two Custom or Go-Mod BTC and why does it have such a strange name? Well, I did not decide to continue from the last version 3.4 or 3.c, I decided to update it from the Beta 2.0 version created on Jun 30, 2009, is where the name "Beta Two Custom" comes from, and why in a beta version did I start? , I decided to start from this version since the source code has more interesting things and a wasted potential which with effort and dedicated time can become a great return of this mod. I must say that some things were added of 3.4 and 3.c so it is also a mixed version

Go-Mod BTC V2.4 and 2.3.2 Changelogs:
+Added new keys in config options
+Objects held with the physgun can be rotated and can be pushed further or pulled closer to player.
+Objects held with physgun do not go through walls anymore.
*Bugfixes

NOTE: when fixing this for steam, the arrangement was too silly :p , and please no activate in settings waters shaders and shadows please, in case you did put in the console the following 2 commands: shadows 0, cg_water 0, thanks for your attention 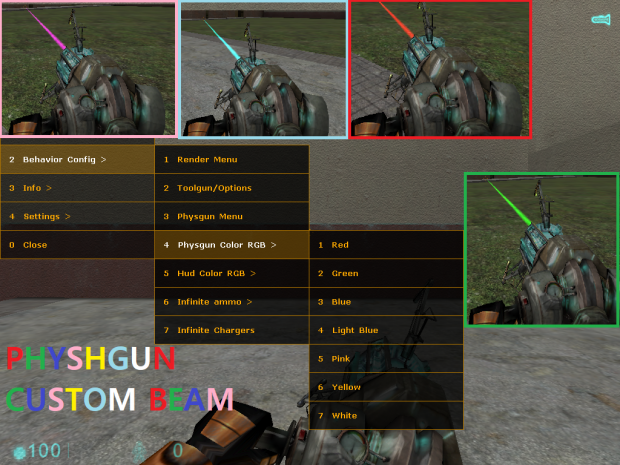 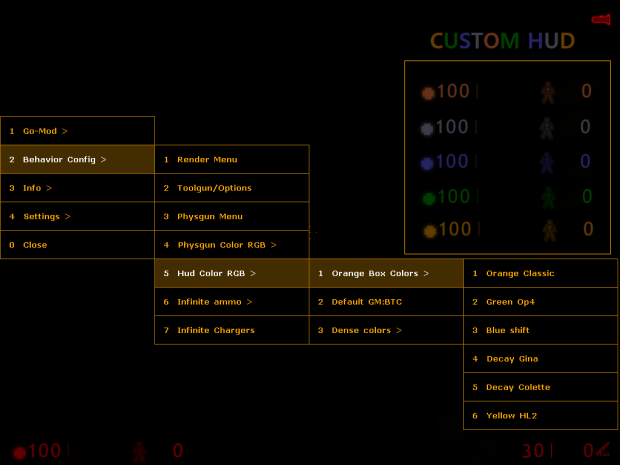 I put the corresponding credits of each thing that is in the mod, for example add models of some addons of half life and I leave your credits, plus the authors of zombie models (I copied the credits of the user47 post of go-mod 3 .C) 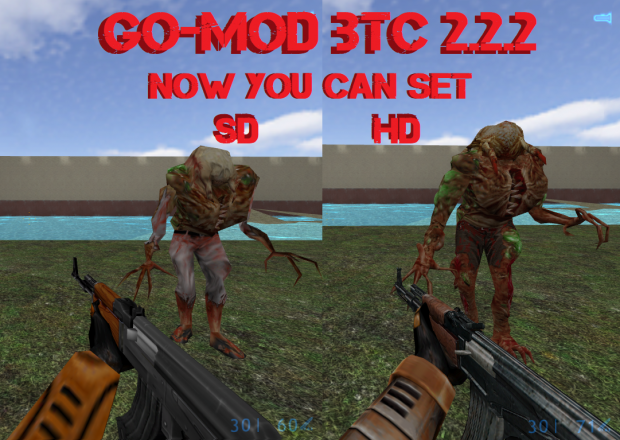 You have a Nice day and remember HAVE FUN!!!

If you are curious and want to try versions below 2.0.0, remember to put the following 2 commands in the console before starting to play: "shadows 0" and "cg_water 0"

What will be added

The list of changes to come in Go-Mod: Beta Two Custom

the channels of youtube from devloper team. For view previews and gameplays experimental

Info of the proyect, please read all before ask! :D

this is a very smaller update, without changes in code!

New Fully version of Go-Mod BTC, please read the description to find out about the new changes.

New version with new and improved Physgun. Instructions on how to use it is included in the text inside the zip file.

When I go into a game, it flashes white but when I pause, it has normal vison

does the mod work for non-steam?

Glad to see this still being worked on! Good stuff