GamingMarine in Doom is a satirical mod that asks the question, "How insane can a mod about its creator (Who is also a YouTuber) get without making everything overpowered?" In this mod, you play as GamingMarine, the youngest marine employed at the Union Aerospace Corporation, fighting in a war against a non-human cult known as the Master Force. This mod includes a 16 year old with a Duke Nukem-esque attitude, a female cacodemon you can summon to fight alongside you, references to various classic arcade games, and plenty of easter eggs.

When I started GamingMarine in Doom nearly four years ago, I didn't think that I would be able to make it take off in any way. While that was obvious with what are now known as the Legacy builds, the rebooted version got a little bit of publicity. Not too much of it, mind you, but enough to encourage me to keep on going (Even if some of it was just to bash on the mod because the people who found it can't be bothered to do their research for five seconds). After nearly a year of the mod being in Early Access, that is subject to change this Halloween.

So what exactly makes this new build shine?

For one, enemy A.I. is now completed. The only enemy that originally didn't attack the player in any way for at least a year (Which replaces the Spider Mastermind) now shoots missiles, Excessive Force bolts, and assault rifle rounds.

Secondly, an issue that had plagued the mod since its GitHub days has finally been fixed; Boss triggers (Namely the ones in E1M8: Phobos Anomaly and MAP07: Dead Simple) now actually work. Take this screenshot as proof. Note that the walls lowered, even though the remaining enemy was killed with a fire-based attack (This would normally cause the trigger to not function, disallowing the player from proceeding to the end of the level without using cheats). 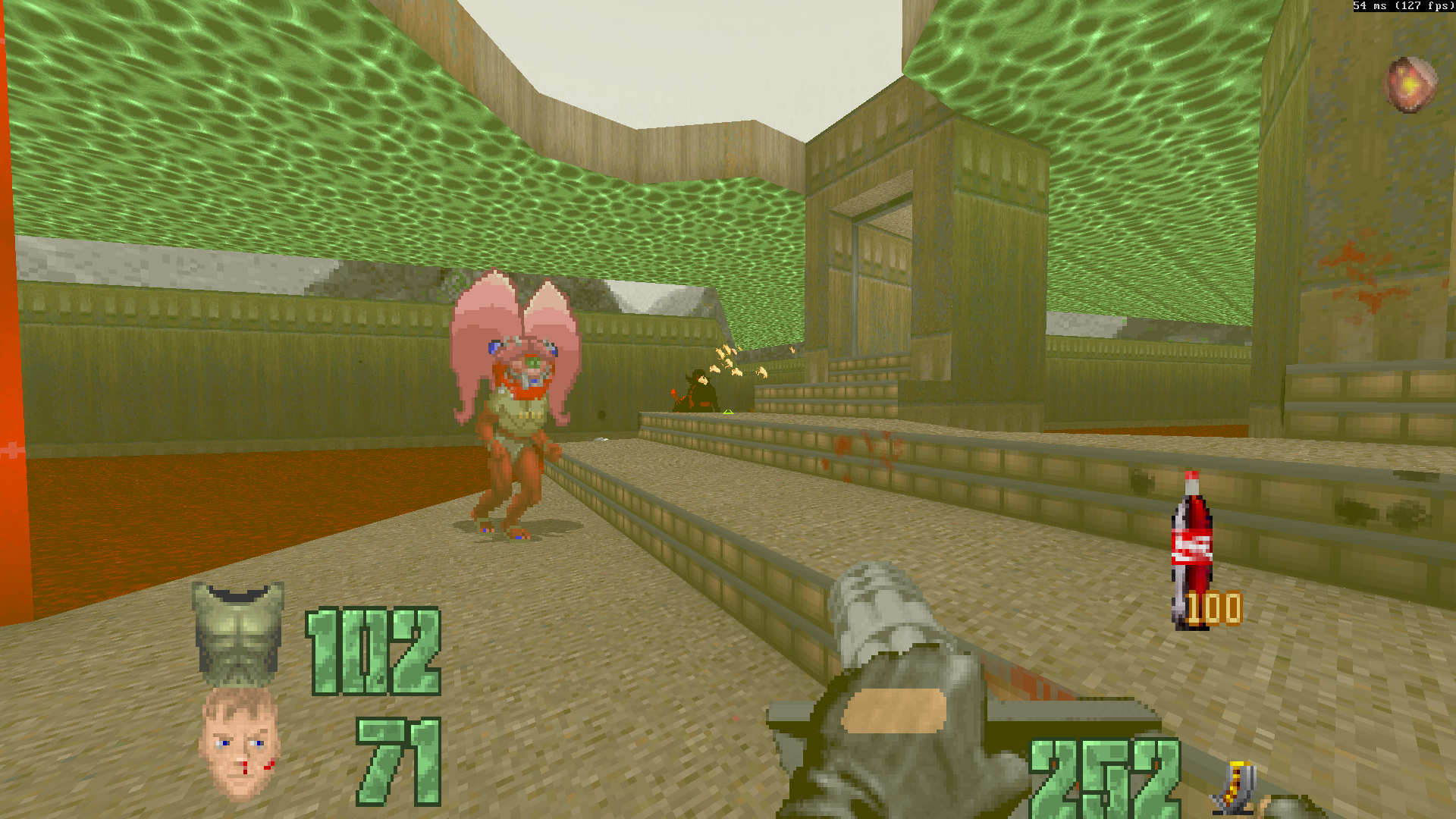 So what's in the future for this mod?

From here onward, any further development on the base mod will be bugfixes or non-gameplay changes. I will be putting all my focus into the mod's expansion/level pack, Tales of the Lost Kaka Village (Please refer to the trailer at the start of the article for details on this level pack).

That being said, I'm glad to have finally finished this mod. Come Hell or high water, GamingMarine in Doom's first true build will drop on October 31st, 2020.

More changes in code and cosmetics! What more could you ask for?

GamingMarine in Doom gets an Update!

Despite what I promised last month, the second public beta for GamingMarine in Doom is now available.

Taking a break due to recent real-world conditions

Only a single public beta release and ALREADY a break is being taken? Yeah, unfortunately...

v1.1.1 is a minor update to the previous update from last week, improving on what's already been established, as well as a sneak peek at what's to be...

The third official public beta for GamingMarine in Doom, full of more changes in balance and cosmetics.

It's a fપcking criminal offense to put Caleb into one of those pony, why in all g*ds name did you do that? For such insolence you deserve barrel bombings!

is it compatible with zandronum?

It should fully work with Zandronum. However, certain sounds will not play due to the method I used for converting audio to OGG format. Perhaps a later update after the mod leaves beta will fix these audio issues?

Huh... Never knew until now that this was the mod that had the head sprites used in old FreeDoom. They where kind of odd to look at, from a first glance, but at least they still have care from you. :)

Where is the Credit?

At the current moment, the mod doesn't have any credits, since I'm still changing things up. I'll include a list of credits once I consider the mod finished enough for a proper release.

Lighten up, skdursh! We allneed a good lol now and then. Btw, this mod is funny!

I found this mod quite different and funny.