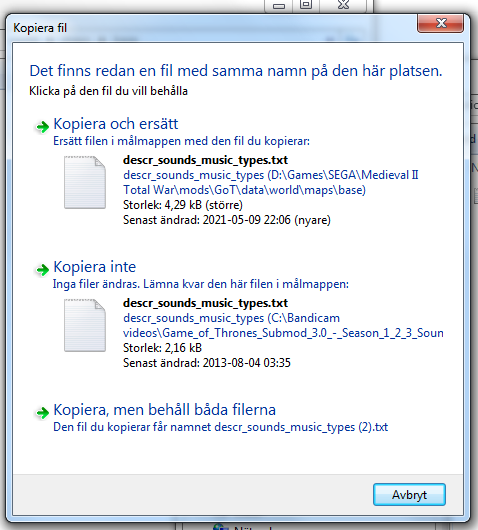 Edit: Re-download this if you are among the 12 people that have already downloaded it - as the descr_sounds_music_types-file had an error/mistake in it causing a crash at turn 378.

The music sub-mod patch has been updated for the new giant map of version 5.6 - including for all the new additional factions.

Patch to make the mod compatible with the Game of Thrones soundtrack. This only contains the files required to get the music working and does not contain any of the retail music.

This is what you need to do to get the awesome music to work:

5. Rename all the songs to numbers from number 1 to nr 67. Don't touch the two songs from the music mod that followed with the download.

6. To be secure- delete the event.dat and event.idx-files inside of your sounds-folder together with the music.dat and music.idx-files. Add these files from the downloaded folder inside of mods/GoT/data/sounds. The music-files will regenerate when you start the game after you have placed the music inside of the music-folder inside of sounds - if you do not have a folder named "music" then create it. It will need to be placed in data/sounds/"here" and it needs to be named "music" - this folder will need to have the 67 songs renamed to numbers.

Edit: This one is compatible with v 5.6 and future versions.