2011 release renamed to: G STRING BETA. The Dec. 19 2011 release is now referred to as a beta release- read the mod's "news" to see why. Download the beta in the mod's "downloads" section. 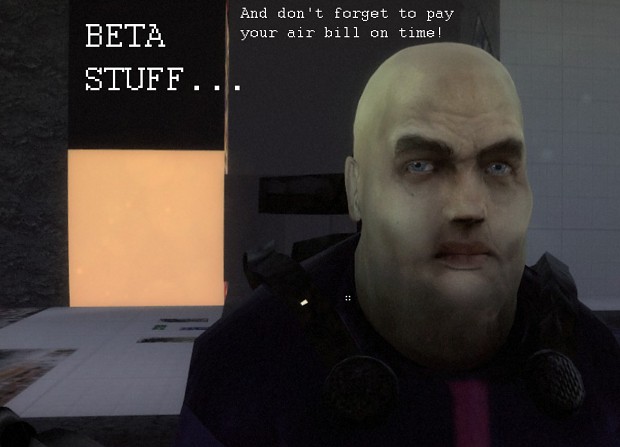 Yup, also check this out, I haven't seen many of these maps:

Damn, Half-Life 2 used to be more creepy than the first one.

I had multiple crashes that put me away from playing for a long while in that area with lots of bots and that electronic impulse. It was something like a highway or tunnel full of trashed cars, and, well, the haywire bots.

The fabled "No-chin man", I bet he has a stack of fedora's in his room somewhere ;)

"Oi mate, you gotta license for that air?"

How about fixing the sounds of the weapons?
The shotgun, smg, rocket launcher (not the rocket itself).

When an enemy or ally fire these weapons they sound like they are right next to you even though they could be really far away.

This is not just awfully loud and annoying but sometimes makes it difficult to locate where an enemy is.

If I remember correctly you once said to me that this you already fixed a long time ago.
So an update for the "beta" would be awesome!

Also I have installed the beta on my system and I have set things up so I could make some improvements to the 2011 release relatively easy and quick so if you guys want anything fixed I can give it a go.

Nothing huge of course, that's what the final release will be for but you know, if some textures are off, (some reflections look weird to me on the youtubes) or weird glitches, if you get stuck somewhere, things like that.

I am slowly re-uploading the beta soundtrack to YT, the original songs that is... Sadly many playthrough makers removed the whole soundtrack because it has also copyrighted songs so it's understandable- even though it kind of ruins the mood of the mod...

When I am done digging them all up I'll mix them into a seamless album and release it for free.
Youtube.com