RSS A Hunter Fell for Me

Today we show off a pair of renders of our new Fallschirmjäger playermodels, which will be taking over from the placeholder Heer models on maps like Crete and St. Lo. 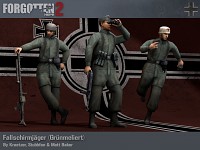 In 1935, the Soviet Union performed a series of training manoeuvres that included an impressive display of parachute deployed infantry. Hermann Göring was one of the international observers, and took these ideas with him back to the newly formed Luftwaffe. Started as a volunteer battalion in early 1936, the Fallschirmjäger were formed into their first division in 1938.

The first opposed airdrops took place in the Invasion of Norway, and were soon followed by the stunning capture of Eben Emael in Belgium. The culmination of the large strategic airborne operations of the Fallschirmjäger came in the Invasion of Crete, which despite being a victory came at a great cost of life. 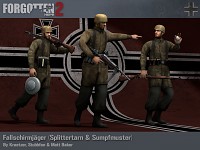 As the war continued, the Fallschirmjäger would act more often as elite infantry, and by 1944 new units were no longer receiving even the most basic in parachute training. Distinguishable from the average infantryman by their distinctive unbrimmed helmets, you'll be able to see our new models on maps such as Crete, Purple Heart Lane and St. Lo thanks to the work of Kraetzer, Stubbfan and Matt Baker.

When will be the updates available?