It has been a long time coming, but we're finally dusting off the last elements of the mod that are unfinished or unpolished in some way. Our release will certainly be a BETA, in that a few things will be left to adjust based on mass player feedback, but in a state of completion that I doubt most people will ever notice anything missing. It's just bugs you don't catch til 5000 people play your project in a weekend and all report the same unexpected things! :p

The big one at the moment is getting players who turn hostile in Vault 18 back on course. If you start punching random people in the face (you don't have a weapon yet) a security guard is supposed to run up to you, talk you back into being neutral, OR, arrest you and send you to jail after tapping you with a stun gun. That last part we're leaving out during BETA just because it disrupts too many scripts (maybe a modder can implement that later -- I added dialogue to key characters and voiced them to bring up the fact that they found you in jail.) Right now Mark never greets you because the AI can't find you in time, and the script to place him nearby no matter where you are is unreliable, letting players murder their way to a broken and unimpressive game. (Just don't do that and you'll be fine.)

After that is final balance adjustments. FNC is a hard wasteland. Dry desert, low food resources, not much water -- and what resources there are tend to be camped on by rich and desperate cities.

So the food and stimpacks you manage to cram before leaving Vault 18 are pretty much it. After that, you enter the desert and you're scrounging, with traders charging a markup during wartime price hikes.

Right now I think it's too easy to be a packrat. Our Raiders are well stocked with ammo (they have their own manufacturing and saltpeter production in the Uranium mine which was stocked with ammo by the Survivalists before the Great War, as well as stolen Enclave gear and supplies raided from the NCR and smuggled in by the Bishop Family -- they're stacked.) The NCR player has an easy time of it pick up Raider gear. Stimpack rarity is right where it needs to be for Hardcore mode, not so much for Normal. On normal the 25-30 you leave Vault 18 with last for days.

We need to get the NCR Doctor working, as well as the Tribal Doctor. The Raider doctor works just fine.

The NCR Doc was supposed to be a crossover with The Frontier, but they never spared us the 30 minutes to write that, so he's just a generic doctor vending machine now. Which of course, doesn't work. Thanks guys.

We're patching in an update for Non-Violent players, or players who try to avoid personally killing people for any reason. You do have to assist in the deaths of people, so there is no Quaker mode, but you can get close to it using companions to do your dirty work and helping behind the lines using Science. That meant patching in alternatives to combat, rigging up some conveniently placed technology and parallel quests. That's posed some interesting problems, as the Engine fights us at every turn.

The missile launcher won't let us detonate an explosion on the horizon because it's beyond 8000 units of the player, where scripts just stop working, and the Bethesda guys worked around this at Megaton, and Obsidian on Lonesome Road's nuke scene, by hard coding it in the EXE. (At least, we think.)

We can't violate the EULA for a simple shtick, and we're not going to start using NVSE (3rd party script extender) now, when we've never used it for the last 7 years. We've always solved our problems with our own ingenuity. Which is the purpose of the mod -- to learn this all ourselves so we can make our own games.

But, once that challenge is overcome, that will address the last of the serious revisions!

From here on we'll switch over purely to bug fixing. Mark in Vault 18 -- he's top priority to get hostile players back on track. Then it's balance. Then it's anything that crops up in last minute testing the next 20 days before go-time, like ensuring all our existing triggers and scripts work as intended under unexpected circumstances, or adjusting confusing moments in the story (failing the Enclave quest because you failed to radio in while you were being shot at? Lame. That should just wait and signal you on a cycle, and if you complete the objective without being told, just update the quest instead of failing.)

I have to quickly replace the ending videos that show a key character because her entire body has now radically changed. :p It'd be great if Gamebryo has real camera controls so all our cutscenes could be in game, BUT, no such luck. So I set them up in the editor, record them in game using FRAPS, then bake them to a BIK file using freeware tools. It's a little less elegant and obviously, if you need to change a character's entire appearance, very frustrating. But it's worth it because she's... way more badass now. 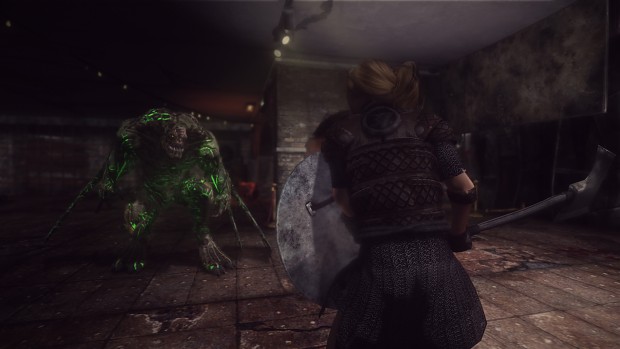 No one will ever notice THAT discrepancy!

Finally I have Voices that are missing to fix, one last time. After 3 straight years editing or recording voice acting, replacing dialogue that was old and stale, or just fixing lines that went missing or were added, I'm finally at the end of the ocean! 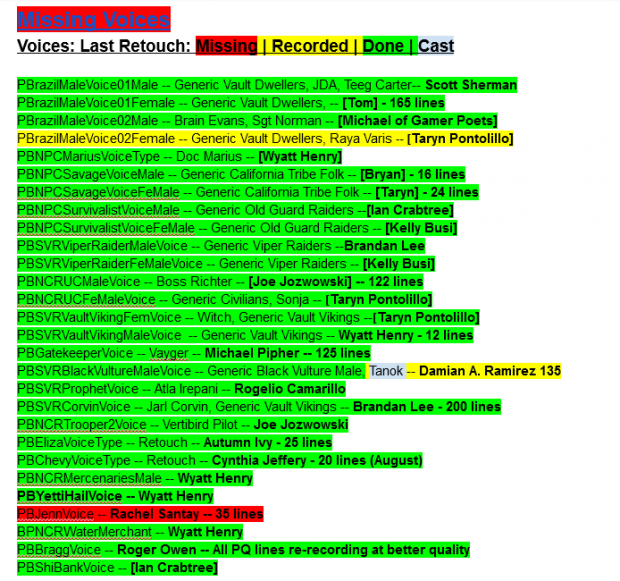 Taryn I need to re-record her Vault Dweller. Her audio had a lot of room noise and just needs some sound mitigation to reduce refraction. It's a 2 hour recording, 3 or 4 hours of editing, and we're done. If I have another female voice actor to do the 01 female version I'd like to do that too. Right now it's mostly silent for barks, and just patched in the holes with Taryn.

Damian just needs to get time free to record that last little bit. Then we're done.

Rachel I need to FIND. She vanished off the face of the Earth. Not responding to email, Facebook is deleted, phone number changed, Instagram offline... is she in the Witness Protection Programme? WTF?

It's just 35 lines of revisions and a few that were added last minute. Dialing in some emotion that didn't sell, and some holes to fill. Or... if all else fails, recast, 500 lines of female character, (my 4th time doing this character! D:) and quickly edit her in. Painful for me, but, if again, if I have a female voice actor who is really good at what she does, (top quality mic, whisper room, good voice, takes directions by phone,) so I would accept that.

All the rest of our voice work is done! :D

Finally, our Discord is open! :D you can get tags for in-game achievements!

You're all free to hop in!

You can join the server and help us out by beginning to test delivery methods and selecting testing teams for that. Most of you will not be selected for testing, because we're focused on people who can actually help us get shit done and not play it quietly themselves and ignore any bugs they find and never tell us (you have no idea how infuriating that is.) And, for security, since this close to release people just want the files early and will not be above joining the test group and then releasing them.

The last of my major tasks are:

Then, we are ready for launch. All we have left is to dust off, pack up, and release the files on release day.

With 30 days left I should have plenty of time to finish my list of work in the mod and also do the release work on the deliverables and websites.

I've planned to give ourselves the last 10 days before release to focus on telling people what we are doing and get the press up to speed (we started in 2012, not 2010!) and lend ourselves "Oh Shit" time in case anything has gone awry. That way if we need to make a change, we have time to do it.

We also need that extra 10 days for our translation & localization team to make their own last minute revisions and test delivery via Nexus and ModDB.

And that 10 days gives me time to think of something clever for our Release Trailer too.

I have no ideas. :pI'm so creativly burned out on this project, haha. I want to start our next game!

I'll figure it our October 20th and just release something 3 days later, in typical Brandan fashion. 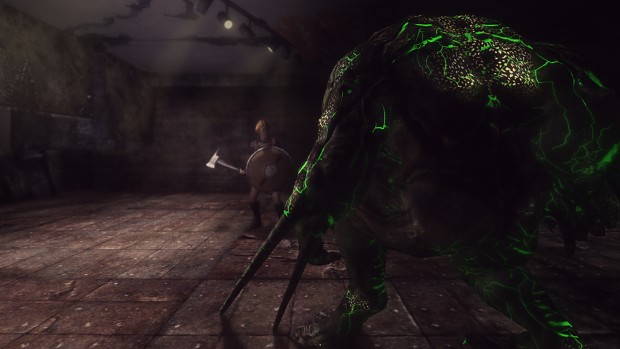 So yeah, there we are. The last September update after 7 years of work!

Next month, we go live!

"Next month, we go live!"
Next month you guys put Bethesda to shame.

looks like another 3-4 years without buying another Fallout game, you guys are doing god's work

I wait this more than Fallout76 !

It's been a long time coming, looking forward to it!