This is an extremely ambitious project but one that we believe truly needs to be done. The good news is, this isn't our first rodeo. This project initially started after the release of Fallout 3. Due to time constraints and lack of volunteers the project was inevitably put on hold. However, some of the core team are back and prepping for work on Fallout 4 once the tools are released. We are currently working in Skyrim with our prep work in order to be utilizing the most recent creation kit that is likely going to be similar to the Fallout 4 creation kit once it is released.

The goal of this mod is two fold.

Over the many years we have seen there is a desire to redo the original Fallout and Fallout 2 with the new Fallout Engine. There have also been a few projects that have attempted this and stalled or died. However, we think it is important for new fans to see where it all began and see more of what really makes the Fallout genre great. We know a great deal of people do not have the interest to go back and play the game with outdated graphics and game play mechanics which is why we are going to bring a more updated version to the community.

Now with several years of various experience under our belts we are retuning to our passion project in hopes of realizing our goal. While we are initially keeping the team small, we will be looking for help. So if you are a modder with experience in the creation kit, a modeler who has working knowledge of nifskope, a talented voice actor or anything else we would still love to hear from you.

Well it has been several years since there has been any new news posted, but that is changing. This project has been a dream of mine (Dakcenturi) for years. I started it back when Fallout 3 was released and continued working on it into Fallout: New Vegas. However, there was a lot of other things going on at the time. A year before the project started I was married and shortly after my first son was born. As you can imagine these were some pretty big changes and it ate up a lot of my free time. I tried finding more help to fill in the gaps but it just wasn't working and then the project was put on indefinite hold.

Since then, I've gained a lot more experience as a developer and producer. Recently while looking for jobs I put together my design portfolio and Fallout 2161 was one of the topics. I always hated stopping this project and always wanted to return to working on it. Now is that time! With my family life settled down and in a routine I've decided to revisit this project and work on actually completing it this time around. So here we are.

As you all know (unless you've been living in a Vault for the last several months) the most recent game in the Fallout franchise, Fallout 4, has been released. Luckily with the work we completed before, very little is reliant on the specific engine. You may also be aware that Bethesda plans to release the construction kit for Fallout 4 *sometime* this year. This is bad and good. The downside is we can't just jump right in and start working on the mod. The upside is we can get some solid prep work in ahead of time which will let us jump in much quicker once the tools are released.

So now you may wonder, where are things currently? First up, I am re-teaching myself the creation kit. It has been a few years since I've really dug into it so I need to brush it off and re-familiarize myself. Second, we are organizing our project so that as we progress we can stay on track and if we pick up any additional volunteers we can more easily assign and delegate tasks. This includes cleaning up this page of old, outdated images and videos. Finally, we are currently working on our height maps for the game.

One big change from the philosophy of the original project is our intent to not only recreate the classic Fallout but to also add to it. As such, rather than simply having small areas to match the original locations we are creating game regions to allow a degree of the open world feel that is common place in Bethesda games and one of the things that make them great. To that end let's look at some of the progress on the height maps.

First, it's important to look at where we are coming from. For this we use the maps from the original Fallout and Fallout 2. 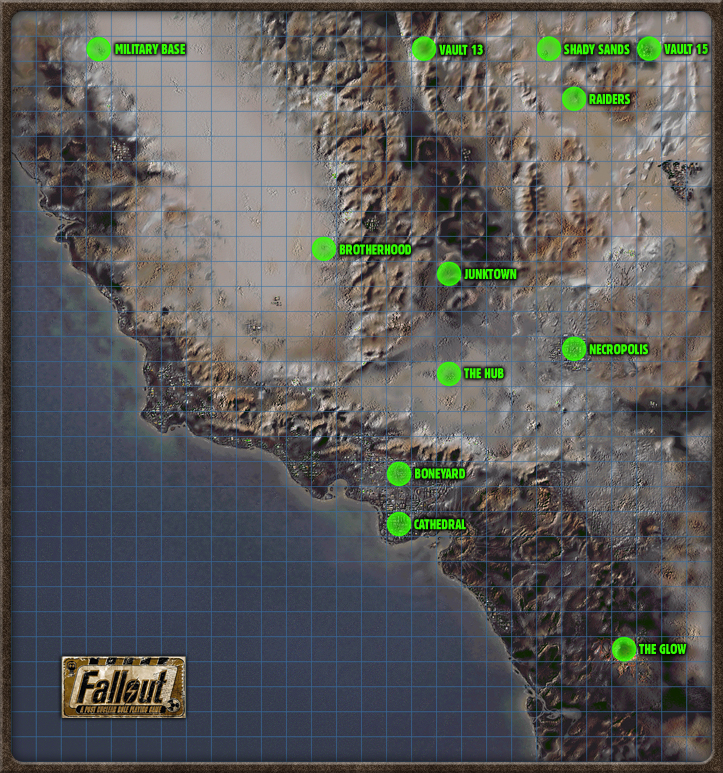 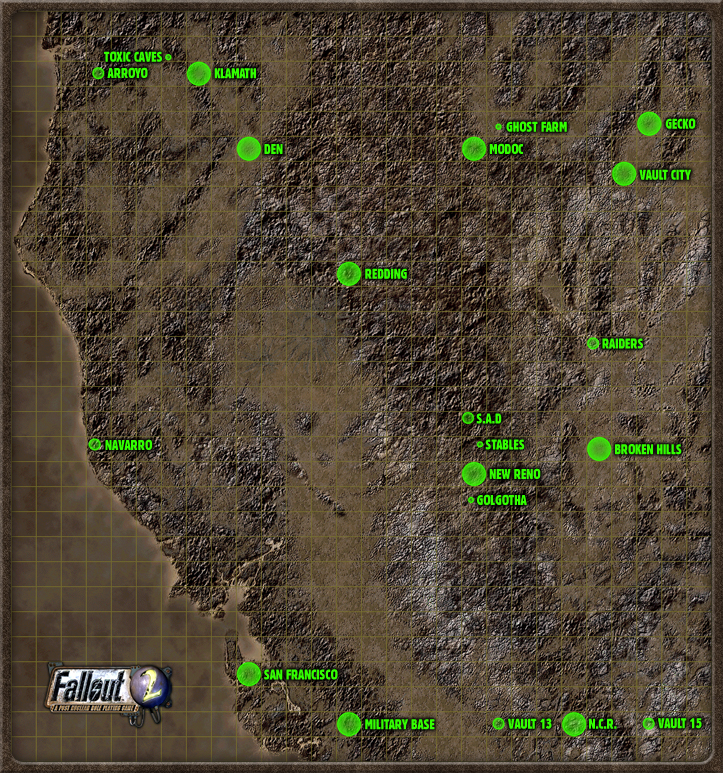 As you can probably tell there are some discrepancies between the two maps and the locations of Vault 13, NCR (Shady Sands), and Vault 15. After a lot of research and design decisions we've worked up our own map of the original Fallout. This will be one area where we stray from the original that won't have a huge impact on the game itself. (NOTE - This is still a WIP) Aside from making the locations more accurate to their originally intended design, there are other things influencing our decisions including new design work and most importantly limitations of the engine. 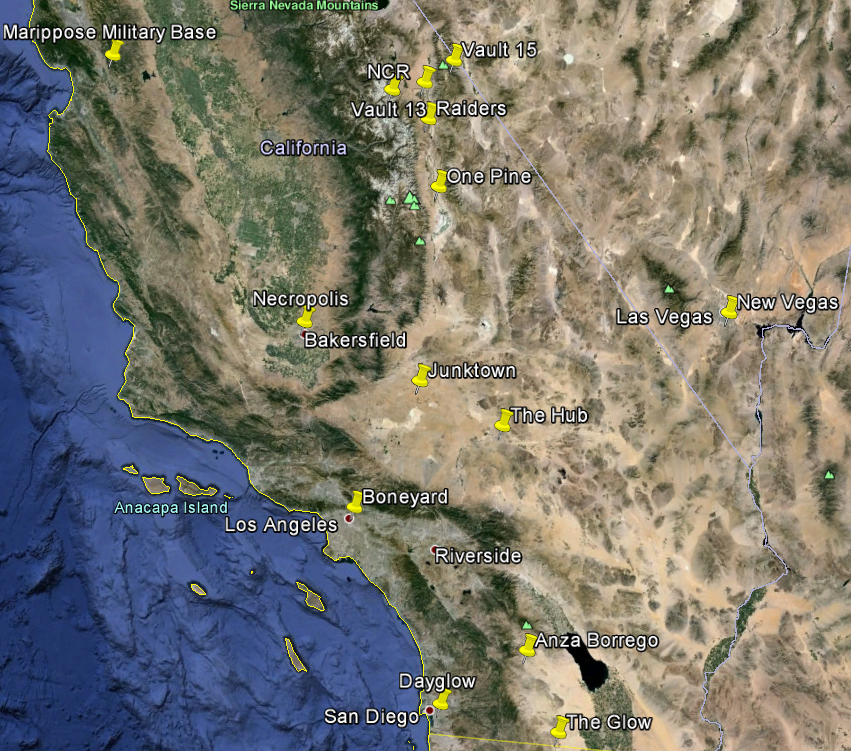 From here we are using GIS data to generate height maps. This is a somewhat convoluted process and we haven't gotten the exact results we are looking for, but we are getting close. Here are a couple of images that show some of what we are working on: 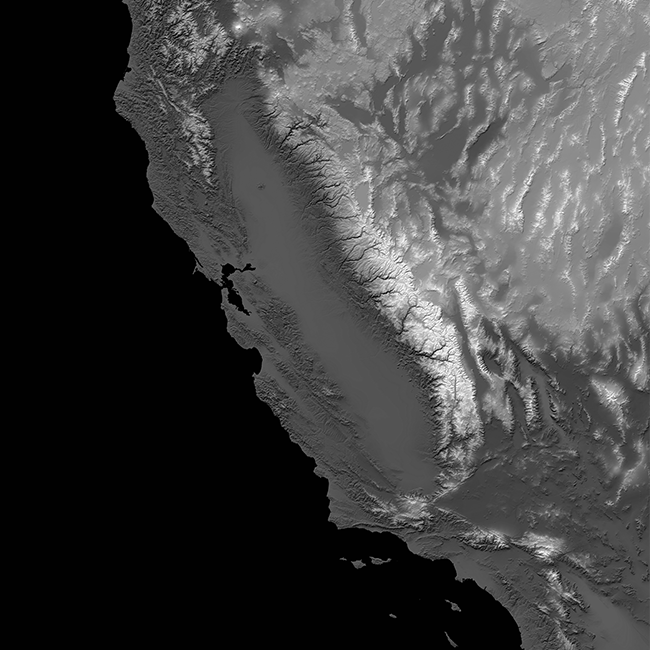 The original goal was to just make California and part of Nevada as a whole. Obviously, with a small team this would leave a LOT of open space with nothing of interest. Add to that limitations of the game engine and we changed our plans to subsections of the global map. However, this overall world is still going to be important for our Fast Travel system. 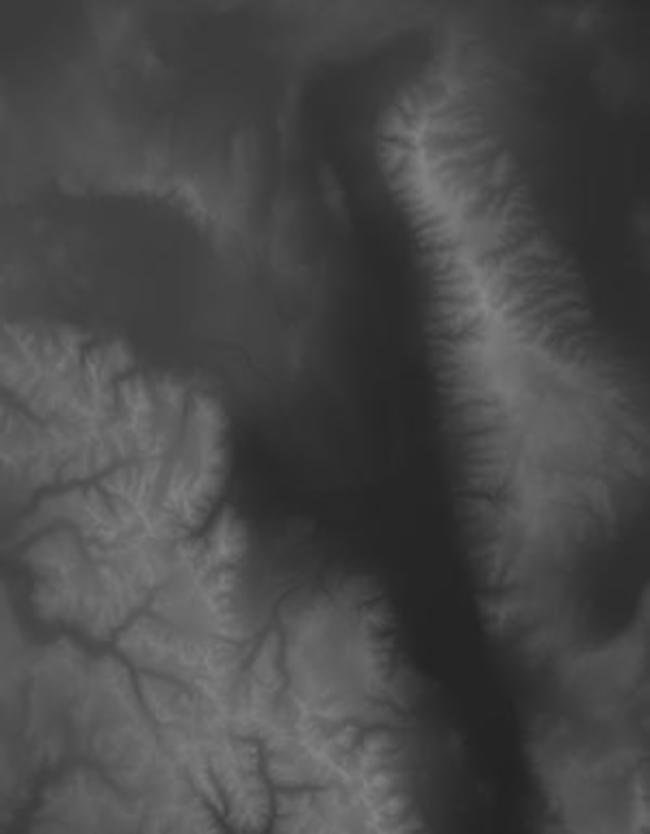 Once we have gotten the results we want repeatedly we will be writing up a tutorial for others interested in creating their own mods based off of real world locations. There are some great tutorials out there but they are outdated, missing images etc. So we will put together something updated and ready to go for those interested. We are using the Skyrim creation kit in order to test out our work since this is the closest engine to what we will be using in Fallout 4. As such, look for another update in a month or less where our goal is to show you some in game shots of our terrain in Skyrim.

...Although after 4 years without an update... I guess the project isn't running anymore so...

Hey, I am the project lead for Project Arroyo, and I'd like to talk to you guys about your project. My discord is DocWhite#9295.

It is possible to bring back skills! Just take a look at this mod: Moddb.com

Awesome, I was hoping someone would do this

What an awesome ideal, I loved the 1st Fallout game & although I got KIA'd a lot, it was total fun for me. So I can't wait to see what Fallout 1 will look like, after being upgraded to Fallout IV stats.

Followed. Hey Centuri, and new news on the mod? :)

this NEEDS to happen