Gameplay related mods and mini-mods, which can be merged in with ZRP or other bigger mods or modpacks.

Thanks for voting and helping Exoz Zone Additions on it's quest to become the 2022 Mod of the Year. You are now in with a chance to score some free games from our #modlove collection. Help this mod secure more votes by embedding the widget (or link) we have included below on your favorite sites.

!!!!! IMPORTANT: If you have the same suit, and you are upgrading it the same way as your other one, it might disappear! So don't hold 2 same suits in the inventory, either drop it or store it in the stashes before upgrading.
After upgrading, the suit is removed from the main slot, you need to equip it again.
The author of the original mod said that sometimes you can get negative money, but I personaly never experienced that.
To prevent any other unexpected bugs/disappearances, it's smart to save before upgrading.

1) Fixed crashes
2) Missing suits (military armored and ecolog green) added
3) Removed low rank suit upgrades (bandit-novice-dolg-freedom light-monolit-killer outfits), because it was rather unrealistical to upgrade such stuff,because it is cheaper to buy a better suit. Plus, mechanics don't want to waste their time for something like that, right? These suits can still be repaired.
4) Changed upgrade conditions (you don't need to repair suit which is in perfect condition before upgrading anymore)
5) Repair price is lower
6) Translated and added missing texts in English (PSY protection is telepathy in vanilla, you can change it into PSY protection by editing text files. It also seems to be misaligned in inventory, but that is vanilla bug, as no suits have telepahy protection in vanilla). 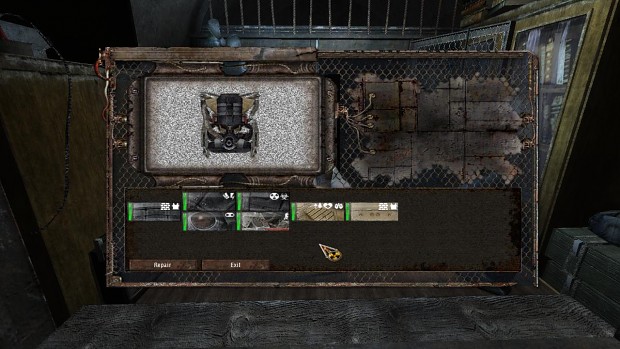 ui_icon_equipment is from ZRP 1.07, so there is no need to merge in icons for that.

This mod is really easy to merge in with anything else, as it does not include any lines in bind_stalker or any other scripts, which are often used by other mods.

You can change the NPC's who have the repair/upgrade dialog, so you can create new important NPC's, and make them mechanics, instead of having traders repair everything.

Included all.spawn can be used to test suits, it spawns them in the inventory, and actor already spawns with 99999 RU. Don't use this for real game. There is no need to merge all.spawn, as it does not include anything else, it's there just for easier testing.

This mod let's you upgrade and repair suits in game, at all traders. You can change it to your preference, and include it in your mods. Original 1.0 author...

Dont be an impertinent

Hope I can still ask this but how do you install this with Stalker Complete? I'm having trouble figuring out the whole merging thing and I am clueless on how to get it working right.

Whenever I load a save with this mod in it, my game crashes. I have not been able to upgrade any suits, because I will die and cant reload the save.

How do i merge this with ZRP?

Any chance a version can be made for L.U.R.K.?

What patch do i need to use?It crashes in 1.00005 when i load a safe,im not using other mods,just this one.

That will make it work with 5th patch. if you use mods that are not specifically designed for the patch that you use, you always need to change this!

Also, when you are done with it, you need to start a new game.

This is just what i need