A weapon mod for the original Doom games that attempts to faithfully recreate the weapons, items, combat mechanics, and upgrade systems of DOOM (2016) using GZDoom. Compatible with most monster packs and mapsets.

please keep in mind that the resources and sprites made by me and KatoKiyomasa are exclusive for this addon and this addon only, if you want to use any resources/sprites please consider asking for permission first

this mod features almost all the weapons from doom eternal expect for the chaingun, double dash ability, blood punch, shoulder cannon, crucible, Quick chainsaw swing attack, custom user interface.
please make sure to check all the bindings in eoa settings/options and bind all the weapons, default bindings are similar to doom eternal, and adjust the sliders in eoa settings to move the display for the blood punch and ddash cells to put them in the correct place on the screen.
this mod requires latest version of gzdoom (4.3.3+), or dev version of lzdoom (not sure if it works, as this mod was made with gzdoom in mind, i did not test it in lzdoom), this mod DOES NOT work in zandronum.
please keep in mind that the mod is not finished and there are some stuff to be fixed

-new SG sticky bomb and plasma rifle (with mods) sprites, and rocket launcher (in the next update)

-more stuff that i dont remember 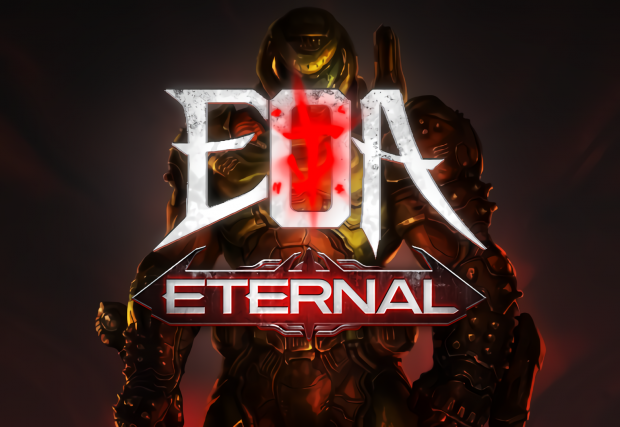 this is godly nice

This addon is AMAZING. I suggest everyone to try it.

When you equip and weapon mod it shows DOOM (2016) sprites and not DOOM ETERNAL ones.

How is it "unnecessary." I can’t play like that then, I constantly change weapons modes, but for some reason they didn’t create an animation for switching modes

i enjoyed this, when can we expect a remake on this?

i mean new update, its great addon but i noticed some problems with certain weapons.. i enjoy this addon

bro, I'm not able to play the mod, he keeps saying that there are 21 script errors, do I have to use gzdoom? because I'm using lzdoom, is there a problem with that?

it only works with gzdoom, iam not sure but i think it also works with the dev version of lzdoom

Are you using ZDL? and the two EOA files? you need to put EOA Assets above Code, i use Lzdoom too.

i think this dude abandoned the project.

it's not abandoned lmao

It isn't a bad mod (I really enjoyed it!) but it is unfinished, to the point where I tried putting some fitting mods to make it more lively (Doom Eternal OST, Brutal Doom monsters) but it still felt unfinished, will there be any future updates to it?

well, there isnt any more stuff to add, i added most of the stuff doom eternal has, weapons, abilities, hud, shoulder cannon, so i can only do little patches fixing common issues

There IS more stuff to add or fix...
- Eternal-like field drone sprite
- fixing Crucible (appears and disappears frequently in hand)
- updated text for weapon mods (charged burst is no more, why full auto is even called like that?)
- fixing grapling hook (doesn't burn enemies from time to time)

Just a quick question! How do I gain more chainsaw fuel? It doesn't seem to be obtainable. Awesome job by the way! Definitely deserves more attention.

once you run out of fuel completely, your chainsaw will start regenerating fuel, only 1 pipe tho, not 3

Thanks for the reply! When does it begin regenerating if I could ask? Doesn't seem to be at the start of the level. I'm probably missing something obvious.

sorry for double posting, i saw some weapons have sprite cuts, will it be fixed anytime soon? and when can we expect new version that includes the changes in mod like improvements and such?

It's on a cooldown like in Doom Eternal if you mean the side mounted cannon, keep an eye on the cooldown meters at the bottom right ala Eternal. If you mean thrown grenades, I'm not sure. I don't have a binding for that since it wasn't an Eternal feature, but I'm not the mod author so I could be wrong.

my grenade regen stuck and it wont go up
any help?

The add-on is in-kind beautiful, and you can even get the same feeling from Doom Eternal itself (though I did not play it, because my computer is weak) But as you said in the description of this add-on, it is still incomplete, and by the way I confirm this fact but sorry, really sorry (
I would like to know how much more development will continue until the full release?

Hey, i cant seem to get it to work. using the lastest versions of gzdoom and lzdoom. Im new to this, really want to try out this mod

please be more specific, what errors do you get ?

Remember to download EOA and in ZDL put Assets above Code.

NEW UPDATE, READ THE DESCRIPTION FOR THE CHANGE LOG

Really nice, I hope that the remaining weapons sprites get an update soon (BFG)

i do infact have a bfg sprite from doom eternal made by kato, but the amount of moving parts for the firing will ruin the sprite, because i only have 1 frame (idle)

This is a really great mod, it captures the feel of eternal and allows for truly endless gameplay with the amount of map wads out there. Here are a few bugs/inconsistencies I've found:

-The heavy assault rifle mastery doesn't seem to work since you can't get the headshots necessary.

-There is an immense FPS drop when using the heavy assault rifle's zoom, right after you shoot (I'm playing UAC Ultra with SGT Mark's Brutal Doom Monsters if that helps) sometimes. Maybe the first time you use it after you load a map. I'm not sure how to replicate this problem consistently.

-The flame belch animation plays twice instead of once and takes a long time, plus you can't shoot your weapon while it is deploying the first time but the second time it deploys you can shoot just fine.

-There is a delay between when you use the shoulder mounted grenade than it actually deploys compared to Doom Eternal, it should just yeet it right away

-There isn't as much of a delay for the ice bomb but it is noticeable.

-There is a delay between when you use flame belch and when you can do a glory kill on a staggered demon. It seems like you have to wait a second or so until you can initiate the glory kill. It could be due to the aforementioned delay in my above finding.

-if you reload the SSG and use the quick chainsaw after the sprite plays that he puts the shells in and closes the chambers, he will still reload after too, could we have a bit of leeway with that so it still reloads even if we don't time it perfectly? Or perhaps could you queue up the chainsaw attack after the reload is done? The same thing might happen during a glory kill

-the invulnerability powerup doesn't work in this mod for some reason, you still take damage even though it shows the hue of being invulnerable and is playing the background noise.

-A humble request if I may: could you make this mod compatible with Brutal Doom Monsters (it already pretty much is, but could you also allow for glory kills during their extended pain states [amputations etc.] and also the non-hitscan option compatibility so they shoot plasma with lower damage rather than the bullets which do a ton).

-The EOA settings menu appears twice in the options screen.

Thanks for all your hard work and passion, it is very well made. If you would like me to thoroughly regression test any future versions, I will gladly!

Ok so like the comment below (accidentally posted as a guest), switching grenade types while reloading the SSG will reset the reload animation, it actually does this weird animation when you have the SSG equipped. Also I figured out that the dual flame belch animation happens because I have it bound to scroll wheel, so when I scroll up, it must hit it so fast it triggers the attack twice and causes my equipped weapon to not work.