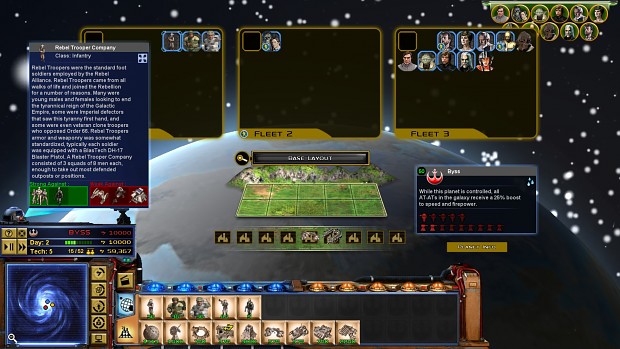 I'm sorry to say, but your description is invalid... the only way that clone troopers could have opposed order 66 is if they removed there special chip that forced them to follow orders... and if i remember, something like 5 were able to do this, but i love the idea

I've consulted a few people on this matter and the conclusions have been mixed... But according to Wookiepedia "Even some clone troopers joined the Rebels."

If everyone really prefer I edit that bit, I will. Please let me know what you all think.

Thank you and have a nice day,

Twenty-Four Rebel Troopers, divided into three squads of eight. Every Rebel Trooper is armed with a BlasTech DH-17 Blaster Pistol. They also wore semi-standardized Rebel armor, resembling that of the Alderaanian Armed Forces.

Costing more than Rebel Mercenaries, Rebel Troopers were more motivated, better equipped, and greater in number. If the fate of the Rebellion rested on the shoulders of anyone, it was these fine young men and women that fought the hard fight against the great Galactic Empire.