Destruction of Mankind is a mod about an alternate universe to the Red Alert 2 universe, where massive jumps in technological advancement occurred during an extraterrestrial war. This war was complicated and brutal, but during the process a new superpower emerged, and left one in the dust.

The Japanese Empire is the most advanced nation in the world. Their technology is unsurpassed, and their skills in aerospace-tech is very useful for satellite weapons, and orbital bombers. Their mission is to spread their influence and philosophical ideologies throughout the population.

The Russian Federation is the most powerful nation in the world. At one time, the Federation controlled over 27,000,000 square miles of the earth's surface. Along with their massive land area, and power, they control the only area in space, mars, that humans have claimed.

The European Alliance, after being economically and technologically crushed by the Soviet Union, is a desperate nation in need of protection. Europe is no longer a major power, but can still hold its own, at least it could.

A decade after the alien war, tensions between Russia and Japan have hit a tipping point. Japan's spies are starting to notice rises in military funding, research, and production, and the Empire decides to attack first, while they have an advantage.

The conclusion to this war could change the course of history.

What faction will you fight for?

After many months of thinking, I eventually thought of the in-game Imperial arsenal. There are 2-3 'sub-factions' in the Japanese army. 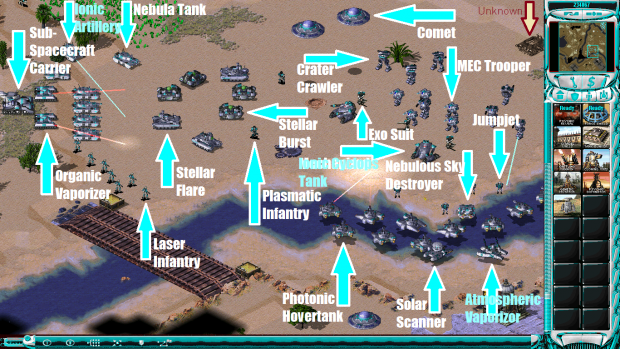 The Mechanized Imperial Arsenal uses advanced cybernetic and mechanical technologies to move quickly across the battlefield. They are the 'fastest' faction (will(technically) change in future updates :D) in the mod, but are weak, and have weak weapons. They are also the only Imperial sub arsenal that was being worked on before the Invasion. They use Plasmatic, Photonic, and Ionic weapons.

The Hover Imperial Tech uses advanced alien technologies to make vehicles more mobile over different terrain types, including water. Hover units use low to medium armor and medium to high damage. The technologies used to do this were original They use Ionic and Photonic and Micro-Missile weapons.

The Japanese Alien Plasmatic units are slow, but their power outmatches their speed in every way. Besides possibly kinetic weapons, the Plasmatic weapons are the most advanced, and powerful, weapons in the mod. All plasma weapons have a built in plasma reactor, and they have a tendency to overheat, and thus, they must be fired slowly, and move slowly. They obviously only use plasmatic weapons.

All of the European Units, and their different tiers.

Sorry for being gone

I explain why I've been gone, and what I've been doing for the last month.

I'm going to use public assets for my unit models instead of making them myself.

Thank you, I will need the community to help me balance the mod when it's finished.

After 2 years i just realized this mod didn't have any progress.
Any problem?

Hey i could balance this mod
If you want

Will the Russians get new buildings too? They're not soviet anymore, the design doesn't really fit and it's dated.

That's a good point, I'll start looking for some. Thanks for the idea :D.

Thank you for the compliment, I hope 'after' this mod I might be able to create new mods that continue the story,(because this mod isn't based off of the lore to much, just to get people invested in it.) and I have started tracking New War, looks really good. :D

Mention your name while adding me ;)

We will talk about business :p

Looks good thus far! Can't wait to try it out. The split paths is something early C&Cs were severely lacking, and the lack of unit diversity was somewhat disappointing. If you need a beta tester, hit me up!

Thank you, sorry for being late, you could PM me your skype and I could send you one. And thank you for the compliment of course. :D